Noel Harrington from Castletownbere, who is likely to become the new Mayor of Cork County in June, having been selected this week by the Fine Gael party, which holds the majority of seats on Cork County Council. 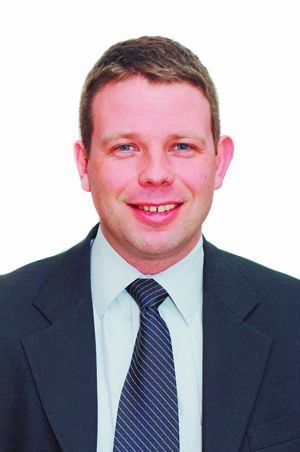 FUNDING for development offices on Ireland’s non-Gaeltacht islands has been secured.

‘This is great news for the island communities of Bere, Sherkin, Heir, Whiddy, Long and Dursey in West Cork, as well as Inishbofin in Galway and Inishturk and Clare Island in Mayo,’ according to Fine Gael TD Noel Harrington.

Minister for the Gaeltacht, Joe McHugh, TD, announced that the Local and Community Development Programme funding for the community groups will continue until the end of March 2015, pending the roll out of a revised new system which will be led by the Department of Arts, Heritage and the Gaeltacht.

Mr Harrington commended Minister McHugh for helping to secure the funds and pointed out that the minister had gained an insight and an appreciation of the challenges facing island communities when he visited both Sherkin and Bere islands last year.

Labour deputy Michael McCarthy also welcomed the news, saying he had pursued the matter directly with Minister Joe McHugh, Minister Alan Kelly and the Minister for Rural Affairs, Ann Phelan ‘highlighting the challenges faced by island communities and the vital need to protect, value and provide the necessary funding in order to sustain these communities into the future.’

John Walsh, development officer on Bere Island, said: ‘This is a very good start. There is a fund there, but it is up to us now to work with Minister Joe McHugh and the islands division to develop the new programme. It is positive news for the non Gaeltacht islands.’