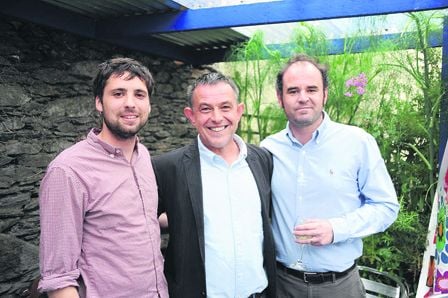 NOW in its seventh season, the West Cork Fit-up Theatre Festival returns this week, bringing professional theatre to the outlying villages and islands of the area.

It was set up as a joint initiative by Blood in the Alley theatre company and Cork County Council and has gained a reputation for presenting new and cutting edge theatre.

In recent years, productions such as Pat Kinevane’s Edinburgh award-winning Silent, Sonya Kelly’s Wheelchair on my Face, Rough Magic’s Jezabel and Blood in the Alley’s Under Milk Wood, have made the festival a ‘must-see’ for West Cork theatre lovers.

The festival opens this Thursday, July 16th, at a new venue, Spike Island, which is now managed by the Arts Department of Cork County Council, with Martin McDonagh’s comic masterpiece The Lonesome West. This black comedy was part of the Druid Leenane Trilogy that wowed audiences in the late 1990s and this production, directed by Geoff Gould and starring Rowan Finken, Denis Foley, Martin Lucey and Feadha Ni Chaoimhe promises to be a cracking modern interpretation of the piece.

Sonya Kelly will be remembered for her beautiful and funny production of Wheelchair on my Face, which had audiences rolling in the aisles in 2012 and her new play How to keep an Alien, winner of the Tiger Dublin Fringe Festival 2014, is an exquisitely-funny memoir told by a master of comic theatre.

The third week features a ‘double bill’ with John Doran’s The Centre of the Universe and the festival’s first ever international play, from English Theatre Berlin, Nick Hornby’s NippleJesus. Developed as part of the Show in a Bag Initiative, Doran brings his wit, versatility and magical observational skills to an unemployed man’s long-awaited job interview.

English Theatre Berlin are a company noted for producing compelling and discussion driven theatre and their new production of NippleJesus is no exception with director Gunther Grosser and Jesse Inman providing a warm and funny examination of our personal perspectives on art.

Boston based TirNa’s production of Jimmy Titanic completes the international dimension to this years festival. Written by Bernard McMullen and performed by Colin Hammell, the play is a unique and hilarious take on the story of the greatest ship ever built and has played to critical acclaim in the U.S.

So from Boston, Berlin and Ballydehob, once more, this year’s Fit-up Festival presents a masterful mix of compelling, interesting and most importantly high quality theatre which will leave audiences in West Cork discussing them long after the festival finishes. Tickets at the door of venues on show nights.