The rescue operation in full flow this afternoon 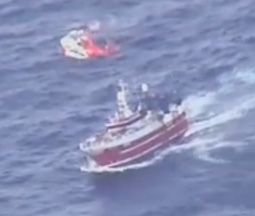 The rescue operation in full flow this afternoon

A FISHERMAN was this afternoon airlifted to Cork University Hospital after being successfully rescued by an Air Corps helicopter and coast guard unit off Kinsale.

The CASA crew were alerted to the mission while on a Maritime patrol 150 nautical miles West of Belmullet and arrived over the Irish registered vessel at 12:40 pm.

The CASA kept a watchful eye over the helicopter as it carried out the evacuation and co-ordinated with Air Traffic control and the Coast Guard for a speedy transfer of the patient from Cork Airport to Cork University Hospital.

Air Corps footage was taken during the evacuation operation by the CASA's FLIR.

To watch the operation, see here: