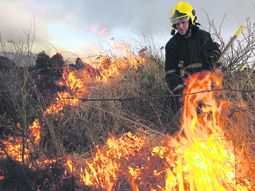 WEST Cork fire fighting crews were up against it on Sunday night with almost every service pressed into action.

Fire fighting teams from Schull and Bantry had to deal with the worst of it as they battled an illegally-set gorse fire three miles north of Glengarriff, a fire that one homeowner described as ‘terrifying.’

Sheena Wood recalled how Kurt Lyndorff, her partner at the Ewe Experience, returned ‘blistered and singed in the wee hours’ after he and their neighbours assisted fire fighters to tackle the blaze from 9.30pm until 2am.

Kurt Lyndorff said: ‘It is frightening how almost every year the mountains and hills are set ablaze when we have a prolonged dry spell, no matter that it is illegal and with no regard for the wild life, or the risk to forestry and property or indeed life.’

He maintained that it might take ‘the loss of life – maybe by someone fighting the fires – for the problem to be taken serious and for someone to be prosecuted,’ describing the latest fire as ‘the largest and most serious, I have yet encountered on the Esk Mountain in over 10 years.

‘It was started in several places on Saturday and again on Sunday, so it wasn’t just someone dropping a cigarette or similar accident.’

He described to The Southern Star what ‘an extremely daunting task’ it was to climb the mountain at night and be faced ‘with fires raging all around you, as far as the eye can see.

‘Fighting fires at night without proper equipment is not just daunting but also dangerous,’ he said. ‘You rely on a just good shovel to beat out the flames and principally have to work with the wind to force the fire towards a public road where it hopefully will stop. If the wind blows in the wrong direction you lose.

‘This latest fire was so hot: when the wind blew up just a small bit it sent the flames high, so you couldn’t get near enough with your shovel to beat it out.’ All the time, he said the fire fighters’ faces were burning from the heat and they were at risk of smoke inhalation.

Fortunately, on this occasion, the weather con ditions were not too windy and the wind changed direction favourably.

At the end of an exhausting night, Kurt said: ‘You collapse into bed with blisters on your hands and very sore limbs, but the next day you’re on tender hooks, hoping that you don’t have to face the madness again.

‘You are constantly looking to the skies dreaming of just a glimmer of rain, but fearing instead to see smoke rising from the mountains. But it is not until the rains come that you can really relax.’

As a sheep farmer, Kurt said, ‘We also see ourselves as custodians of our nature reserve on Esk Mountain and these fires are ravaging the fragile eco system.’

A lot of Kerry and West Cork was ablaze on Sunday night: fire brigades in the vicinity, including Bantry, were busy elsewhere so it fell to the Schull Fire Brigade to respond to the situation in Glengarriff.

A member of the team confirmed that the Schull crew, with the assistance of Bantry later that night, fought the fire for hours to protect houses on the high road and to keep the fire from encroaching into a nearby forest.

There was also a concern that the fire – through wind or a spark – might cross the main road and put the numerous houses on the lower road, just outside the village of Glengarriff, at risk.

It was a busy weekend all round as fire fighters managed to get a forest fire in the townland of Rossnacaheragh at Ahakista under control on Saturday afternoon, but not before several acres of the forest were burned.

On Saturday night there was a forest fire in Tooreen in Kealkil and fire fighters had to return to Kealkil again on Sunday afternoon because the fire had re-ignited.

When Bantry went to the assistance of Schull on Sunday night, they were called away for a time to check out yet another fire at Mounteensudder behind the Eccles Hotel, but they later returned to the hill fire on Esk Mountain.

That same night, crews from Castletownbere, Kenmare and Macroom were all dealing with gorse fires – as was the Skibbereen team who spent from 9pm until midnight getting a fire at Shepperton under control – and the level of activity prompted one station officer to pose the question: ‘What would happen if there was a life at risk call, such as a traffic accident? There would be no fire brigade available to attend.’