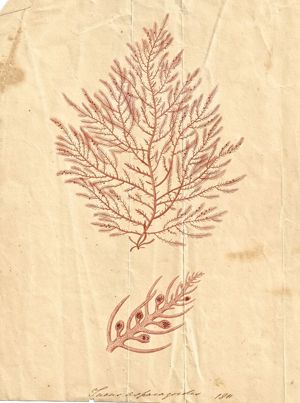 A FESTIVAL to celebrate the life of Ireland’s first female botanist, Ballylickey-born Ellen Hutchins, will take place during this year’s Heritage Week.

The festival is being organised in and around Bantry to celebrate the life and work of Ellen Hutchins who was born in Ballylickey in 1785. Ellen is widely regarded as Ireland’s first woman botanist and 2015 is the 200th anniversary of her death.

Ellen worked mostly with seaweeds, mosses, liverworts and lichens, discovering at least 10 species new to science that are named after her.

She was also an accomplished artist, producing exquisite botanical illustrations.

The festival will include a series of botanical walks to places such as Whiddy Island and Glengarriff Woods, local history walks in Ballylickey and Ardnagashel, with illustrated talks and two exhibitions.

One of the exhibitions will be in Bantry Library, focussing on Ellen’s life & work, and the other is in Bantry House, where her botanical art will be on display for the first time ever in Ireland.

Ellen is buried in an unmarked grave in Bantry, so the festival will include the unveiling of a plaque at the Garryvurcha Graveyard to commemorate her achievements as a scientist. It is also planned to erect a plaque at her birthplace in Ballylickey.

Botanist Donal Synnott, will also give a talk on ‘What the Eye Can See’, about Ellen’s botanical achievements, and there are pop-up exhibitions of books and letters belonging to Ellen, including one of her botanical dictionaries, which will appear at various locations during the week.

A small exhibition in Bantry Library will tell her story through words and pictures, and at Bantry House there will be an art exhibition of her watercolours of seaweeds (prints of some of those held at Kew Gardens).

This is the first time they will have been exhibited in Ireland.

Madeline Hutchins is giving a talk about Ellen’s life and work, and including new material found in recently discovered letters from her to her brothers, and to botanist James Townsend Mackay.

There will also be a little piece about Ellen and the discovery of some of her specimens in Trinity College Dublin’s herbarium on RTE radio’s Sunday Miscellany soon.

Ellen bequeathed her precious collection of plants to fellow botanist and friend Dawson Turner, much of which he passed to the Royal Botanical Gardens at Kew. Some specimens can be seen today at the Herbarium in the National Botanic Gardens at Glasnevin.

A field at Ballylickey, where she spent many hours tending plants, is known to this day as ‘Miss Ellen’s Garden’. Details of the life and work of Ellen Hutchins, and the history of the Hutchins family of Ballylickey House and Ardnagashel may be found in the book Voices from the Great Houses of Cork and Kerry written by Jane O’Hea O’Keeffe and published by Mercier Press in 2013.

Full details of all the events are listed on www.ellenhutchins.com or www.heritageweek.ie, or on local fliers in libraries and in local tourist offices.