Tim Crowley, author with Clíodhna O'Leary, editor of In Search Of Michael Collins. 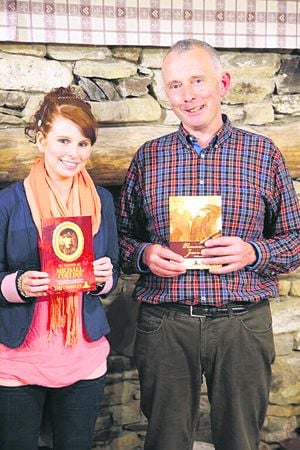 Tim Crowley, author with Clíodhna O’Leary, editor of In Search Of Michael Collins.

MORE than 100 people turned up for a special double launch of a new book on Michael Collins and a very old journal which, it was revealed, lies at the heart of a secret family tragedy.

The fascinating story of how a lonely West Cork farmhouse was invaded by a group of armed and desperate men who terrorised the woman of the house and released a gunshot through the ceiling, was revealed during the launch outside Clonakilty.

The second, Marianne’s Journal, is a journal penned by Crowley’s great-grandmother, Marianne Slyne née McCarthy – and launched by her grandson Dan Crowley at the weekend.

Slyne, who was a second cousin to Michael Collins’ mother, began her fascinating journal in the 1870s, and over the years made several references to the family of Michael Collins – in fact her final entry summarises the events surrounding the death of Collins at Béal na Bláth on August 22nd 1922.

However, Slyne then stopped writing in her journal – and nobody knew why.

However, at the function, which was attended by, among others, the Mayor of Clonakilty, Cionnaith O Suilleabhain, and representatives of several local historical societies, Crowley revealed that Slyne stopped writing after she was deeply affected by a violent incursion into her home.

One night in 1922 or 1923, a band of anti-Treaty IRA fighters entered her farmhouse kitchen near Enniskeane, demanding a horse from her stable.

Being on the other side of the Civil War divide, Marianne Slyne stoutly refused to give them a horse, and angered by her refusal, one of the IRA men fired a shot through the ceiling – straight into the bedroom upstairs where Slyne’s young daughter Elizabeth was lying in bed.

Initially Marianne thought her daughter – who would later become Crowley’s grandmother – had been killed, and although this soon proved not to be the case, the invasion into her home upset her to such an extent she suffered a nervous breakdown and never again wrote in her journal.

‘I am involved in history all my life and I never knew this until recently – at that time any form of mental illness was always hidden away, and this is why we never knew until lately what happened,’ says Crowley who has now had the journal scanned and published in book form.

‘This story is an example of how ordinary people suffered because of what happened during the War of Independence and the Civil War,’ he said. At the launch, great emphasis was placed on the importance of local history, he added.

‘We have an opportunity now over the next few years to really acknowledge our past. My book is a guide to the history of sites connected with Michael Collins and will be of interest for those who wish to visit these historical places,’ he said, adding that the people of West Cork had great pride in their history.

Crowley’s 120-page book, acts both as a guide to the main sites of interest relating to Collins in the West Cork, such as his birthplace at Woodfield, and the site of his death at Béal na Bláth, and also as a treasure-chest of historical facts and interesting nuggets about the life of Michael Collins.

The front cover of the book is a photograph of Collins in uniform in 1917, taken in O’Crowley’s Photographic Studio at Pearse Street in Clonakilty.

*In Search of Michael Collins (€10) is available at the centre or in bookshops in Bandon and Clonakilty.