Minister for the Marine Simon Coveney was in West Cork this week to perform a number of duties. 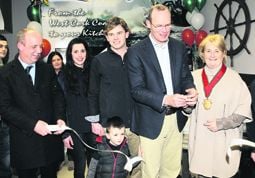 MINISTER for the Marine Simon Coveney was in West Cork this week to perform a number of duties.

The Cork-born Minister, a regular visitor to West Cork, was on hand to officially open Peter Shanahan’s new fish deli in Clonakilty on Monday evening.

Earlier in the day, the Minister had dropped into Hegarty’s boatyard to nail the last plank into the Ilen boat which is being restored at the yard.

And everything was certainly ship-shape when the minister inspected the final stages of the work that is being carried out to Cape Clear harbour that morning.

In the company of Noel Harrington TD, and Cormac O Donoghue, an engineer with the Department of Marine, Minister Coveney enjoyed a special early sailing from Baltimore to Cape Clear.

Visiting Oileán Chléire is nothing new for the minister. He reminded the gathering at Club Cléire that he has been coming to the island ever since he was a toddler.

In all that time, he said the harbour had hardly changed. However, when large, dangerous cracks appeared in Bull’s Nose, a €4.5m project to upgrade the harbour was swiftly approved by his department.

The minister told the islanders he was certain that the size, scale and quality of the workmanship involved in the project would be a source of pride for them for many years to come.

Although the project is very complex, island representative, Séamus O’Driscoll said: ‘We were fortunate that the weather was kind, especially during the insertion of the dock gate last September, and, in the end, it slotted in like Lego.’

The next major challenge will take place on March 3rd and 4th when the storm gates are due to arrive.