Members of the Old Head Seven Heads Coastguard unit at the slipway in Dunworley, near Butlerstown. (Photo: Martin Walsh)

BUTLERSTOWN woman Amy Walsh and her son Michael (17) most certainly saved the life of a young female swimmer, who was dramatically rescued from a sinkhole close to the slipway in Dunworley Beach near Butlerstown yesterday.

Indeed, there were many other heroes in the rescue including the Old Head/Seven Heads Coastguard crew, who brought the casualty to safety after some 90 minutes in the water.

As one of the sunniest days of recent times came to a close, Amy and Michael were out walking (around 5pm) in Dunworley, a favourite and very scenic part of the region.

They noticed a towel on the ground near the sinkhole and rather than dismiss it as something left behind or discarded, and with nobody else about, they decided to shout down the sinkhole ‘Is anybody there?’

To their astonishment, a reply of ‘help’ came back.  Immediately, Amy rang the emergency services as Michael went to acquire a buoyancy aid.  He dropped it down the sinkhole and after a short time, the stricken swimmer, who was wearing a quality wetsuit, took hold of the other end.

Michael, a pupil of a the Young Mariner’s course in Kinsale, put his skills into play, ensuring the casualty stayed calm and constantly kept speaking with her. 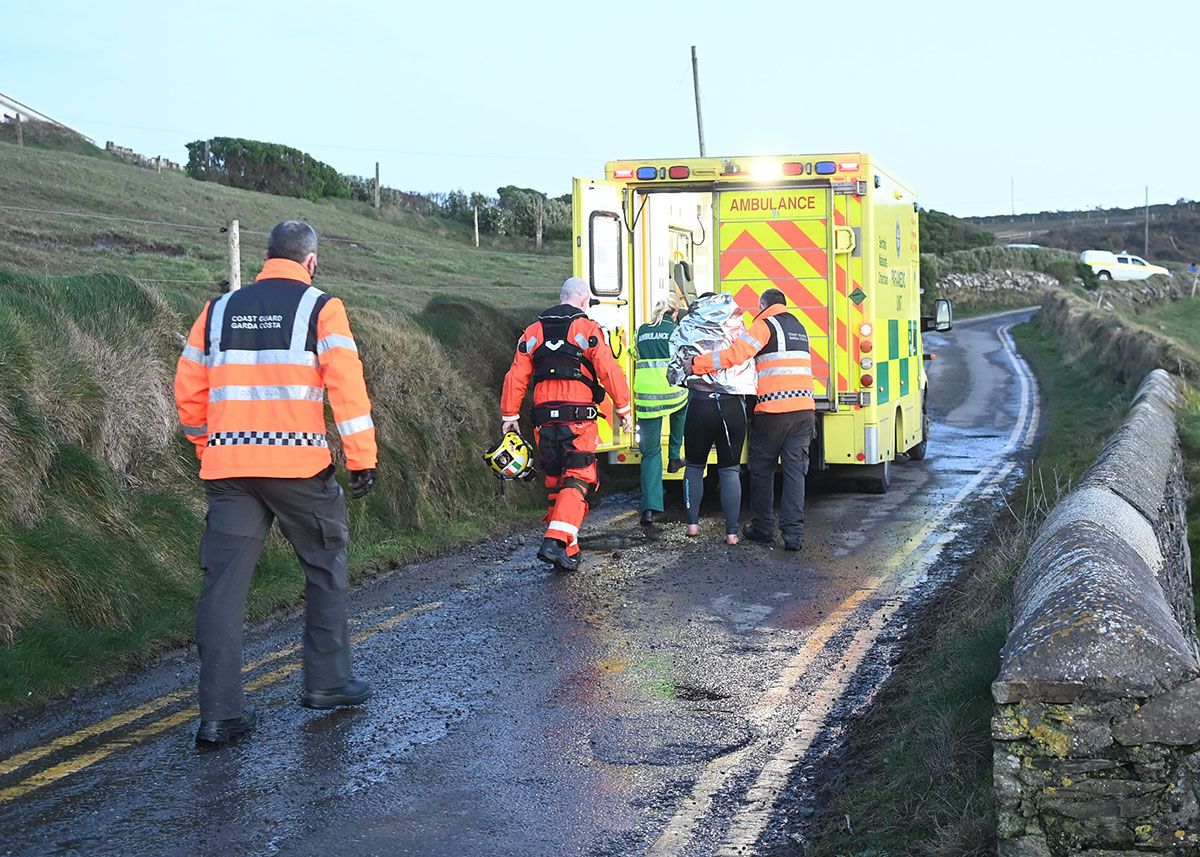 The young lady swimmer being helped into the ambulance. (Photo: Martin Walsh)

The all-weather Trent Class Frederick Storey Cockburn Courtmacsherry Lifeboat was at the scene within 15 minutes and was joined by the 18-strong Old Head/Seven Heads Coast Guard crew while the Coast Guard 115 helicopter from Shannon and the HSE Ambulance and gardai also arrived at the scene.

Two members of the Old Head/Seven Heads Coastguard crew rigged themselves to climb down the sinkhole to access the causality, who it appears got caught in the swelling tide.

Other members of the coastguard having mounted their rock climbing apparatus, lowered the two members into the inlet to locate the trapped swimmer.  Negotiating the sinkhole, she was brought to safety by the coastguard personnel and covered with a protective sheet was brought to the waiting HSE ambulance for observation.  All remaining services were subsequently stood down.  Luckily, the story had a happy ending, but only for the observances of astute walkers Amy and Michael Walsh.