Lt Cdr Donnchadh Cahalane with his wife Valerie and sons Darragh and Olan celebrating the 75th anniversary of the Irish Naval Service in Cork city.

OF all the towns in West Cork, Dunmanway is not the one most people would associate with the Irish Navy.

But, as it happens, two of the four naval captains who took part in a major 75th anniversary celebration at the weekend can claim ties to the town.

Both men joined as cadets at the same time in September 2002, but the coincidences don’t end there.

Another classmate, Lt Cdr Sean Linehan from Douglas was the third captain on board the LE Samuel Beckett at the 75th celebrations.

‘The three of us progressed at the same time and are fortunate to have come into command within a space of four weeks on three of the newest ships in the fleet,’ Jamie told The Southern Star.

The captain of the LE William Butler Yeats, LT Cdr Martin Tarrant from Cobh, cannot claim such an association, but all four did work together to put on an impressive fleet review by the Taoiseach Micheál Martin in Cobh last weekend.

The Irish Naval Service actually began its 75th celebrations on earlier this month when the Minister For Defence received a Navy 50 Guard of Honour in Dun Laoghaire. 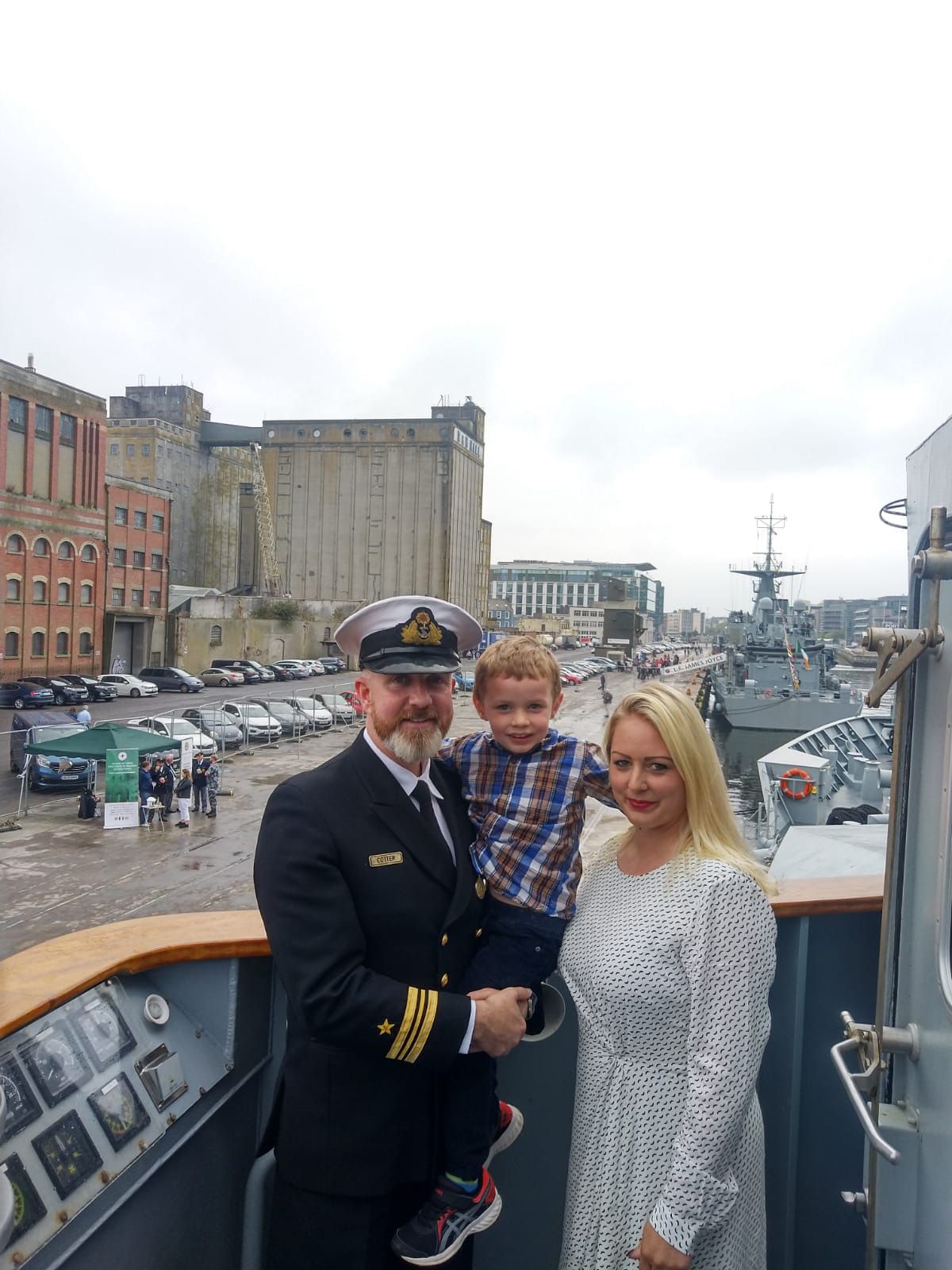 Lt Cdr Jamie Cotter with his son Frankie and wife Ayesha, on the bridge of the LE George Bernard Shaw in Cork.

A salute was exchanged between the LE Samuel Beckett and her sister ships on Sir John Rogerson’s Quay and then the ships were opened to the public to allow the public to ‘meet the fleet.’

On Saturday morning, the LE James Joyce, the LE William Butler Yeats and the LE George Bernard Shaw anchored in front of Cobh.

The Taoiseach on board the LE Samuel Beckett conducted a fleet review, after which the navy flotilla made its way to Kennedy Quays in City, where there was another chance to meet the fleet.

Due to Covid-19 restrictions, the public hasn’t had the opportunity to see the ships conduct such classic manoeuvres, go below deck on the new ships, or met the crew.

In fact, a lot of the crew never had the opportunity to bring their own families on board.

That was true, too, for both Donnchadh and Jamie.

Last Saturday, Donnchadh was thrilled to welcome, for the first time, his two boys Darragh (4) and Olan (2) on board.

‘They’ve never been on the ship that daddy goes to sea on,’ said Donnchadh while Jamie said his son Frankie (4) was also thrilled to see his ‘dad’s ship.’

Jamie explained how he and his wife’s Ayesha came to live in Dunmanway.

‘I’m born and bred in Crosshaven and Ayesha’s family is from Ballydehob.

‘After I got promoted, I was required to be away from home for significant periods,’ he said.

‘My wife preferred to split the distance between my family base and her family so we started looking around and we decided to settle in Dunmanway because it is a beautiful town with fantastic facilities for a growing boy – the pool, the park and the great schools.’

Both Donnchadh and Jamie said they couldn’t endorse the navy highly enough as a career choice.

‘The naval service has given me some amazing opportunities,’ said Jamie, ‘I would recommend it to anyone looking for job satisfaction.’