'THE local Christian communities were in agreement in their efforts to quell the cult of violence, but the spiral was unstoppable. The murders are a warning from history to seek reconciliation and understanding. Conflict leaves deadly scars and poisonous grievances, that require generations of healing and mutual tolerance, and even then that is often insufficient.’

So said Dr Mervyn O’Driscoll, Head of History at UCC, in his graveside oration marking the centenary of the deaths of Thomas Canon Magner and Tadhg Crowley in Dunmanway in December 1920, which was commemorated on Sunday last in a very meaningful ceremony.

It started with a mass celebrated by Fr Ted Collins, P. P. in St Patrick’s Church, Dunmanway. One of the offertory gifts was the rosary beads belonging to the late Canon Manger. These beads were retrieved from the scene of the murders by Major Black, OC of the military barracks in Dunmanway at the time. His daughter later took them to Australia when she emigrated there at a later stage.

On a holiday visit to Glengarriff in 1994, she met a charming lady from Ballineen who convinced her to return the beads to Ireland. As a result, the beads were repatriated and are in safekeeping now in Ballineen. 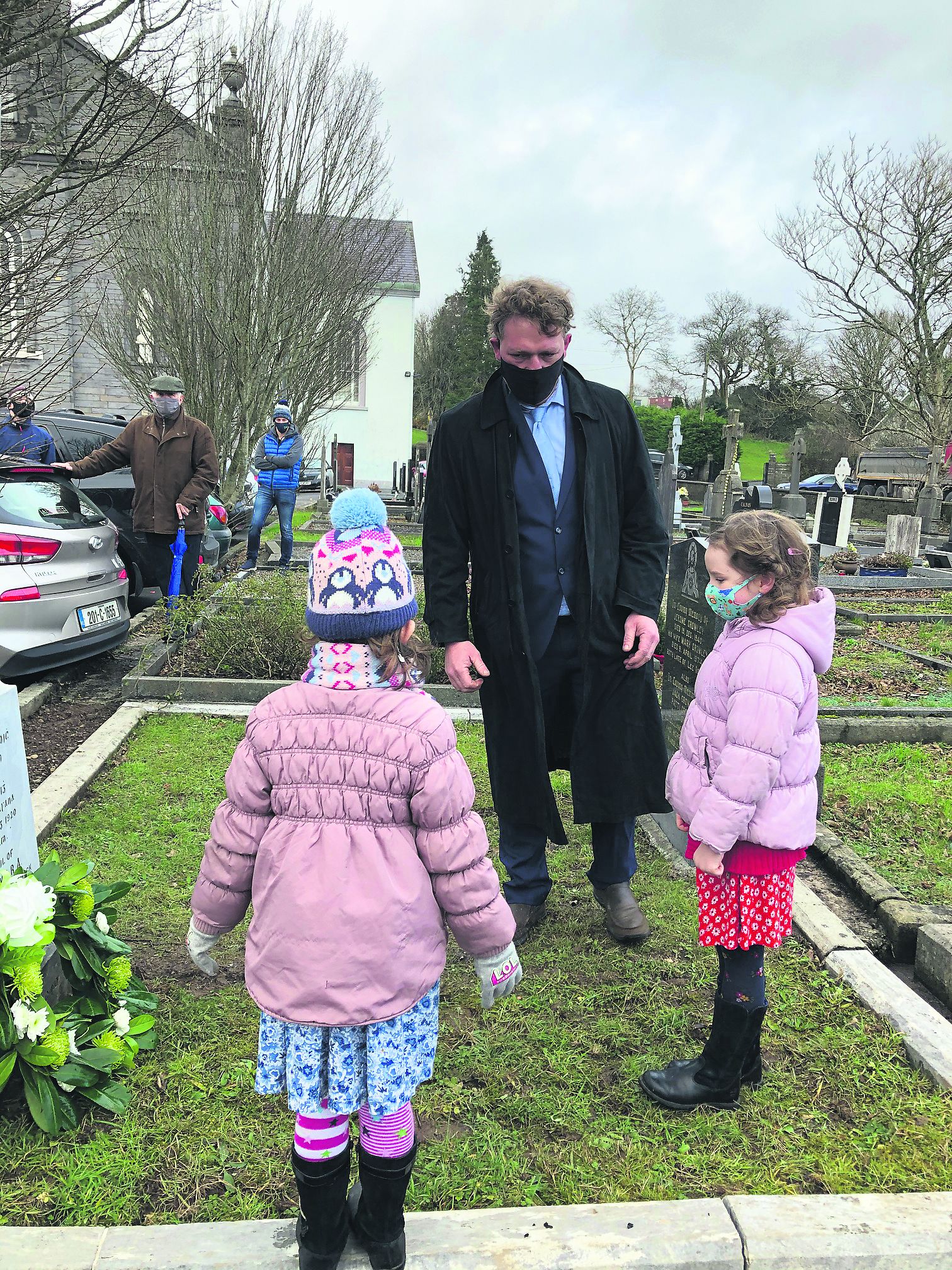 Wreaths being laid on the grave of Tadhg Crowley by grandnephew Donal Mehigan and Tadhg's two grandnieces.

It is fitting that the beads were re-united with Canon Magner on his one hundredth anniversary when Fr Ted Collins led a decade of the rosary at the graveside. Rev Cliff Jeffers, Church of Ireland, and Fr Ted Collins led the blessing of the graves in St Patrick’s churchyard. Rev Cliff presented the original minute book of the Select Vestry.

In it are the minutes of a special meeting convened to convey the sincere condolences of the Church of Ireland community on the tragic death of Canon Magner. This gesture is indicative of the heartfelt and genuine horror felt by all the community and across all the religious divide at the time.

‘Let the main focus of today,’ said Dr O’Driscoll, ‘be that of reconciliation and acceptance.’

Tommy Collins, leader of the organising committee, acted as MC, saying that we acknowledge the ultimate sacrifice of these two men who were innocent bystanders caught up in a cycle of violence that was witnessed in 1920 and well into 1921.

Very fittingly wreaths were laid on the grave of Tadhg Crowley by his grandnephew Donal Mehigan and Tadhg's two grandnieces.

Afterwards, a wreath-laying ceremony was held at the monument at Ballyhalwick – the scene of their deaths. The blessing again was imparted by Rev Cliff Jeffers and Fr Ted Collins. A wreath was laid by Tommy Collins and by Joe Cronin on behalf of the Magner family.

Filmmaker Brendan Hayes stated: ‘I was privileged to be able to assist the community council and the church by coming together with my family local and abroad along with the O’Donovan Family, Market Square, Dunmanway, to raise the funds needed to restore both graves.’

The monument on the eastern side of town along with the graves were professionally restored by Billy Murphy of Murphy Memorials.