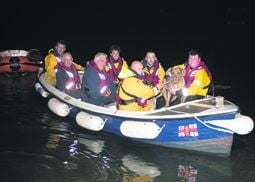 KAYDO the dog – a Rhodesian Ridgeback from Leap – was the focus of an unusual rescue operation by the crew of the all-weather Courtmacsherry Lifeboat at the weekend.

According to crew member Mícheál Hurley, who celebrated his 60th the next day, the canine rescue was a ‘first’ for this crew.

Just minutes after completing another challenging rescue on Friday night, the crew, under coxswain Sean O’Farrell, responded to an emergency call from Valentia Coastguard.

They were told a large dog had fallen off the high cliffs at Fil Na Mho (Field of the Cows) near Broad Strand in Courtmacsherry bay.

The dog’s owner had attempted to climb down the cliff to retrieve his pet, but had failed in his efforts and subsequently put himself in danger.

‘The owner alerted the rescue services through a 999 call just before 9pm,

In the knowledge that his dog was safe, the owner then climbed to safe ground. The muzzled dog was taken on board the lifeboat and later reunited with its delighted owner at the slipway of the RNLI station in Courtmacsherry.

‘Within minutes of the call, the lifeboat arrived at the base of the cliffs,’ Mr O’Donovan recalled.

‘The boat – the Sir Frederick Storey Cockburn – by using its powerful engines and spotlights, located the stricken dog on the water’s edge.’

Earlier, the crew rescued a 60-foot fishing vessel that got into difficulty in windy conditions, two miles off the rocks at Seven Heads.

The vessel, with a crew of five, was towed back to Courtmacsherry pier.

And on Saturday afternoon, a 55-foot fishing vessel and its crew of six were towed to Kinsale harbour after encountering difficulties two miles south of the Old Head.

Courtmacsherry RNLI Lifeboat operations manager Brian O’Dwyer said the callouts displayed the ability of the crew and boat to deal with very serious situations quickly and efficiently in dangerous terrain.