Tim Looney of the West Cork Hotel with guest Ronny Cox in Skibbereen this week and, inset, Ronny in the 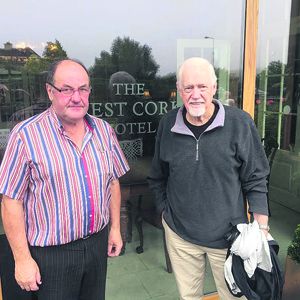 Tim Looney of the West Cork Hotel with guest Ronny Cox in Skibbereen this week.

HOLLYWOOD actor Ronny Cox was glad to see the rain when he arrived in Skibbereen earlier this week.

The veteran actor and musician flew in from Los Angeles, which is experiencing one of its worst droughts in years, so the ‘Irish summer’ was a welcome respite for him.

‘This is my sixth year coming to Skibbereen and I’m here with a group of people visiting Cork, Kerry and Clare. I’m passionate about singers and songwriters so we plan to see a lot of music while we’re here,’ said Ronnie speaking to The Southern Star.

Best-known for his role in the 70s brutal outdoor thriller Deliverance, Ronny has had a wonderful career starring in films like Total Recall, Beverly Hills Cop and Robocop, and his latest film Beyond The Reach was just released in the States where he stars alongside Michael Douglas and Jeremy Irvine.

‘I have had a wonderful career in acting and I’ve turned down many a role as it’s the music and story telling that I’m passionate about. I was a musician before I got into acting and that’s one of the reasons I got the role in Deliverance in 1972.’

Ronny is famous for his role as Drew, who took part in the famous ‘duelling banjos’ scene from the film and he said he played the instrument in that iconic scene, from Irish director John Boorman.

‘We shot Deliverance in sequence which was very unusual at the time, and we did all the canoeing and stunt work ourselves, so by the time we got to the hard rapids we had become well trained. It’s hard to believe that it’s been 45 years since the book was released and that was coincidentally both mine, and Ned Beatty’s, first film roles.’

‘I haven’t seen John Boorman in about eight years, but I would love to meet him as I’m a huge admirer of his,’ he said.