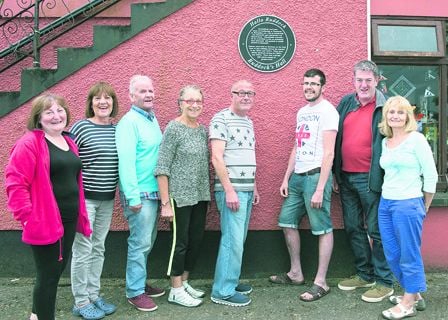 HUNDREDS of people turned up to watch the unveiling of three cast-iron plaques marking historical landmarks in Courtmacsherry – and then enjoyed a celebratory breakfast together in the local community hall.

The three plaques are the first in a series of eight which have been specially commissioned to recall the Victorian heyday of the West Cork village, once a popular seaside resort boasting its own railway station, dance-hall, cinema, petrol station and some 17 shops.

Sunday July 19th saw the completion of the first phase in the special planned history trail of eight beautifully-produced plaques, which will together form a local history trail around the village, in a €5,500 initiative between the local historical society and the Tidy Towns group.

Mr O’Mahony is a founding member of the local historical society, which published a book on the village’s history.

‘That book was the inspiration for the plaques,; said Richard May of the local Tidy Towns Committee, who said a great day was had by the unexpectedly large crowd which attended the unveiling.

One plaque is now on display on the village pier, commemorating Courtmacsherry’s history in the 19th century as a busy and important port.

The second was unveiled at Ruddock’s Hall, which at one time was a colourful local community centre, comprising the village cinema, dance hall and patrol station, while the third highlights the existence of what is known as O’Donovan’s Shop, one of 17 shops originally in the village.

“We had a very kind sponsor who has agreed to pay for a plaque on what was his home place, formerly known as O’Donovan’s Shop on Main Street,’ said Mr May, who added that people who would like to donate a plaque in memory of a village landmark with which their family had an association, are welcome to contact the organising committee.

Five more plaques – three of which are expected to be ready by September in time to be unveiled during the October Bank Holiday weekend – are currently due to be manufactured.

Each will commemorate a well-known landmark such as Craigie House, which was originally the old national school dating from the 1800s and part of the Earl of Shannon’s Estate.

Another will recall a group of cottages referred to locally as ‘Siberia’, as well as the Courtmacsherry Hotel, originally the Earl’s residence.

Yet another plaque will highlight the proliferation of tea-rooms which sprang up in local homes every summer to serve tourists and day-trippers.

All the plaques, whose texts are in both Irish and English, are expected to be in place in place by the end of next year, or early 2017.

The plaques are being paid for through a combination of fund-raising locally and a small amenity grant from Cork County Council.