A text message which read 'Must get fit for murder' was found backed up onto Elaine O'Hara's laptop, the Graham Dwyer trial has heard. 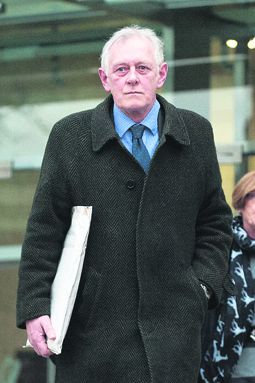 A TEXT message which read ‘Must get fit for murder’ was found backed up onto Elaine O’Hara’s laptop, the Graham Dwyer trial has heard.

The jury in the Bandon architect’s murder trial also heard that the number sending the message was attributed to a person called ‘Graham’ elsewhere on her computer.

Mr Dwyer (42) is charged with 36-year-old Ms O’Hara’s murder at Killakee, Rathfarnham, south Dublin on August 22nd, 2012, hours after she was discharged from a mental health hospital.

The Cork-born father of three of Kerrymount Close, Foxrock, Dublin has pleaded not guilty to murdering the childcare worker on that date.

The jury in the Central Criminal Court has heard evidence from computer crime experts, who examined Ms O’Hara’s Apple Mac with which an iPhone had been synced.

Detective Garda Brid Wallace of the Computer Crime Unit carried out the first step of the process to extract text messages that had been backed up onto the laptop.

She said she had also identified an 083 number in Ms O’Hara’s calendar as part of her examination of a forensic copy of its hard drive.

The jury was shown a screen shot of the calendar from June 30th 2011 with a phone number on it and the words ‘Graham’s phone number’ before it.

The jury was also shown screen shots of text messages sent to an iPhone including: ‘Good, looking forward to getting new bike tomorrow to try and lose weight.’ Another read: ‘Must get fit for the murder.’

Another message from that 083 number read: ‘Terrible. 15% pay cut and came 5th in flying.’

Other messages read: ‘Yes, beautiful baby girl (name of child). Glad you enjoyed the other night. Many more sessions like it to come. See u sometime over the weekend.’

The next message read out had been sent in the opposite direction. It read: ‘Sir, any chance you can get an 086 phone sim? I get free texts.’

An employee of the O2 store on Grafton St in Dublin testified that he sold two Nokia mobile phones to one person on November 30th, 2011.

Paul Healy identified a sales receipt and written in the section for customer name were the words: ‘Mr. Asked – Not given.’

Mr Healy explained that, at the time, a customer did not have to supply details when making a pre-pay purchase. This has changed now, he said.

Earlier, the court heard that Elaine O’Hara showed signs of a passive death wish in the weeks before she disappeared.

The trial heard that the alleged victim told staff at a psychiatric hospital 15 days earlier that she wished she wouldn’t wake up.

The trial also heard that Ms O’Hara told staff at St Edmundsbury Hospital in Lucan, Co Dublin, that she thought of ripping her own arms out – and had thoughts of suicide.

Matt Murphy, a retired consultant psychiatrist at St Edmundsbury Hospital, told the court he had been caring for Ms O’Hara since 2007, but that she had first been seen by the now deceased Professor Anthony Clare in August 1992.

He believed she was suffering from a personality disorder. She had first presented to Professor Clare in August 1992 with persistent, obsessional thoughts and fantasies.

She had been getting these thoughts from the age of the 12 and said she had a play in her head.

‘I think the diagnosis we’d all have concurred with would have been borderline personality disorder,’ he said, explaining that this illness involved extremely low self-esteem, feeling worthless and valueless.

However, the witness said that there were also indications of harm being inflicted by others in a context where she participated. He described this as masochistic behaviour.

She had reported from April 2008 that she had told the man in question that she wanted to desist from the practice. By February 2009 she reported that it had stopped, but that she felt like contacting the man again.

In July 2011, she reported that she’d been pregnant but that she had lost the baby at four or five weeks.

Dr Murphy said that by 2012 she was on a reduced dose of medication and was receiving cognitive behavioural therapy.

‘I would have thought she was doing pretty well,’ he said. ‘Particularly in the last year of her life, there was a significant improvement.’

He said he could see distinct progress in her that year.

However, she phoned the hospital in July 2012 to say she felt depressed and was thinking about suicide.

The report also said she had ‘anhedonism’, which he said was an inability to enjoy life.

He made the decision to admit her. He said he didn’t want her to feel rejected by the hospital, as she was prone to feelings of rejection.

The entry for the same day added that Elaine had had a long standing problem with anxiety since she was 12.

The note, by a registrar, added: ‘She denies CSA (child sexual abuse) but refused to discuss any details from that time.’

It also said that she reported being bullied a lot in school.

Asked if there was any indication of suicidality at her discharge on August 22nd, he replied: ‘No, none’.

‘She was talking in different terms about life, doing things, engaging in life,’ he said, adding that there was no talk of self-harm.

Under cross examination by the defence, Dr Murphy agreed that her 14 admissions to the hospital over the years were more than the average number.

He agreed that, following her disappearance, he told Gardaí that her final admission was ‘something of an emergency in that Elaine had suicidal thoughts’.

When asked about the triggers for self-harm, Ms O’Hara had said she just wanted to mark her mental pain ‘by it becoming physically real’.

‘Some people get relief from mental anguish by replacing it with physical pain,’ explained the doctor.

A clinical nurse manager from the hospital also gave evidence of his dealings with Ms O’Hara.

Damien Lanigan agreed that, years ago, she had mentioned soliciting someone to harm and possibly kill her. He was also aware that she previously had an interest in the ‘S&M’ lifestyle and had met other parties to engage in sexual practices.

He said he saw no evidence of self-harm during her 2012 stay in hospital and that her father used to visit her there.

Under cross examination by the defence, he confirmed that he was aware that Ms O’Hara had taken part in strange sexual practices with strangers. He was aware that she had arranged to meet these people over the internet.

A garda computer expert later told the trial that she found a reference to ‘Graham’s phone number’ in a laptop owned by alleged victim Elaine O’Hara.