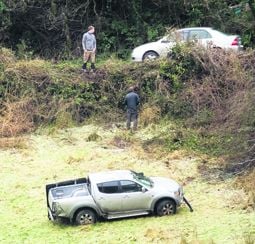 Locals survey the scene of an accident in January when the driver of a pick-up truck was lucky to escape unhurt after his vehicle skidded on black ice, and turned over several times, on the road between Kealkil and Ballingeary. (Photo: Ben Russell)

ROAD users have a ‘duty of care’ and the main responsibility for safety rests with the motorist, a Cork County Council spokesperson said this week.

The Council was responding to queries on the treatment of West Cork roads in the current spell of icy weather.

A number of motorists contacted The Southern Star in recent weeks to enquire about the regularity of gritting the roads in icy weather.

Commenting on our Facebook page, many said that the level of gritting on local roads was very poor in West Cork, with some saying they hadn’t noticed any gritting this year so far.

‘Treated roads can be affected by many variables including localised showers of rain which wash the salt off the road,’ according to a statement from senior Council engineer John Donegan, in charge of road operations for the South & West region.

He added that the objective of the Council’s winter service plan is to provide ‘so far as is reasonably practical’ for the safe movement of road users on the National Roads and other strategic routes identified during adverse weather conditions.

He further said that the Council’s response ‘can be impacted by the severity of the weather and the available resources’, which include funding, manpower, equipment, and salt supplies.

Cork County Council is responsible for the maintenance of 388km of National Roads and 11,720km of regional and local roads. ‘

Therefore, it is not feasible to treat all public thoroughfares and it is necessary to create a schedule of route prioritisation.’

As a result, roads are given a priority rating between 1 and 3, based upon the road classification, the traffic volume carried, public transport usage, and the importance of the route on a national, regional, or local level.

One of the roads mentioned by readers was the R585 between Crookstown and Kealkill, and also the R587 / R584 between Dunmanway and Macroom, via Kilmichael. ‘Both are listed as Priority 2 routes on the winter service plan.

During the current cold spell, over the past 28 days, these routes have been treated 24 times mainly in the evening but on four occasions the treatment was in the early morning, typically around 5am,’ Mr Donegan said.

‘With regards to safety on roads, I wish to highlight that road users have a duty of care and that the primary responsibility for safety rests with the road user even when routes are treated,’ he added.

‘Treated roads can be affected by many variables including localised showers of rain which wash the salt off the road, etc,’ he concluded.

To see what priority your road has, and the type of equipment available in your area, you can see the Council’s Winter Service Plan for 2015 here: http://www.corkcoco.ie/co/pdf/260123926.pdf