Up to 120 people will be employed during the peak construction of the new Community School in Skibbereen, with more than half of those coming from the locality. 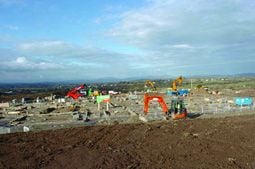 Site of the new Community School in Skibbereen.

UP to 120 people will be employed during the peak construction of the new Community School in Skibbereen, with more than half of those coming from the locality.

The figures were confirmed by Paul Roche, a director of BAM Building, the company building the €14m school at Pound Hill in the town.

Mr Roche was in Skibbereen on Thursday last as Education Minister Jan O’Sullivan turned the first sod on the new project.

Mr Roche confirmed that the clearing of the site actually started on January 5th last, and by mid-month the on-site offices were put in place.

Since then there have been about 25 men on-site full-time, working on foundations for the 10,500sq m building.

Mr Roche said the number of people employed on site will gradually increase and when the company is fitting out the building – in January, February, March and April of next year – the numbers employed will peak at about 120.

Once the foundation is poured, the pre-cast concrete frame will be trucked in and erected on top of the ground floor, a process that is likely to take until the end of June.

The next phase will involve the erection of a structural steel roof between June and September. May 2016 has been set as the date for the completion of a project, which is expected to create a major economic spin-off for the town.

The two-storey building – which will accommodate 900 students – was designed by architects Mullarkey Pedersen, and Wilson Architecture of Cork have been engaged to do the detailed designs.

The elevated site at Pound Hill looked like an ant colony the day the minister visited, with multiple men in yellow hard hats all focused on ground work in one particular area, the school’s special needs unit – an impressive 760sq m wing of the building.

Mr Roche explained that the school will be located in the centre of the 19-acre site and the teachers’ car park, basketball court, and other sports courts, as well as the GAA pitch, will all be located between the new school and the existing road leading to Gortnacloghy. A walkway will lead students back down to Rossa College and into town.