Race organiser Bob Hilliard gives the thumbs up with Team Hoyt at the beginning of the marathon in Courtmacsherry. 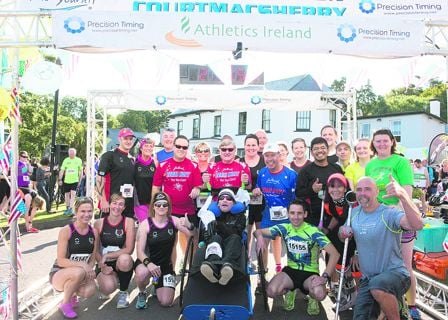 Race organiser Bob Hilliard gives the thumbs up with Team Hoyt at the beginning of the marathon in Courtmacsherry.

THE father and son duo that make up Team Hoyt, touched the hearts of hundreds of both runners and spectators in Courtmacsherry.

Dick Hoyt, now in his 70s and his son Rick, who is in his early 50s, are world-famous for competing in over 1,200 marathons, triathlons and road races, despite Rick being confined to a wheelchair.

They were taking part in the Keith Whyte Waterfront Ultra Marathon III and for the first time ever, each and every runner during the marathon pushed Rick at some stage during the race, something which hadn’t happened before.

‘We formed the MCI Team Hoyt International, a crew of West Cork people, and Val Fogarty organised that each and every runner got to push Rick at some stage after his dad Dick led him out at the start,’ said Bob Hilliard, organiser of the event, speaking to The Southern Star.

‘Rick loved it and it was inspirational to see.’ The Hoyts were invited to take part in this year’s event by Bob, who met them at the Boston Marathon in 2013 following the bomb attacks.

As well as taking part in the marathon, they also gave two inspiring talks at the Quality Hotel in Clonakilty on their amazing life story.

‘It was an incredible weekend and Team Hoyt were blown away with the Irish hospitality. This was Rick’s first time outside the US in 12 years so it was amazing for him to travel there.’

‘We had full houses too for their talks in Clonakilty and they spent the weekend hugging and shaking hands with everyone. It took about two years to bring him over and I think that the fact we asked him personally is the reason why he accepted and he wants to come back again for next year’s event.’

In fact they inspired another runner, Cian Kerr from Northern Ireland to push his own disable son in a Hoyt racing chair for the race.