There are plenty of laughs to be had in West Cork this weekend as Kilmeen Drama Group stages 'It's The Real McCoy' in Rossmore and Skibbereen Theatre Society puts on 'Many Happy Returns' at their local Town Hall. 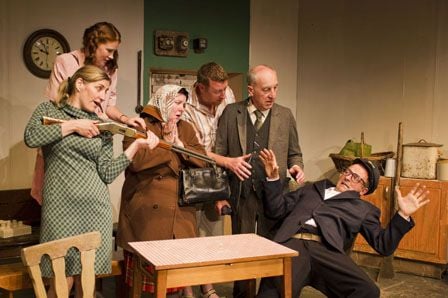 It's the Real McCoy

KILMEEN Drama Group’s summer hit comedy, Tommy Marren’s It’s The Real McCoy, directed by Gerard Finn, is back at St Mary’s Theatre in Rossmore this week, having opened on Tuesday night. It will be staged again this Friday and Saturday, January 2nd and 3rd.

This quite madcap rural comedy, It’s The Real McCoy is set in the mid 1960s. Its main character is Madge Molloy (played by Sheila Wall) who has spent over 40 years of her life in despair following the disappearance of her husband for no apparent reason. Then, the new parish curate Fr Michael Mc Coy (played by Ian Flavin) brings news about her husband Tom (Michael O’Mahony) and his wish to return to her to explain why he left.

However, Madge has to contend with the fact that her only child Maura (played by Crona Mc Carthy) has fallen in love with the local postman, Martin Daly (played by Michael Crowley) and she doesn’t approve. She also has regular full-blown confrontations with the two nosiest neighbours in Ireland, Nora and Cora O’Hora (played by Rosarie Murphy and Catherine Deasy).

Curtain nightly in Rossmore is at 8pm and booking is advisable through 086-4481086. The Saturday night’s performance is in aid the Friends of Jamie Wall Trust, the Kilbrittain and Cork GAA player whose mother, Sheila, plays the demanding lead role in It’s The Real McCoy. 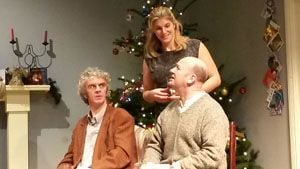 Meanwhile, there is one final performance of Skibbereen Theatre Society’s Christmas comedy production, Many Happy Returns by Bernard Farrell, at the Town Hall on Saturday night, January 3rd.

Directed by Hilda Hegarty, it got off to great start on Monday and the audience loved the show with its magnificent seasonal set also worthy of special mention. Tickets are available in advance from Thornhill Bros Electrical, Skibbereen, tel 028-22557, or at the venue from 7.30pm on Saturday.

The cast had great characterisation and put huge energy into their roles. The result was some fine acting, which brought out all the fun of the play.

The play is set on Christmas Eve in present day. Declan (Eugene McCarthy) and his wife Amanda (Breda Herlihy) are coming for a Christmas visit. In an effort to impress them Irene (Mary O’Driscoll) has planned a Christmas event, complete with flashing reindeer and snowmen. Her husband Arthur (Declan McCarthy) is a reluctant participant. The audience is highly entertained as they watch the plan descend into mayhem!

The antics of Irene’s dad Matty (Kevin Cadogan) and the return of her mother Gladys (Terri Kearney) in the midst of it all only add to the consternation. As there is only one performance left, advance booking is advisable.

This weekend also sees the pantomime season in Cork beginning to wind down after successful runs. Little Red Raving Mad (the original adult panto), presented by Chattyboo Productions is performed upstairs at An Spailpín Fánach, South Main Street, Cork, with shows on January 2nd and 3rd and again from the 6th to 10th, nightly at 8.30pm. As this show is aimed over 18s, ID may be asked for to gain admission.