TO say it’s been a topsy-turvy week for the vaccine rollout would be an exercise in grand understatement. We’ve had more plot twists than an episode of Line Of Duty.

We started the week with the government sounding cautiously optimistic notes about the acceleration of the rollout. There was a general sense that we were seeing a light at the end of the tunnel. A summer of outdoor frolics and Wibbly Wobbly Wonders was firmly in sight.

The government had stood firm on its decision that all the under-70s would receive their vaccines in order of reducing age, and though this wasn’t a perfect solution, it was at least a clear plan that the public could understand. But then George Lee appeared on the telly again, hovering ominously over a microphone like the Ghost of Christmas Past, bringing us all straight down to Earth with NPHET’s dire warning of a fourth wave were we to reopen the country too quickly. Bah humbug.

If all that wasn’t bad enough, NIAC subsequently advised that the AstraZeneca vaccine should only be administered to the over-60s, given the incidence of rare blood clots being reported internationally. This resulted in a flurry of cancelled appointments and some raised eyebrows as to whether this cohort was going to be used as guinea pigs for a second rate jab. Experts were wheeled out on the airwaves to reassure the public about the safety and efficacy of the vaccine but, let’s be honest, the public were all knackered at this stage. This was still only Monday, like.

The emotional rollercoaster was only beginning. The US media soon reported that the Johnson & Johnson vaccine was being paused there due to similar concerns over blood clotting issues.

This was to be Ireland’s ‘gamechanger’ single-dose vaccine. Despite official assurance to the contrary, it was starting to feel like the only way we’d ever get vaccinated was by pledging allegiance to The Queen.

At this stage, the country was on the verge of just going back to bed for rest of the week but the national mood shifted yet again when Ursula von der Leyen took to her lectern like the Ghost of Christmas Future, announcing a huge order of new Pfizer vaccines for the EU.

This meant an additional 545,000 doses for Ireland in the second quarter of the year. We were on the pig’s back again!

She then went on to reveal that Santa Claus had received his first dose and that himself and Rudolph were gearing up for a bumper Christmas.

Ok, I made the last bit up, but anything was possible at that stage. 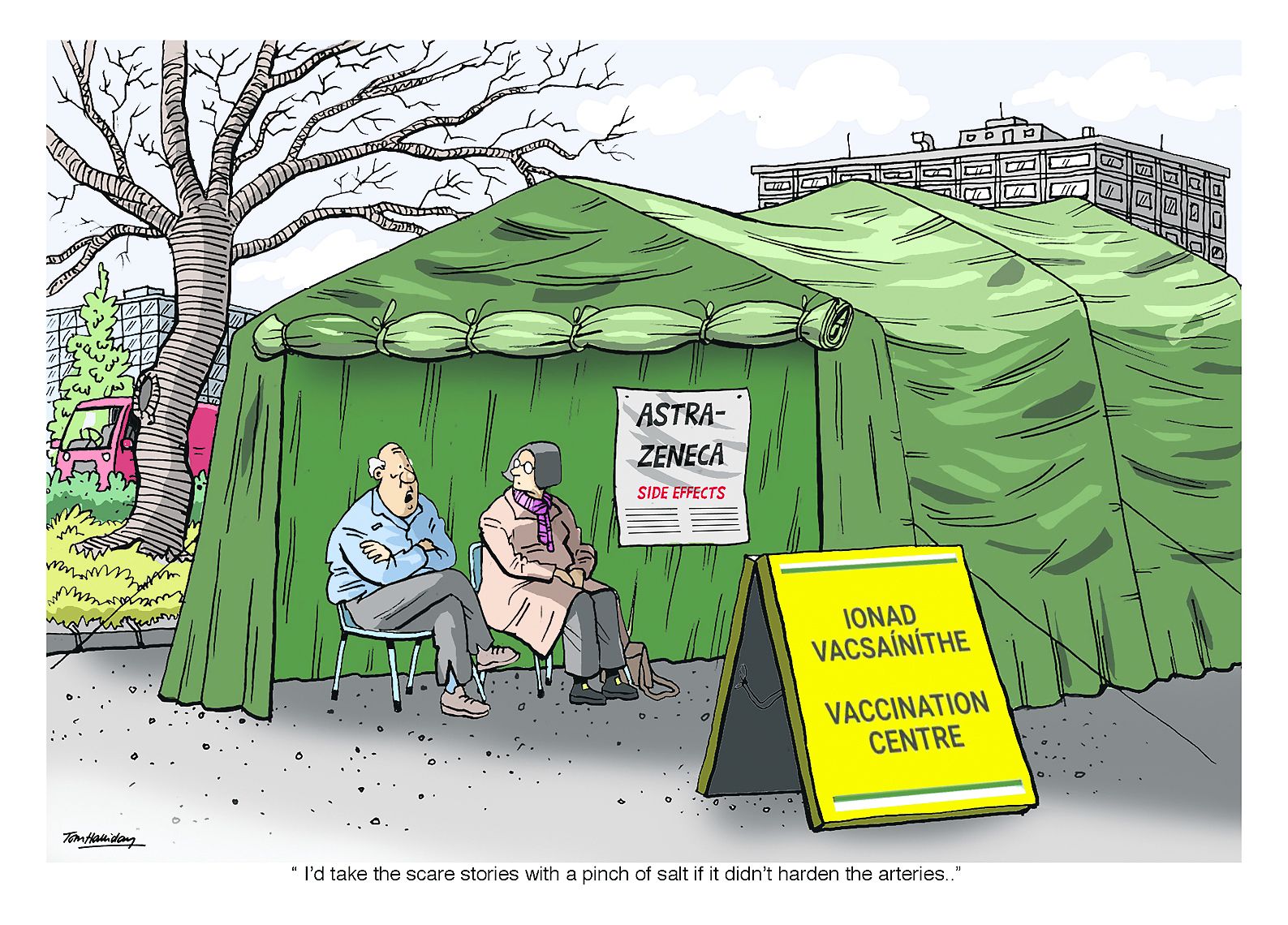 The positive feeling lasted well into the week with the opening of the online registration system which, touch wood, is doing what it’s supposed to be doing. Many of us are hearing anecdotally about family members and in-laws getting ‘the call’.

Freedom and some return to normalcy feel tantalisingly close. But this government, and in particular the Minister for Health, seem to just love a bit of drama.

Just as we were all settling down for a relaxing weekend, an exercise in Saturday morning kite-flying by Stephen Donnelly had all of us 30 to 50-year-olds choking on our Coco Pops as he floated that idea that the 18 to 30-year-olds might skip ahead of us in the vaccine queue.

There followed an intergenerational war on the airwaves the likes of which has not been seen since 1921 but which petered out again once the Minister performed another volte-face, explained that he was merely asking his department to examine the idea, and basically, rowed back quicker than the O’Donovan brothers up the River Ilen. The drama.

My main takeaway in all this is to take all these developments, this rolling hysteria, with a pinch of salt.

There will be more bumps and twists along the road no doubt, and reacting to every single one of them like it’s the end of the world will do none of us any good.

We need to keep our eye on the prize. For me, that’s August and a pint of stout in De Barra’s, Clonakilty. I hope to see you there.

I was disappointed to read this week that the word ‘culchie’ has been removed from Scrabble dictionary, due to it being considered offensive. Offensive to who, I wonder? I certainly don’t find it offensive. As a Cork exile in Dublin, we culchies wear our country credentials proudly. In the rare instance I see a tractor I’ll cheer at it from the side of the road. I’ll often shout ‘hup!’ on an overcrowded Dart, just to keep me grounded. Of course, I’m all for the Jackeens not being allowed to use it. We’ll take whatever advantage we can get, even in Scrabble.