AS Kermit the Frog famously sang ‘it isn’t easy being Green’.

And on the face of it, this looked like it was going to be a tough week for Eamon Ryan and his party.

With the announcement of the National Development Plan on Monday, it appeared Fianna Fáil and Fine Gael had held sway by including all the major road projects from their plan for government in 2018.

Climate change, how are ya?

What was really playing out amongst the coalition parties was symbolic of some of the political dividing lines that have emerged amongst the public in recent years over transport.

Twitter is often the battleground for these turf wars between cyclists, motorists and pedestrians, and it is here you’ll see the disputes rage on a daily basis. Cycling campaigners sharing videos of near misses in traffic. Motorists sharing videos of Lycra-clad auld lads cycling four abreast on a dual carriageway. Pedestrians getting doused in puddle water by passing buses. Why can’t we all just get along?

But these arguments are an indicator of some of the wider forces at play behind the new politics in the era of climate change.

I know where I sit on this spectrum. I have been cycling around the capital since I moved here at the turn of the century and, at this stage, can pretty much count out my life in stolen bikes.

They say that in Dublin City centre you are never more than five feet away from a bike you used to own.

Recently, my six-year-old son has joined the growing cycling brigade. Every morning, we take part in a Cycle Bus with a group of other parents and kids from my son’s school. Because there is a busy road near the school, and no option to cycle on a segregated path, we take over the road in a large group so the cars have to wait their turn. The concept is popular in Scandinavian countries, you won’t be surprised to hear.

I was glad to see this concept being adopted in a few towns in West Cork, too, probably even before Dublin, I suspect!

For the most part, we are treated with respect and the kids are given the space and time to enjoy a healthy morning cycle to school.

But there are a minority of head-the-balls who will dangerously overtake us, often roaring about how we’re going to cause an accident. We’ll inevitably catch up with them at the next set of traffic lights.

Of course, what we are doing is an inherently political act. There was a time when this city was designed around bikes and trams, and many of us would like a return to that balance – namely a healthier, safer, more environmentally conscious urban landscape. 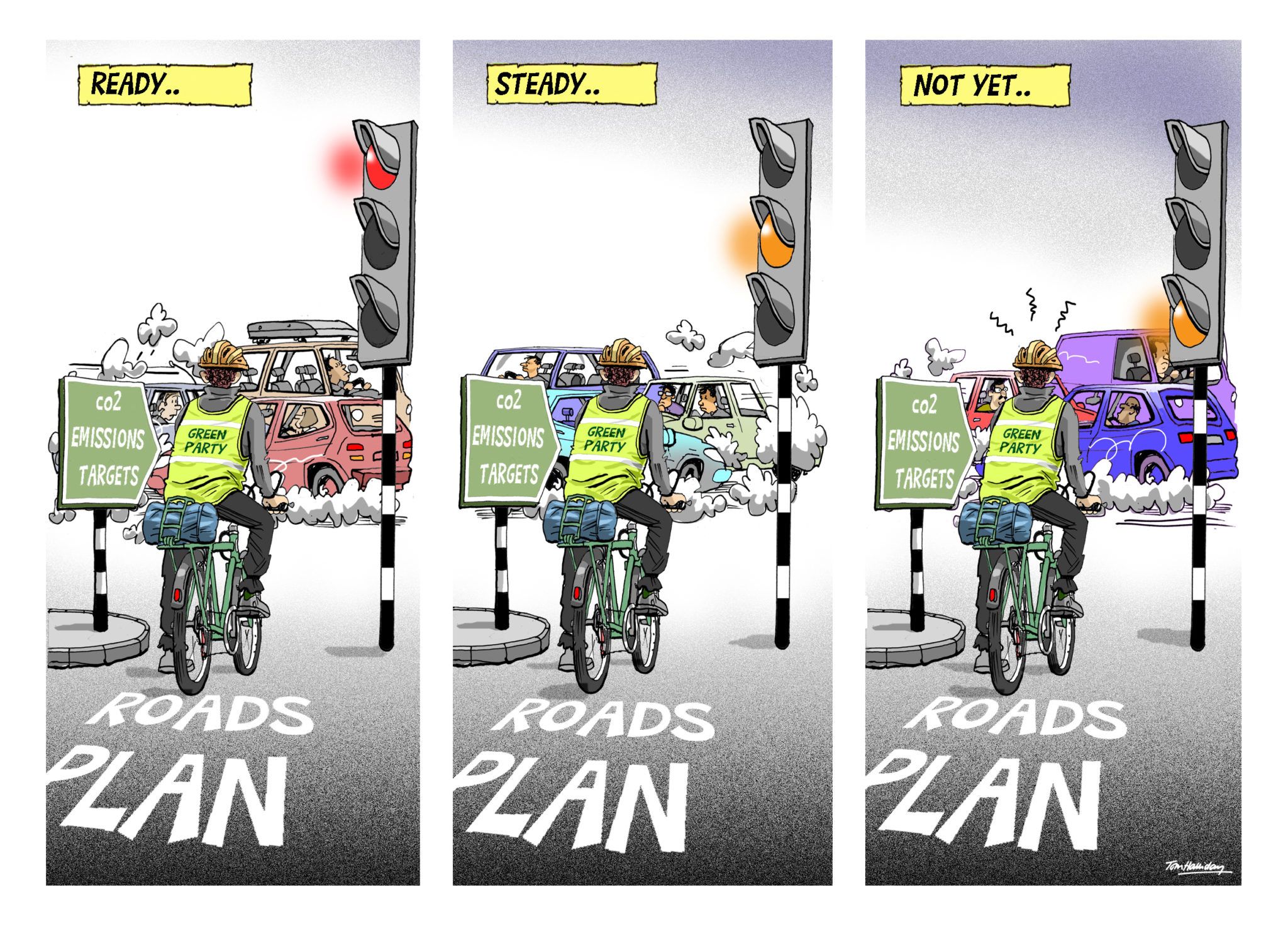 But these days, many parts of Dublin are still dominated by the motor car and are simply too dangerous to cycle through, hence our Cycle Bus.

Although there is a growing movement to improve cycling infrastructure backed in large part by the city councils, progress is slow, to say the least. This isn’t helped by rampant NIMBYism where serial objectors, usually in the poshest areas, do everything in their power to maintain the status quo.

The area where I live on the northside is ahead of the curve in this regard and we have the privilege of the wonderful Sutton to Clontarf cycleway with its sweeping views across Howth Head to the north, Bull Island to the east and Dublin Port to the south.

Here, the cycle paths are segregated and, bar the occasional Lance Armstrong-wannabe trying to set a new Olympic record, are extremely safe and even family-friendly. It is a beacon of better things to come.

Beyond Dublin, the rollout of cycling greenways across Ireland, and the imaginative restoration of old railway lines to provide wonderful new cycling amenities, is a wonderful thing to see and I hope to be seeing much more of this around West Cork.

But there needs to be a balance. With the electric fleet growing, it’s not like we can do away with plans for improved roads, especially in rural Ireland where car dependence is simply a fact of life.

In this regard, the National Development Plan tries to please all of the people, all of the time. On the surface, The Greens have been the big losers.

How can we be taking our climate responsibilities seriously if there are so many road projects listed in the plan?

The plans include the ‘Thomond Express’ M20 motorway from Cork to Limerick, the Galway City outer ring road, the A5 to Derry, the upgrade of the N4 from Mullingar to Longford and the N24 from Limerick to Waterford.

However, the devil is in the detail and The Greens may be playing the long game here.

There is a commitment to spending one-fifth of the €165bn on public transport projects and €300m per annum on cycling and pedestrian infrastructure.

And it has been acknowledged within government circles that the programme for government commitment to a two-to-one ratio favouring public transport over roads would likely scupper many of the plans for road upgrades.

Often, these grand plans are as much about the politics of today as they are about the realities of what can be delivered over the coming decades.

And this week The Green Party played a clever political game of balancing the two.