Our preoccupation with Black Friday may be new, but we’ve always had an interest in a good bargain

A TRAWL through the advertisements in The Southern Star to coincide with Black Friday reveals some slight differences to our sales expectations today.

Once an exclusively American event for bargain hunters to pick up a few sneaky early Christmas presents, Black Friday has spawned to become a global tech and fashion phenomenon.

Among the popular items this year are cordless vacuum cleaners, smartwatches, 85-inch ultra HD TVs, and video doorbells. For a fraction of their normal price, we can snap up highly coveted items that pamper to our obsession with brand names.

Black Friday once suffered from a rather negative image. Philadelphia police were the first to use the expression during the 1950s, to describe the chaos on the day after Thanksgiving when hordes of euphoric shoppers, flushed with cash (‘in the black’) flooded into the city, and shoplifters took advantage of the bedlam to make off with some seriously discounted goodies.

Since then, the day has morphed first into a four-day event, extending until Cyber Monday, and now, it seems, into a month-long spree, with incredible daily deals.

When it was introduced, Black Friday was special. But today’s world is full of sales. Shops kick off the year with their New Year Sales (often leftovers from the Christmas Sale), and continue with spring sales (early and late), summer sales – ditto, autumn sales – ditto, back-to-school sales, halloween sales, and close the year with Christmas sales.

Exactly when isn’t there a sale on?

Who would be daft enough to buy something that wasn’t discounted? The uniqueness of sales has disappeared.

In the past, sales seem to have been different beasts. They were held occasionally, and had a clear start and end date, generally from one to three weeks later, or when stocks ran out.

The discounts were not on luxuries but usually on basic items of clothing. Unlike today’s awesome ‘up to 70%’ savings, reductions were once much more modest, often a mere 10%, and never more than half.

The first mention of a sale in The Southern Star occurs on 8th October 1892 when Morrissey’s of Bandon gave readers the opportunity to ‘save a few pounds’ by buying boots, shoes and slippers ‘at a genuine reduction”.

On 7th October 1893, John J. O’Connell, 19 The Square, Skibbereen, publicised the opening of his ‘Great Annual Sale’ the following Saturday with the somewhat exorbitant claim: ‘Wonders will never cease’.

His prices were apparently 20% less than at any other clothes shop. Tweeds, for which you’d normally have to fork out 2 shillings and fourpence each, could be yours for a snip at 1 shilling and sixpence – complete with a two-year guarantee.

Customers were lured by clever advertising slogans such as ‘do not miss this opportunity’, ‘astounding bargains’, ‘immense reductions’, and ‘this is the real cheap sale’ with ‘sensational offers’ that cannot be repeated. ‘Don’t fail to see our windows’, advised the Drimoleague draper TJ Daly in 1949. ‘A visit will repay you.’

Adverts sometimes also referred to seconds, or goods that were ‘slightly soiled’.

The 1960s and 70s often witnessed sales specialising in furniture and fittings – wardrobes and convertible sofas, carpets and wallpaper. Suddenly, in the 1980s, electrical goods began muscling their way onto the salesfloor. Washing machines and dishwashers, fridges and freezers, jostled for space with VHS recorders, and newfangled 22-inch colour TVs.

Customers normally had to pay for sale items in cash. But at some outfits, such as John Atkins in Dunmanway, ‘loan facilities’ were available on more expensive goods. Weekly payments could also be made at Con Ronan’s electrical shops in Cullinagh and Dunmanway.

Yet, despite their differences, today’s Black Friday discounts and sales of times past have several features in common. They shared an effective advertising campaign that offered consumers highly desirable products, and informed them how easy it is to acquire them – traditionally in West Cork’s local stores, now with a single ‘click’. The thrill of bagging a bargain coupled with the nagging fear of missing out, are probably perennial. Not least, there’s the age-old hyping of merchandise. When O’Connell’s of Skibbereen proclaimed in 1893: ‘We have the greatest wonder of modern times’, it was referring not to a pet dog security camera with smart night vision, two-way audio and human motion sound detection but instead to a lovely warm, all-wool, Irish tweed coat. 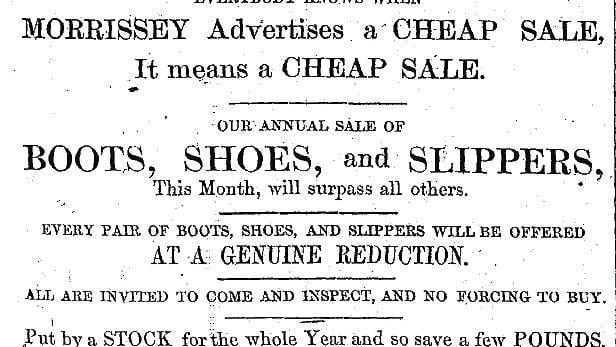 Boots, shoes and slippers feature among the items in West Cork’s first shop sale, recorded in The Southern Star in 1892.