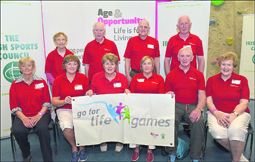 Members of the Go for Life team from Cork who competed in the Games recently.

A TEAM representing Cork took part in the Go for Life Games held in DCU recently, and picked up a ‘Spirit of the Games’ award.

Now in its fourth year, the Go for Life Games is one of the biggest social sports events for older people in Ireland.

Run by Age & Opportunity, with support from the Irish Sports Council, this year the Games brought together almost 300 older players, from Donegal to Wexford.

Bernie O’Shea, Mary Walsh and Maurice McCarthy from Clonakilty formed part of the ten-strong team, competing in the Games.

‘This was my third time taking part in the Games and the event improves every year,’ said Bernie. ‘The organisation and atmosphere were amazing. It’s a great social event. We didn’t worry about the scores – we just wanted to have fun ... and we did.’

The Cork team were delighted that teammate Ruth Hornfeck from Midleton won the ‘Spirit’ award but will endeavour to bring it to West Cork next year.

The Games began as a one-day event in 2012 and is now a year-round phenomenon, with groups training, practising and competing in leagues and friendlies across Ireland.

And this number is growing all of the time, as new counties come on board. The competing teams, apart from Cork, were from: Carlow, Cavan, Clare, Donegal, Dublin City, Dun Laoghaire/Rathdown, Fingal, Kilkenny, Laois, Limerick, Mayo, Meath, Offaly, Roscommon, South Dublin, Tipperary North, Tipperary South, Waterford, Westmeath and Wexford. It is hoped that, by 2016, there will be teams from every county in Ireland.

The games themselves are devised specifically for Go for Life. ‘Lobbers’ is a target game adapted from petanque and boules; ‘Scidils’ is a two-sided adaptation of ten pin bowling but using two skittles; ‘Flisk’ is adapting from boccia and horseshoe pitching. These games, with clear rules and scoring systems, can be played and practised by all, no matter what level of sporting ability. They are great for developing balance, flexibility and concentration. The social aspect of the Games also brings people together for fun social events with a healthy amount of competition to keep things interesting.

Mary Harkin, head of Sport and Physical Activity in Age & Opportunity, was delighted with the great response on the day: ‘We are always hearing in the media about older people not getting enough exercise. When you see the kind of energy and enthusiasm that the Games inspire, you can see that older people can continue – or even start – to live very healthy, active lives at any age.

Go for Life has been training older people at a local level for almost fifteen years to lead and encourage older people in their neighbourhoods and communities to take part in sport and physical activity. Programmes like Go for Life, by getting older people more active more often, can benefit everyone. Events like the Games are just a grand example of the kind of smaller activities that are happening in every county in Ireland.’

Go for Life is an Age & Opportunity initiative supported by the Irish Sports Council.