By Ailin Quinlan A COMMUNITY bike rental scheme - the first of its kind for a rural Irish town - is being planned for the West Cork town of Clonakilty. 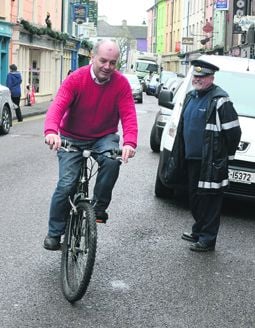 Traffic warden John O’Carroll keeping an eye on Tommy O’Donovan of O’Donovan’s Hotel, who is behind plans to set up of a bike rental scheme in the town.(Photo: Denis Boyle)

A COMMUNITY bike rental scheme – the first of its kind for a rural Irish town – is being planned for the West Cork town of Clonakilty.

Under a proposal by local hoteliers, mini bicycle-docking stations – each holding about 10 bikes – will be located in the grounds of hotels in Clonakilty and surrounding areas such as Inchydoney, Dunmore, Rosscarbery and Courtmacsherry.

In Clonakilty town, the docking stations and their bikes will be painted in the vibrant town colours of green and red.

This rural version of the popular urban bike rental initiatives currently in operation in cities such as Cork Dublin and Galway, and across Europe, is the first of its kind in the country, say the organisers. The docking stations and their overall complement of about 70 bikes will be available through the purchase of a special card, to local residents and to tourists visiting the area.

The colour-coded bikes will come with safety helmets, high visibility jackets and a map of suggested routes.

The initiative, which is estimated to cost in the region of about €50,000, is expected to be a huge boost to the area because it will allow tourists to travel to picturesque outlying areas under their own steam, says Clonakilty hotelier Tommy O’ Donovan, one of those spear-heading the scheme.

Each hotelier would maintain and manage their own docking station, he explained.

Organisers hope to secure some funding from Cork County Council, as well as from the network of grants run by the West Cork Development Partnership.

‘We have the Bus Eireann bus pulling up outside the door, and visitors getting off and saying they want to go on to Inchydoney or Timoleague – but there’s no bus to such places from Clonakilty,’ Mr O’ Donovan explained.

‘However, if we had a bicycle scheme, they could use that,’ he said, adding that the land around Clonakilty was relatively flat, and, as it was a coastal area there were beautiful views.

‘We’ve done our groundwork and there’s great interest in it,’ he said adding that the scheme would be open to all tourists and local residents.

Anybody interested in getting involved, either through direct participation or sponsorship, should contact Tommy at O’Donovan’s Hotel (023 8833250).