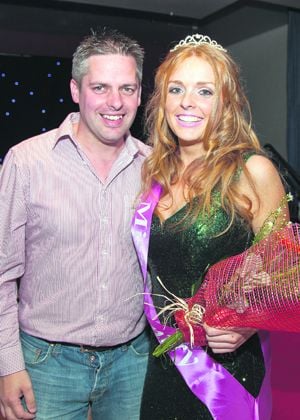 ‘IT has been an unreal week,’ said Cadhla O’Sullivan, who was crowned Miss Bantry on Saturday night; scored 490 in her Leaving Certificate results on Wednesday; got accepted for Social Science at UCC, and will be celebrating her 18th birthday on Saturday night.

Cadhla said her sister, Séadna, persuaded her to enter the Miss Bantry pageant, having enjoyed her own experience of the competition and her ultimate win in 2013.

‘I have to say I did enjoy it,’ admitted Cadhla.

‘It was an unforgettable experience because it is something you normally wouldn’t do. I would be quite confident but it is still a difficult thing to stand up on stage before a group of judges and a room full of people.

‘And I was still buzzing from the Leaving Cert, and now I have my birthday party to look forward to,’ she told The Southern Star.

Cadhla, who is from Gortagarry in Ballylickey, will be celebrating her birthday at The Quays, the bar and restaurant she represented in the competition, and she said she hopes all of her family and friends will come and have a great time.

Speaking as an avid GAA fan – having played on the winning team in the football county final in May – Cadhla said: ‘The county final and the Miss Bantry competition were two completely different events, but I enjoyed both of them equally.’

Both Caroline and Hannah attended Inchiclough National School together and have been friends for years, but they can also claim one further association – Caroline’s dad, Seamus, and Hannah’s mother, Santhé, are a couple.

Hannah also confirmed that Organico – the organic grocery store and restaurant in Bantry that both she and her mother work for – is now officially serving the best coffee in Ireland after McCabe’s Coffee won a gold star for their organic blends in The Great Taste Awards in England.