THOUGH it was first launched in 2007, the Peugeot 308 seems to have been on the motoring landscape for much longer.

The third generation looks set to keep the brand’s compact family interest going for another seven years or so, despite the onslaught of the crossover/SUV genre across the whole business.

There is still a place for a hatchback in that space. And for a wagon, and the latest 308 is now available in Ireland in both those formats. Literally just landed here last week, I’ve had a day or so with it, and it won’t let down the successful run the Lion brand has been having over recent years.

The car is the latest in the stable to be brought into the styling ethos which was inaugurated by its smaller sibling 208 and derivatives. With some even newer tweaks. So we have a new dark grille, and a new inspiration of the Peugeot logo. Along with those sabre-style vertical running lights that are very distinctively Peugeot. Taking the front look all together it comes across very tidily.

Which is the same epitaph we can give to the overall shape. The designers made a feature of the 308 not being aggressively shaped. The target markets, small family or older couple dropping back a size, are still relatively conservative. And Peugeot, now part of the large Stellantis Group, can comfortably leave the avant-garde to other brands in the company. 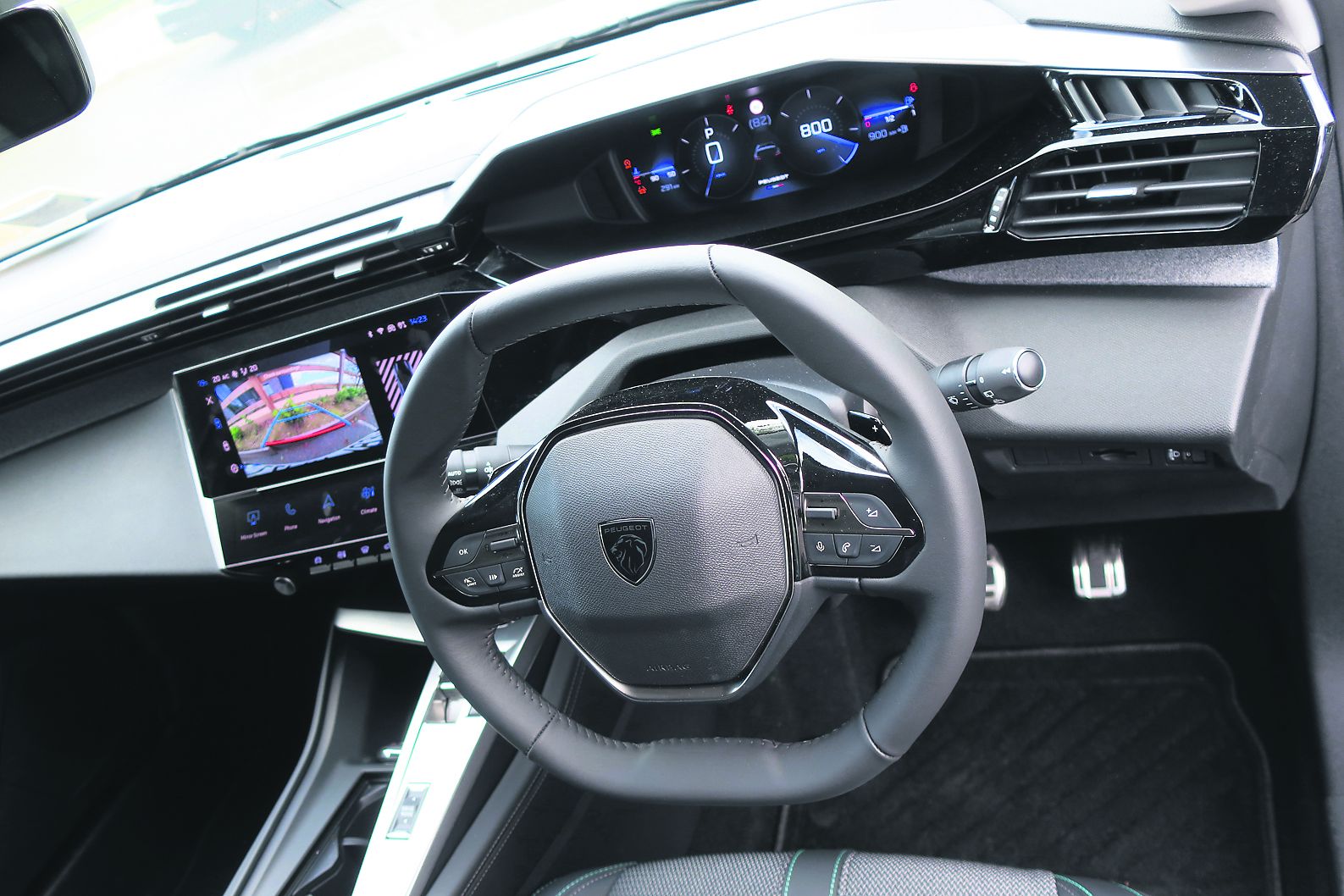 The new 308 is longer than its predecessor. Longer wheelbase too, which means there’s seriously decent room in the rear. And a good boot. But it’s lower to the ground, which makes for a very sleek profile even parked. There’s a more raked windscreen, so the door profile is not the easiest for tall people getting in. I’m sure I have tracks on my skull, not only from the 308 but from the three-quarters of all cars these days that I can’t get in or out of without my head rubbing.

Once in though, the car has all the space and comfort anyone might need. Certainly more than adequate for this lanky lad. It’s current Peugeot interior style and finish. In other words, good design and quality. My short-term review car was the middle Allure of three grades, so came with a good navigation system in a decent screen. Though if you didn’t go that far, the smartphone integration these days works a treat. The small steering wheel and high-set instruments are now a Peugeot standard.

There are three engine options — petrol, diesel, and PHEV in two power outputs. There will be an all-electric version towards the end of next year, in line with the policy of the Stellantis Group driving towards full electrification across its ranges. 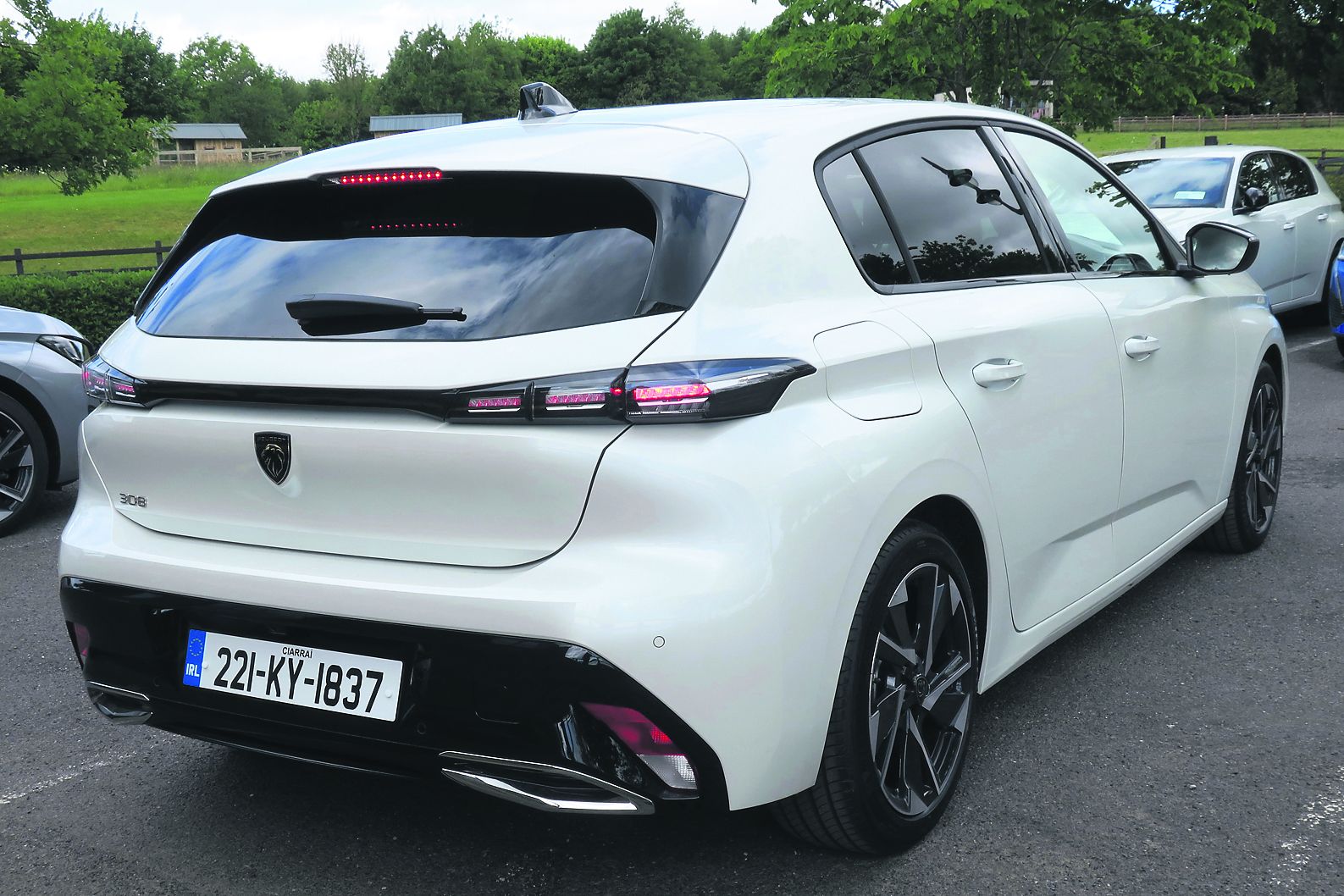 A colleague came up to me as I was sitting in the car waiting to drive off from Gowan House.

‘Isn’t it great to hear the sound of a diesel?’ he commented. Actually, at that point I hadn’t noticed that it was a diesel. Typically from Peugeot, it was quiet. Though the grumble from under the bonnet as I pushed away was indeed unmistakeable. Later, driving across the midlands, the overall quietness of the motor was good.

It was an automatic. Which I like anyhow. But here’s the interesting thing — the 308 is only available in automatic in right-hand drive markets. That’s not entirely surprising, the trend is definitely to automatic now in these islands, and carmakers now also have to make build decisions based on what is available. For instance, there’s a list of options on the brochure ... with a note at the top that due to shortages, none are actually available. But not having a manual means that the entry price is higher.

On a launch event you don’t have enough time to sense what a car will be like to live with, but I did get a decent feel for the new 308. Enough to figure that I’ll have a good time in the next one when I get it for an extended period. I moved off-piste from the motorways into the country roads as well, and the comfort that’s a Peugeot tradition showed itself to be alive and well. Along with suspension able to take the rough and the smooth with equal aplomb.