THE Fiat 500 was the top selling city car in Europe in 2021 and in the top 10 of all model sales last year. This year it has climbed to fourth place in that latter league. Due to marketing difficulties over recent years in Ireland it hasn’t really registered at all, not even in the Top 100 space. But that’s a situation already showing improvement now that the brand has been brought under the wing of the Gowan Group’s motor division. A modern revival of the iconic tiny car produced from 1957 to 1975, the new 500 model launched in 2007 and has since been revised and continues to be sold markets with conventional powertrains, including a hybrid. The 500e under review is brand new from 2020, coming only with electric power. I always enjoyed the 500 in its previous iterations. But I quickly fell in love with the 500e.

Fiat has form in electric 500s, with a low-range electric version of the earlier car in California for a few years from 2013. This 500e, though, is designed from the beginning as an EV. It is wider, longer and has a longer wheelbase, but remains well inside the 4-metre length for its segment. 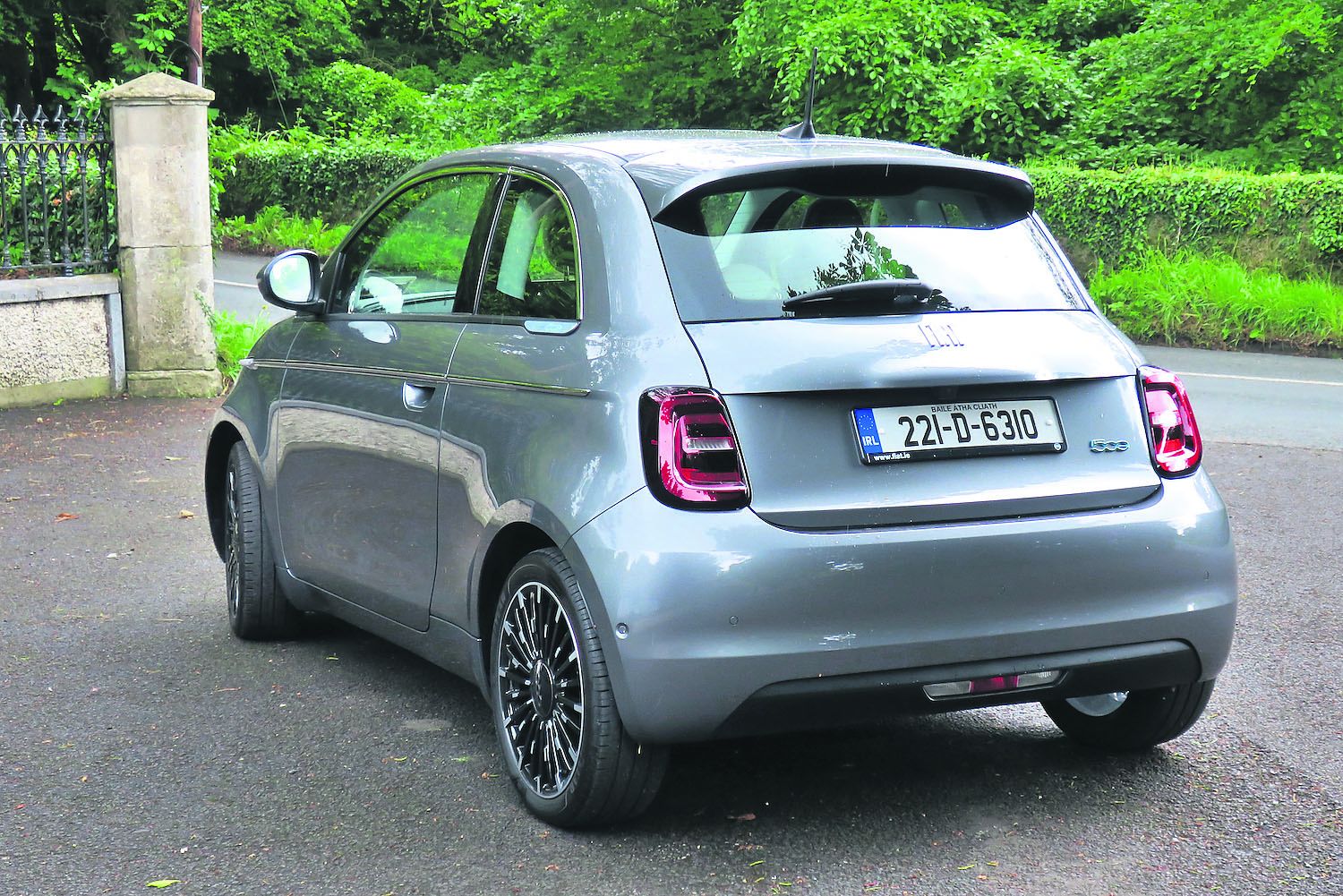 Visually it can’t be mistaken for anything but a descendent of the original 500 and its more recent modern interpretation. It’s also unmistakably modern. A mix of headlights that have a hawkish look on either end of a distinctive and deliberate ‘500’ badging where a radiator grille used to be. A touch of a ‘smile’ in the shape below the numberplate. The back is a nice clean hatch with integrated roof height spoiler and soft rounded bumper contours. All in all, a sweet style package.

That goes for the inside too, which is thoroughly modern Millie in feel. Smart but simple lines and finish to the dash, a wide high mounted touchscreen that proved reasonably non-distracting to navigate. Kudos for the fact that the smartphone mirroring is via Bluetooth, so no need to plug the phone in — it can be left on a neat space under the centre screen, where it will also be kept charged if it has that facility. The main instrument cluster is a good mix of stylish design and clear presentation of the essential driving information. Full marks for the straightforward heating and ventilation controls, and also for the comprehensive but easily understood controls on the steering wheel. The management of the transmission is also a line of buttons on the mid dash, which I liked. 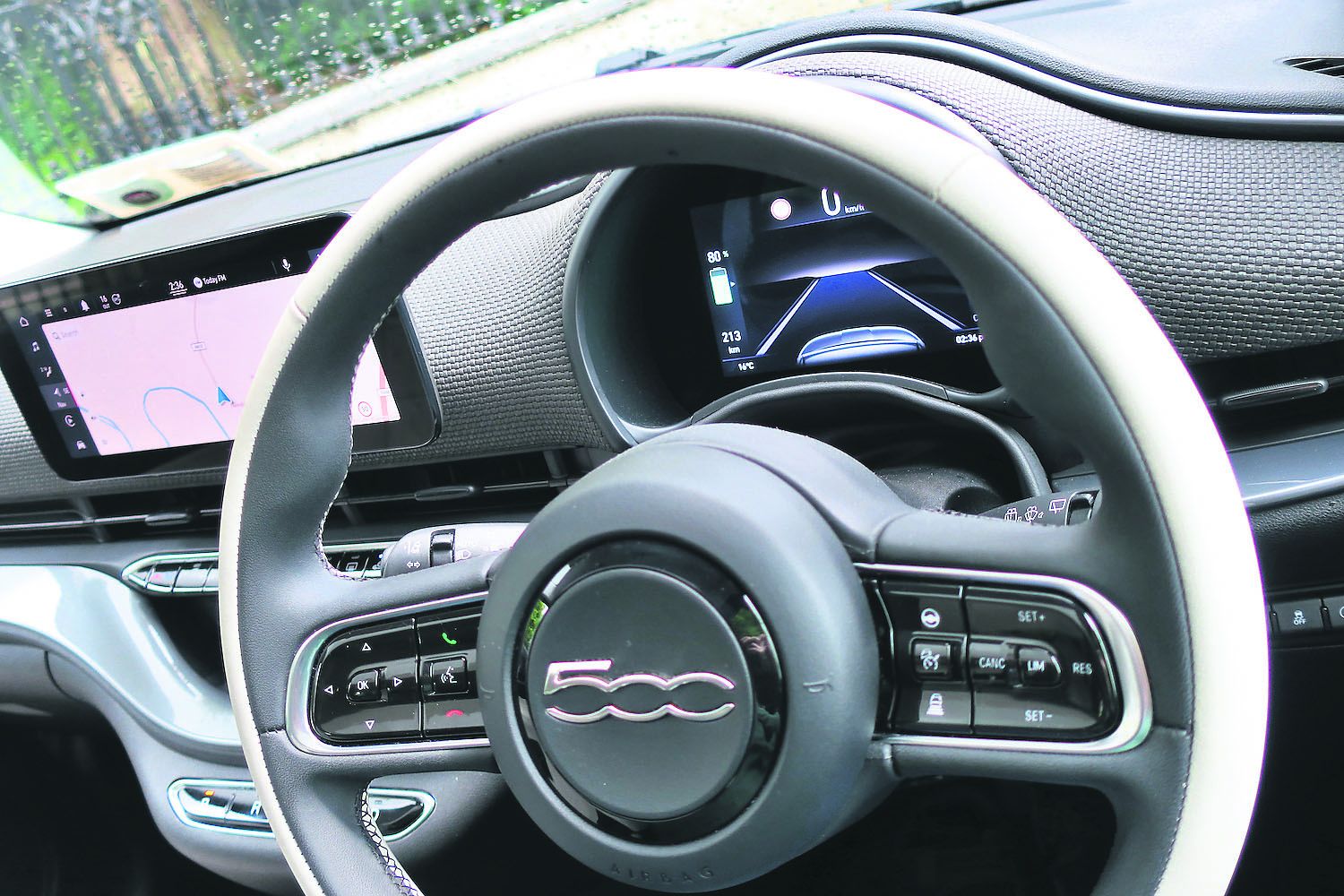 I didn’t feel at all cramped in the car — which probably would not be the case for anyone of stature in the rear, but I was never going to go there. Perhaps the extra width makes just that bit of difference. The door opener from inside is a funky electric press button, but there’s also a manual one lower in the door, presumably in case of electric failure?

The boot is small, but this is a small car. Flipping the seat-backs down gives more luggage space, though not flat.

The 500e comes with a choice of 24kWh or 42kWh batteries, the smaller one on the entry version which also has less horsepower. Since there’s only €2,000 in the difference, which also gives some higher spec, I can’t see any reason why someone would opt for the lower range 190km WLTP battery. The larger one, which was in my review car, claims 320km WLTP range. The car is equipped with a fast-charging capability, and there’s a good regeneration in the ‘one-pedal’ mode that I found perfect for all but motorway driving.

My experience was that if you do mostly motorway driving, and limit speed to something less that the maximum, the 500e 42kWh would probably run 260km before needing to be juiced up. But in normal runaround the towns and villages where I live, or indeed if you live and drive mostly in city and suburbs, that could probably stretch to 360km or even a little more.

The driving experience is typically EV nippy, and felt even more so because of the small size of the car. It was fun to drive. The kind of car that you smile when you get in and you’re still smiling when you get out. It would be easy to establish a long-term relationship with it for anyone with a compatible lifestyle. Kind of like falling in love, and then happy to make it work, right?