IT was a classic traffic lights derby scenario. Vehicles either side of me, waiting for the green. One a powerful Merc, the other something else. Me in the new Audi flagship, the e-tron GT. The road ahead completely clear.

Green. And I pushed it. The 476hp of the Audi hauled me off the line in an amazingly fussless manner, the artificial sporty sound growling just a little louder. It seemed that almost instantly I had reached the 60km/h limit. Well, with a rated 4.1s 0-100km/h and the immediate full torque of the Audi’s electric powertrain it might as well have been instant.

I think the drivers of the other two vehicles were convinced that their cars had somehow stalled.

That would not be my normal kind of driving. But the first drive in the e-tron GT was not your normal kind of car. Just once, and safely, I wanted to see what it is made of. Answer: power, performance, and ultra premium. And eminently ready for the Grand Tour if and when we get to be able to do that kind of long drive again.

With the e-tron GT, Audi has laid down a marker to the other very high-end electric cars on the market and coming to it. Very much in their sights are the pioneering Tesla S, the Porsche Taycan, and Volvo’s Polestar. Rarified spaces in any case, and more so on the electric cars grid. 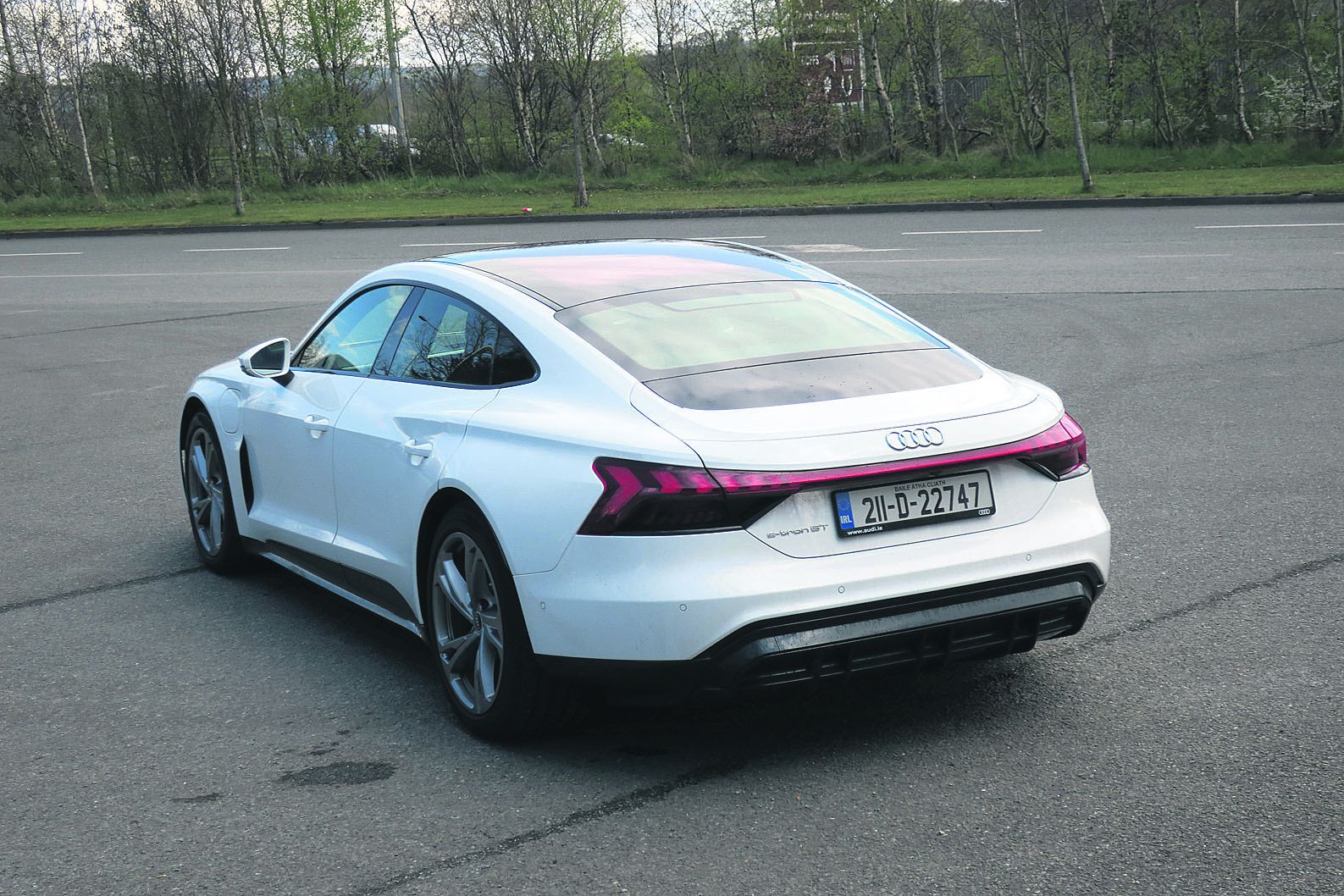 The looks alone leave most of the others standing at that traffic lights line. Audi has developed into premium with a capital P a long time since, and they haven’t deviated from that with this one. As they shouldn’t, because the price tag deserves capitals too.

It’s a big car, more than it looks from outside. It’s wide, low, and sleek. Four doors indicates it is meant for a full passenger load. And if the coupé roofline might suggest a headroom squeeze for those in the back, there isn’t, thanks to some clever underfloor battery packs design, leaving footwell room.

The inside is classic top-end Audi, a mix of digital and electronic analogue instrumentation, seriously prestige style and trim finish, and a sense of being cocooned in a special car when doing that long drive.

It’ll go the distance too, an 84kWh battery providing in the region of 480km range. If you need to go further, a five-minute charge will get you an extra 100km, or give yourself a 22-minute relaxing coffee to get an 80pc re-boost, both at suitable high-capacity charge points. There’s an RS version with 598hp and a 3.3s sprint capability. Same battery, very similar range. 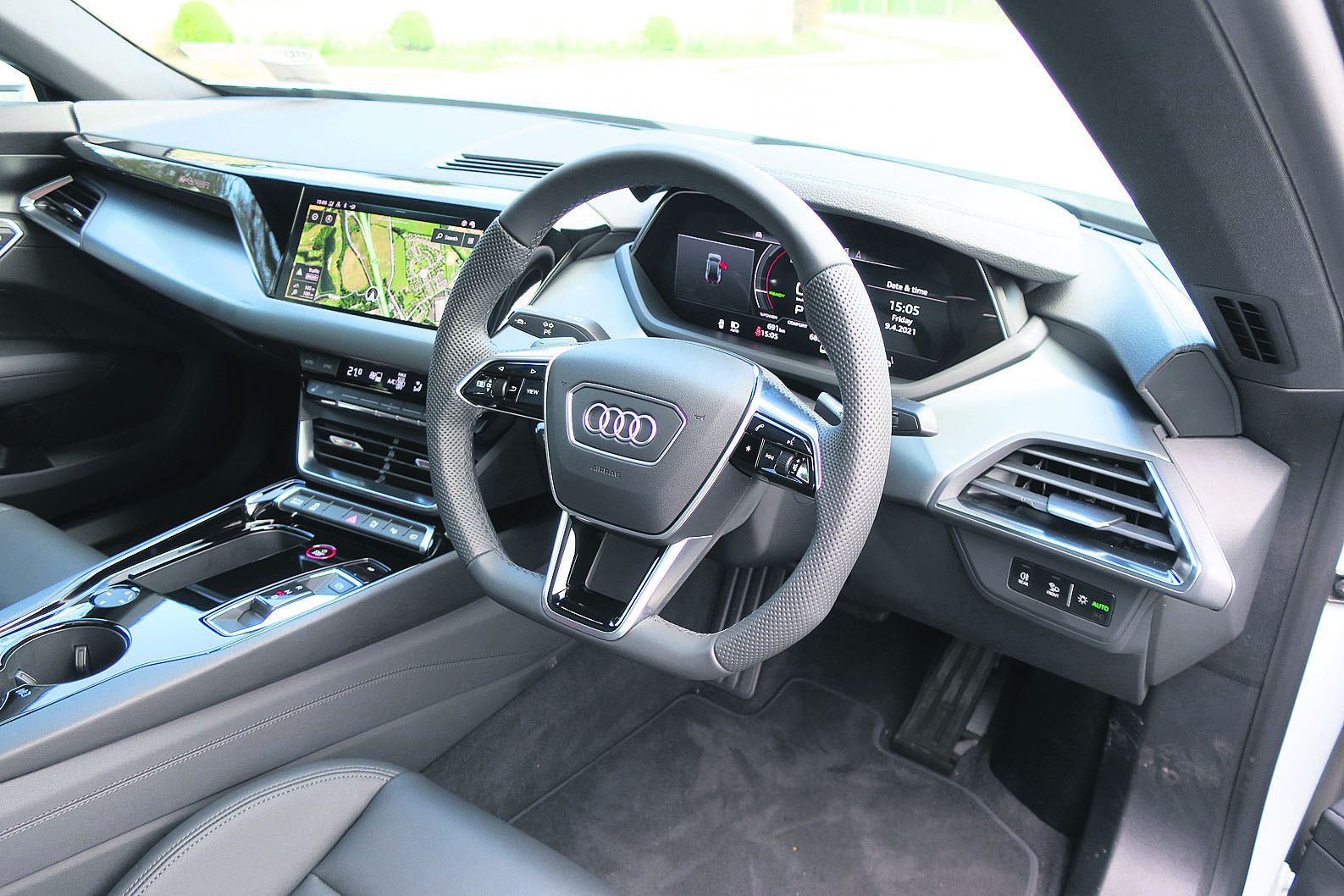 Electric cars don’t come with the sporty sound of a high-powered petrol engine. A rising whine is as much as you usually expect. But in the e-tron GT they’ve introduced a system that gives those outside and inside a sense of powerful engines. It’s artificial, of course. In a way like those background crowd noises which have been introduced to big football games on TV in the absence of spectators. When acceleration calls for it, it growls louder.

In true Quattro tradition the e-tron GT is an AWD car, electric motors on each axle providing power wherever it is needed. The rear transmission has a two-speed setup which under severe acceleration provides an extra launch oomph. Drive can be split in infinite ratio between front and rear.

The e-tron GT is targeting the top end of premium electric cars. Audi Ireland’s marketing director, Richard Molloy, says there has been a very strong interest in the car, with a number of customers already having put down deposits. Delivery of the first cars will be in July, and Molloy says supply will be ‘tight’, and Audi Ireland are already negotiating for additional vehicles beyond their initial allocation