Nathaniel and Fergus Ogden, with their sister, Flora, setting out from Castletownshend on the final leg of their 1,500-mile journey. 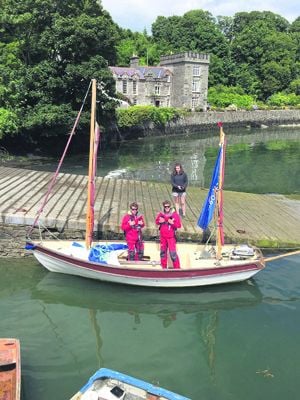 Nathaniel and Fergus Ogden, with their sister, Flora, setting out from Castletownshend on the final leg of their 1,500-mile journey.

AFTER 27 days sailing, some of it spent sleeping at night on their 18ft Drascombe Lugger, two brothers finished their 1,500 mile circumnavigation of Ireland in Baltimore last week.

Baltimore RNLI coxswain, Kieran Cotter, was the first to greet Nathaniel Ogden (23) and his brother, Fergus (16), when they landed at 6pm on Wednesday, July 29th after successfully completing their incredible journey.

Nathaniel, who is on a gap year before returning to Trinity to do a Masters in Digital Media, and Fergus, who is on summer holidays from King’s Hospital secondary school in Dublin, decided to set themselves this challenge for a variety of reasons.

The brothers, who learned to sail in Blessington in Co Wicklow, but spent all of their summers in Baltimore, have been sailing the Lugger all of their lives.

It was when they heard that a Lugger had never completed a circumnavigation around Ireland that they decided to make their boat, the ‘Lughnasa’, the Irish word for August, the standard bearer.

The brothers were also inspired to make the trip a fundraiser for the RNLI, especially after local lifeboat crews saved the lives of two people who capsized in a Drascombe Lugger in August 2014.

All along the route, which started in Baltimore on Saturday, June 6th, they received help and support from local lifeboat stations, as well as friends and family.

‘Quite of few of our friends and family thought we were mad because it was such a big undertaking in such a small boat,’ said Nathaniel, ‘especially as it is an open deck and provides no shelter from the elements.

‘Our dad, Warren, never tried to talk us out of it, but our mother, Jennifer, did worry a bit in anticipation. But once we set off she relaxed because she knew we were in constant contact with the 40 lifeboat stations all around the coast.

‘We didn’t go to all of them, but the ones we did visit made us very welcome. They gave us food and hot drinks, sometimes a place to cook, and a place to dry our clothes.

‘It was a stormy summer: Met Eireann said it has been the windiest summer in 41 years so that will give you an idea of the conditions we had to contend with. Five times we were delayed by nasty, windy weather.

‘There were a few hairy situations. Off Galway, we had Force 6 winds and the waves were up to 30ft high, which is quite high when it is only an 18ft boat.

‘We had waves breaking over the entire length of the boat: We were tossed around quite a bit by the sea and had to work hard to bale the water out because we were taking in so much.’

The Lughnasa has been in the Ogden family for 20 years and there is no sign of it retiring. Nathaniel said: ‘Despite its journey, it is in perfect condition.

This is the biggest journey she’ll ever make. But for us, it is just the beginning.’

Having set a fundraising target of €5,000, Nathaniel and Fergus say they are halfway there, but they still have a number of fundraising events to complete before the end of the summer.

Anyone who would like to make a donation can go to their Facebook page: circumnavigatingireland, or check out the online donation page: www.justgiving.com/Nathaniel-Ogden.