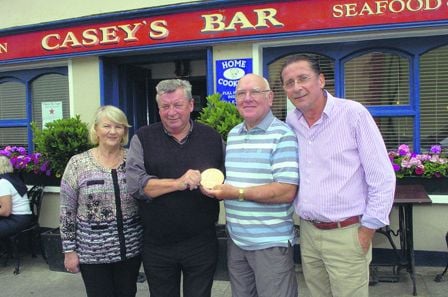 A BRITISH army memorial plaque, which was believed lost, was finally reunted with the family of its owner in Skibbereen recently.

A ‘Widows Penny’, so named because the plaque was given to a soldier’s next of kin, and a medal awarded to Skibbereen native Private Patrick Collins was recovered and returned to his grandnephew, Frank Fahy, former Mayor of Skibbereen, last June 6th after a chain of events sparked by the publication of Collins’ inquest in The Southern Star in August 2014.

The plaque was found in between shelving in Casey’s Bar in Union Hall by Paul Heaphy after an 11-month search.

Frank Fahy, who was Mayor of Skibbereen from 2011-2012, began the search after being contacted by Brian and Anna Crowley of Coronea.

Anna Crowley was originally contacted by the former proprietor of Casey’s Bar, Michael Casey, who had the plaque and medal in his possession for many years. Anna’s mother’s maiden name was Collins, and she lived on Mardyke Street like Patrick Collins. However, she was no relation.

After seeing the inquest in The Southern Star, Mrs Crowley recalled that there was another Collins family on Mardyke Street – the parents of the WWI veteran, Patrick Collins, so she contacted Frank Fahy.

Unfortunately, the plaque and medal had been lost when Michael Casey and his wife Martha retired from Casey’s Bar. When Mr Fahy received the news that it had finally been found, he travelled to Union Hall where he was presented with the four-and-a-half inch bronze memorial plaque and medal, just eight weeks shy of the late soldier’s 99th anniversary on August 12th.

He was believed to have died accidentally after losing his footing and falling over a cliff while on patrol with a fatigues platoon on the island. The fall could have been a consequence of the injuries sustained by Private Collins while on duty with the Royal Irish Regiment in France, which left him unsteady on his feet, according to the sergeant in charge of the subsequent inquest. The family of Patrick Collins had not seen the plaque for over 60 years and Frank Fahy now hopes to be able to relocate a victory medal which was awarded to Collins, as well as a plaque and medals that were awarded to his brother, William Collins.