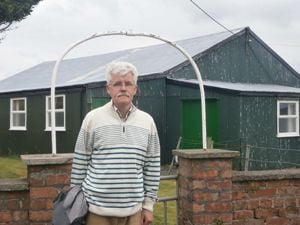 JERRY Aherne, a retired Cork city firefighter, is leading this project to remember those who made the ultimate sacrifice in the Great War of 1914-18, many of whom lie buried on foreign shores. A number of monuments serve to remember them, however Jerry wanted a more personal memorial, marking each and every man, and decided to plant 5,000 trees as a living memorial with a tree for each man who lost his life. Each tree will have a small plaque, naming the man for whom it honours.

Jerry came up with the idea to honour the fallen in the form of a living memorial of trees, following the setting up of the Kinsale Garden of Remembrance, which honours the 343 New York firefighters who were killed on 9/11. Kinsale woman, Kathleen Murphy was working as a nurse in Lennox Hill Hospital, in New York during the attack on the World Trade Centre, and wanted to find a way to honour the firemen who were killed on that day. As a result she created a garden of remembrance on her lands at Ringfinnan, Kinsale, planting a tree for every fireman that died, including their chaplain Father Michael Judge who was a friend of hers. Since its establishment, many relatives of those killed regularly come to visit the site at Kinsale.

Over the years, together with an archivist, Jerry has researched all the names of those from Cork who were killed during WWI. He looked at a few possible sites for the memorial around Cork county, but following an invitation to visit Bere Island he felt that would be the ideal place, particularly as the island has a long military history and was once a major WWI base. Following the decision to locate the memorial on the island, Bere Island Projects Group then came on board to assist Jerry in realising his dream.

In 1898 the British military raised a compulsory purchase order on the eastern end of Bere Island, West Cork, in order to construct fortifications, which would protect the British fleet while it was at anchor in Berehaven harbour. Tenants were cleared from the lands and seven gun batteries were constructed along with barracks, a hospital, camp church, coastguard station and housing. The main purpose of the fortifications on the island were to defend the fleet at anchor in the harbour while routine maintenance was carried out, however during WWI Bere Island was also used as a training ground for soldiers before they were sent to France.

The site picked on the island for the garden of remembrance is on Ardagh Hill, on whose summit is a Napoleonic Martello Tower. A group of forestry consultants are also assisting with the project, and it is hoped that planting will start in the spring of 2016 to allow the trees to become established before the official dedication in 2018. Jerry explained that at the centre of the memorial will be an oak tree, which has great significance in Irish mythology, other trees that will be planted include birch and whitebeam. Trees will be planted approximately 15 feet apart, to allow those visiting the memorial to walk freely amongst them.

Jerry is also hoping to get local schools involved in the project, particularly at the planting stages. Once completed, it is also planned to erect some form of interpretative monument on the island listing the names of all those who died in the war with individual plaques be placed at each tree.

On Saturday July 25th, Jerry outlined his plans for the project at a talk held in the former camp church on Bere Island and listed individual histories of the many young men who were killed during the war. Adjacent to the camp church on Bere Island is a building, which was once the military hospital, where many of those wounded on the battlefield were sent to recuperate before being redeployed.

Assisting Jerry in the project is Tom Burnell, who is undertaking the research to identify each and every Cork man killed in the Great War.

Once completed Jerry feels the memorial will serve to ‘bring them home in spirit. Even though they lie under foreign soil near where they fell, we will awaken their memory in the form of a living, beautiful tree for each of them on an island in West Cork.’