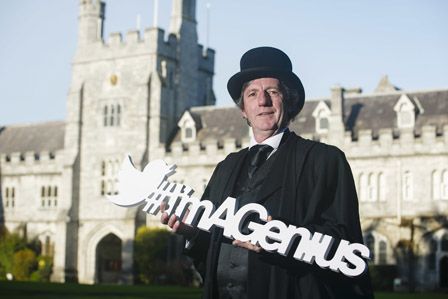 GENIUS Professor George Boole at University College Cork (UCC) as he prepares to attend the BT Young Scientist and Technology Exhibition 2015 in Dublin this weekend.

There, he will interact with the crowds and marvel at the fantastic projects, some of which have been influenced and informed by his groundbreaking work. Attendees can enter to win prizes by taking a selfie with Boole and then sharing the picture with the hashtag(s) #ImAGenius #GB200.

UCC will spend 2015 celebrating the bicentenary of Boole’s birth in 1815. Born in Lincoln, George Boole was the first Professor of Mathematics (1849-64) at UCC.

His work laid the foundations of the information age. His pivotal advances in mathematics, logic and probability provided the essential groundwork for modern mathematics, microelectronic engineering and computer science.

His influence is such that he has been called the father of the digital age. UCC has planned a series of major events during the year to celebrate his 200th birthday.