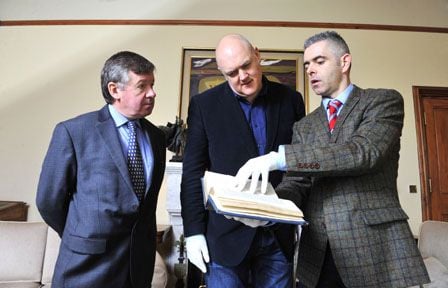 The comedian, who is currently performing his hit new show ‘Crowd Tickler’ in the Cork Opera House, accepted an invitation from UCC President Dr Michael Murphy to share UCC’s celebration of the legacy of George Boole.

November 2nd, 2015 marks the 200th anniversary of the birth of George Boole (GeorgeBoole.com), the first Professor of Mathematics at UCC whose influence on mathematics, logic and probability is such that he has been called the father of the digital age.

Beyond reaching millions of people all over the world through humour, Ó Briain has achieved the same feat on behalf of science and mathematics. His unique ability to engage with young people in making the topics interesting and fun has been shown again and again in Dara Ó Briain’s Science Club and Dara Ó Briain: School of Hard Sums, amongst others. He studied mathematics and theoretical physics at university.

After signing the UCC Visitors’ Book, Ó Briain viewed George Boole's own copy of The Laws of Thought. While a Professor in Cork, Boole wrote The Laws of Thought, which centred on his famous theory of logic and probabilities and has heavily influenced our present day lives as it contains the mathematics for today's computer systems.

Ó Briain enjoyed lunch and a discussion with the President and invited guests. He later viewed the Boole Papers, which are held in UCC Library. Over the next 12 months, UCC will celebrate Boole’s bicentenary year with a series of local, national and international events, conferences and exhibitions in conjunction with legacy initiatives such as the establishment of the UCC George Boole Institute. See more at GeorgeBoole.com or @GeorgeBoole200