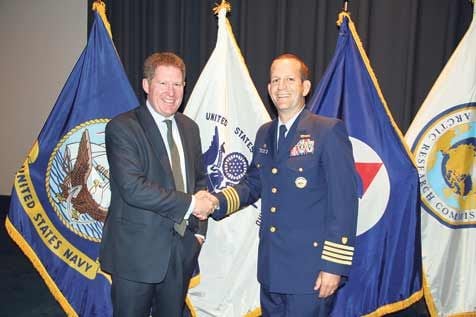 THE talk ‘RMS Lusitania and safety of life at sea’ by Michael T Kingston from Goleen will be attended by Martin McAviney, the vice-president of the GAA; Brendie Brien, the secretary of the GAA Provincial Council of Britain and senior CityJet, ESB and Lloyd’s of London executives.

The talk, which takes place on Tuesday July 28th, at 8pm in the West Cork Hotel in Skibbereen, is in aid of Bantry Hospital.

As well as explaining the factual circumstances surrounding the Lusitania’s sinking, Michael T, a maritime laywer who works closely with Lloyd’s, will describe the importance of the great liners of the era to Ireland.

‘The Lusitania is a story about the shattering of hope for Irish emigrants. She was a ship that gave Ireland’s population hope – the possibility of safety,’ Michael notes. In referring to emigration and hope, the lawyer will note the work of those who have supported the Irish abroad in the last number of years, such as the GAA and the ESB.

He said they had demonstrated in the UK and elsewhere that they care about the Irish community wherever they are. Michael has worked closely with the ESB in the UK and he is a member of Tir Chonaill Gaels GAA Club in Greenford, London.

CityJet executives will also be present as they have just launched their new Cork to London City route and Michael T has been assisting them, as he is heavily involved in British-Irish business development for both countries.

As part of a raffle on the night, City Jet will be providing two return tickets to London. Lloyd’s Irish representative Eamonn Egan will bring Lloyd’s famous Loss Book, which records the loss of the Lusitania.

Michael T has just returned from the US where he has been working on Safety of life at Sea in the Polar Regions with the US government, where he was presented with the Challenge Coin medal by the US Coastguard.

‘When Captain Mauger gave me the Challenge Coin I thought of my father and all those who he died with in Bantry Bay in 1979 in that terrible and unnecessary tragedy,’ said Michael T. ‘I thought, too, of the terrible loss of so many innocent passengers on the Lusitania, and also of course of the O’Connor and Ryan-Davis families at this sad time. It was fitting we were at the US Naval Memorial Centre and I was glad to be able to dedicate my talk there to the victims of the Berkeley tragedy and those who were injured.’ Michael has now been asked to give the Lusitania talk to the US Coastguard at their Marine Safety Centre in Washington later in the year.