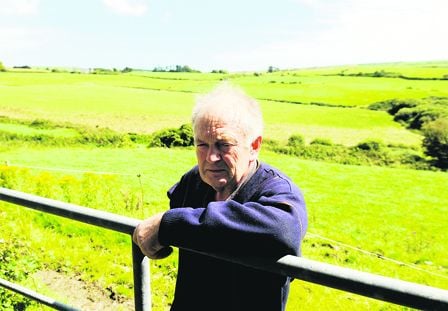 IT was back in 1993 that Jerry O’Sullivan returned home to Dunscullib, Leap, to take over the running of the family dairy farm.

‘This, farming, was always something I was going to do, I never really saw myself making a life anywhere else or doing anything other than farming,’ Jerry said. Jerry’s family have been here on this land for four generations and now Jerry and his family farm over 70 acres with 48 cows.

‘Farming here is not with out its difficulties, but it is very rewarding at the same time. With the abolition of quotas, I think that there are great opportunities for the farming community for the future,’ Jerry continued.

And it is with this future in mind that Jerry has expanded his operation by 25 percent: ‘I am confident for the future. We always try to be as efficient as possible, but I think now we all have to ensure that we are working to produce the best quality milk at all times. West Cork produces some of the best milk in Ireland and I think that this very important for the future of the industry,’ Jerry said.

Better and better milk quality is a target that Jerry has set for his herd and his business for the years ahead. Indeed, with the Drinagh Milk Quality Award for 2014 already achieved, Jerry has his eyes set firmly on ensuring that the milk from his farm is top quality. ‘You always want to see better protein yields and this is something we take very seriously around here,’ Jerry continued.

While the awards are a welcome bonus, Jerry feels that more could be done when it comes to the day-to-day administration of his business: ‘I find Teagasc very helpful and we have meeting once a month with them. The paperwork side of things has improved a lot with the advent of the internet and being able to complete form online, but with a very unreliable broadband service and no immediate plans to improve the availability, it can get very frustrating when you are trying to complete forms or even do some research.

‘The availability of reliable broadband is vital to ensure that rural Ireland and the farming community will grow and prosper into the future,’ Jerry said.

Even though Jerry has expanded his operation, he has not employed outside help with the day to day running of the farm: ‘We get help in for holidays and the likes, but I have expanded to a level that I can continue to operate on my own. I think this is important, not to expand too much and take on more than you can effectively handle,’ Jerry said.

Although Jerry has help when he needs it from his two teenage sons, ‘they are young still and, while I would like to see at least one of them take on the business, I’m not going to push them into farming. If they decide that they want to get involved, great, but they have to live their own lives as well,’ Jerry said.

However, for Jerry farming is part of his life and he wouldn’t have it other way: ‘I like the way farming allows you to be your own boss while living and working in the community that is important to you. I get a great sense of satisfaction from working on the land, I believe that farming has a bright future and I would recommend this life and career to anyone.

‘Like anything, if you work hard at it and do your best, then you can’t go wrong. But it is important to remember and spend quality time with your family as well. Sometimes that’s the most difficult balance to get right,’ Jerry concluded.