Sheba, right, has returned from Greece but forged strong links there 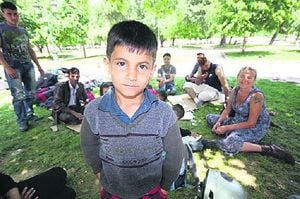 Sheba, right, has returned from Greece but forged strong links there

A WEST Cork woman is trying to make a difference in the lives of refugees in Greece.

Sheba Gray, who is originally from the UK, but is now living in Bantry, spent her Erasmus year from University College Cork in Greece.

‘As a student of philosophy and English, Greece was an obvious choice,’ said Sheba, who arrived in Thessaloniki in September 2014 and stayed until July 2015, during the course of which she helped to establish a feeding programme for desperate refugees.

‘My first contact with these displaced people was in the city park. It was evident to me that their basic needs were not being met, and that hunger was their primary concern.

‘I didn’t go to Greece with the intention of becoming involved in a humanitarian project, but I couldn’t ignore their plight and started by bringing them small amounts of food, as well as toys for the children.

‘Then a friend, Craig Wherlock, who is a keen cook, became involved. He started cooking nourishing meals for us to take and from these simple beginnings an organisation called The Refugee Solidarity Movement Thessaloniki, was formed and it is now feeding around 100 people a day.’

A crowd funding campaign is paying for the ingredients and Sheba said: ‘Anyone who would like to make a donation can do so in the knowledge that every cent goes directly to the refugees.’ Just go to: www.youcaring.com/operationsinbad and follow the links.

Most of the refugees are from Syria, but there are also a lot of refugees from Afghanistan as well, all of whom are fleeing war and persecution.

‘Each of them have horrific stories to tell,’ said Sheba, who explained that most of them have had no choice but to pay €1,000 to get on the most makeshift of boats and make the perilous journey to Greece – a country that does not have the infrastructure to cater for the thousands of refugees who are arriving there on a daily basis.

‘Although the Greek people are suffering from the economic downturn and the austerity measures imposed upon them,’ Sheba said: ‘there are many individuals who are willing to share what they have.

‘There is, however, resistance from right wing groups, such as Golden Dawn, and that has a negative effect on the work we are trying to do, as well as the well-being of the refugees.

‘Most of these refugees (having landed on one of the Greek islands where they are given papers) are merely travelling through Greece on route to other countries. It is whilst they are on this journey that they are at their most vulnerable to abuse, and run the risk of slavery,’ said Sheba.

As they journey through Thessaloniki, they are given food and a few essentials, such as toiletries. There are other groups helping along the way.

Although Sheba has since returned to her home in Bantry, she said she has forged strong links with the voluntary organisation and would like the people of West Cork to support the work it is doing.

‘I am planning to do a benefit gig in Cork in September, but in the meantime I am looking into the possibility of establishing a pop-up charity shop dedicated to helping the cause of refugees.’