Mary Egan with a glass of cloudy water and, right, her bath, filled recently with tap water. 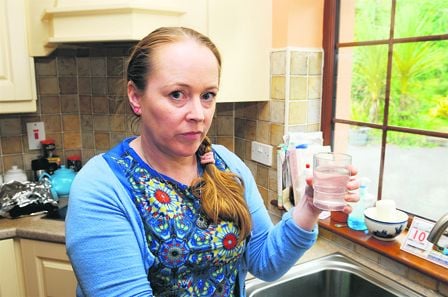 Mary Egan with a glass of cloudy water and, right, her bath, filled recently with tap water.

A BANTRY mother-of-four wants Irish Water to guarantee that when she turns on the tap at her home, she can be confident that the water is both clear and safe to use.

‘We just want drinkable water, that’s all,’ she told The Southern Star this week. ‘We have gotten so used to not using the water from the tap, not even for brushing our teeth, that it seemed quite normal to be buying litres of water each week as part of our household shopping,’ said Mary Egan.

However, after years of ‘putting up with it’, Mary, from Reendonagan, now feels that something must be done to ensure confidence in her water supply.

‘You never know what you’re going to get when you turn on the tap. Sometimes the water is brown, sometimes cloudy or sometimes clear, but there is always a smell of chemicals. I take the children to my mother’s to wash them. We spend over €10 a week on bottled water and even though we have been told the water has been tested and is ‘acceptable’, the water coming from our taps is far from acceptable for me to give my children,’ Mary said.

The water quality in Bantry has long been a concern, not only for homeowners, but for the many businesses that depend on clean water for their customers.

‘The water has never been good here in town. We have frequently had customers complaining about the smell and the taste of the water, so much so that we invested €2,000 in a filtering system,’ said Lianne McCarthy, manager of the popular Brick Oven restaurant in Bantry.

‘This system filters out the fluoride in the water, but for us it has also given us the confidence that the water we use to wash veg, or in our dishwashers, or most importantly – serve to our customers – is safe,’ she added.

A spokesperson for Irish Water said that the company was aware of the recent problems with the water supply in Bantry, which left most of the restaurants and cafés without water services after a mains burst.

‘Often times, following a burst, the water can come out of the taps discoloured, but running the taps for a time should address any issues,’ a statement said.

Local FG Cllr Mary Hegarty said she was ‘constantly making representations to Irish Water’ about the water in Bantry.

‘The quality of water in the area is totally unacceptable and I would ask anyone who is experiencing difficulties with their water supply to contact me so that I can highlight these problems,’ she told The Southern Star.