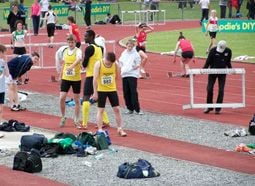 FINE Gael TD for Cork South West, Jim Daly, has confirmed this week that Cork County Council has formally offered the use of four acres of land to Bandon Athletic Club for the design and construction of a new track and associated works at Cloughmacsimon, Bandon.

‘I am very happy with the outcome of these negotiations which have been ongoing between the club and Cork County Council for the past twelve months or so. I have to commend the Council for the very proactive engagement with me on this matter also. From the outset when I first raised the issue with the property section of Cork County Council, the officials in charge gave me every encouragement, which I turn relayed to the athletic club committee,’ said Deputy Daly speaking to The Southern Star.

Deputy Daly said that he had held a number of meetings with the development committee of the athletic club, and that much time and consideration was involved in preparing a submissions which was referred to by Council officials as ‘very impressive.’

‘The Council have now requested the club to resubmit an amended proposal to be further considered in a master plan for the entire eight acres plot which is currently owned by the housing agency. The development of a new housing project on the remaining four acres of this plot of ground will hopefully progress to design stage in parallel with the athletic clubs project.’