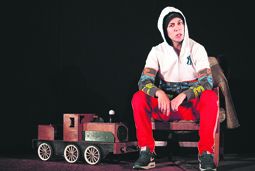 Kate Stanley-Brennan, who gives a powerhouse performance in Carmel Winters’ powerful play, ‘Witness,’ which will be playing at The Everyman in Cork next week.

Ballydehob-based writer and director Carmel Winters’ fabulous play Witness, having been staged at the Civic Theatre, Tallaght, from February 23rd to 28th and the Project Arts Centre in Dublin from March 2nd to 7th, will be at The Everyman in Cork, from Monday next, March 9th, to Saturday 14th.

Having seen it during its sell-out run at the 2013 West Cork Fit-up Theatre Festival, we can wholeheartedly recommend this tour de force one-woman performance by Kate Stanley Brennan. Arguably her most impressive piece yet, Witness, broadly based on Carmel’s award-winning feature film Snap, sensitively deals with the difficult subjects of abduction and abuse.

Kate Stanley Brennan plays both characters superbly, 29-year-old Shannon and her 14-year-old son Stephen. She gives a riveting portrayal of both mother and son, moving from one character to the other with ease and believability.