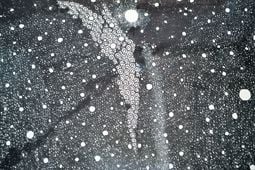 The drawing by artist Jim Wilson, which includes believe is an angel hidden in the detail.

A VISIT by three wise people revealed an unknown angel in a drawing by artist Jim Wilson.

It was the first morning of his exhibition at 44 Bridge Street, Skibbereen, when the Scottish artist overheard two elderly women speaking about ‘a presence’ in the gallery.

Jim – who has been living with his wife Jennifer at Kildee, near Dunmanway, for the last four years – said he thought nothing of it and possibly put it down to the large ink drawing of the ‘monstrance’ (a sacred item containing communion bread) in the corner of the room.

Later, as Jim was about to close up, a man, whose name he doesn’t know, approached him and asked him if he knew that there was an angel in the second drawing in his ‘Celestial’ Triptych.

‘Of course, I didn’t,’ said Jim, who is ready to admit that the presence of the angel is now clear for all to see, and he hopes many will do just that. The exhibition runs six days a week, all through the summer, until September.