Ann Davis (third from left) chief mourner at the funeral, at the Sacred Heart Church in Rath, Baltimore, on Monday of her son, Barry Davis Ryan, who died along with his girlfriend and father in a tragic drowning incident on June 30th last. 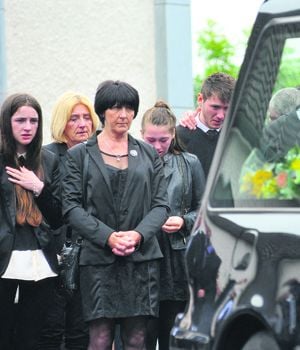 Ann Davis (third from left) chief mourner at the funeral, at the Sacred Heart Church in Rath, Baltimore, on Monday of her son, Barry Davis Ryan, who died along with his girlfriend and father in a tragic drowning incident on June 30th last.

‘BARRY, just like his father, was a hero who, without hesitation, was willing to die for love.’

Danny Kenny, the uncle of Barry Davis Ryan, paid tribute to the 20-year-old student who lost his life when trying to save his beloved girlfriend, Niamh O’Connor, after she was swept into the sea near the Beacon in Baltimore on June 30th last. And, just as he tried to save her, his father died trying to save them both.

In the eulogy read at the requiem mass that was held in Sacred Heart Church in Rath on Monday, Danny Kenny said that of the many interesting and wonderful things Barry did in his short life, the thing that stood out in particular was ‘the love he had for his family and friends, and the love he had for his soul mate, the beautiful Niamh O’Connor, whom he loved with all his heart and selflessly died trying to save.’

Sometimes, he added, great good may come from bad and, in death, Barry not only brought the ‘wonderful and mighty West Cork community so closely together, he galvanised an entire country, such was the communal and collective effort made to bring his body home.’

To every single person involved, Danny Kenny said the Davis family wanted to offer their ‘sincerest, heart-felt thanks for their endless support, tireless efforts and very hard, and often perilous, work.’

He said these people worked in ‘the best human and Christian spirit over the last two dramatic and testing weeks.’ He thanked Baltimore RNLI, the Irish Coast Guard and the Civil Defence, Schull Inshore Rescue, the West Cork Underwater Search and Rescue Unit, and the Garda Siochana, especially the Garda Liaison Officer, Pauline Reid, who has been ‘a rock’ to Ann Davis, Barry’s mother, since the tragedy began.

In the face of such overwhelming support from the community, Danny Kenny made certain to thank ‘every volunteer – from those who made the tea, brought sandwiches and provided accommodation – to the many divers who bravely worked below.’ To these people, he said: ‘Thank you, thank you, thank you.’

Danny Kenny said Barry Junior’s final resting place at Tullagh Graveyard in Baltimore is beside his father, ‘Big Barry’, his uncle Donal, his grandfather Patrick, and his nana, the lovely Hannah Davis whose first anniversary is on the 22nd of this month.

Barry Davis Ryan – a young man invariably described as ‘lively, humorous, sociable, intelligent and artistic’ – will live on in the memory of his family and his friends, some of whom paid him tender tributes, describing him as ‘the kingpin amongst us,’ and ‘the man we all aspired to be.’