Murder accused Graham Dwyer told his wife he knew his alleged victim Elaine O'Hara - and called her an 'awful girl', his trial heard this week. 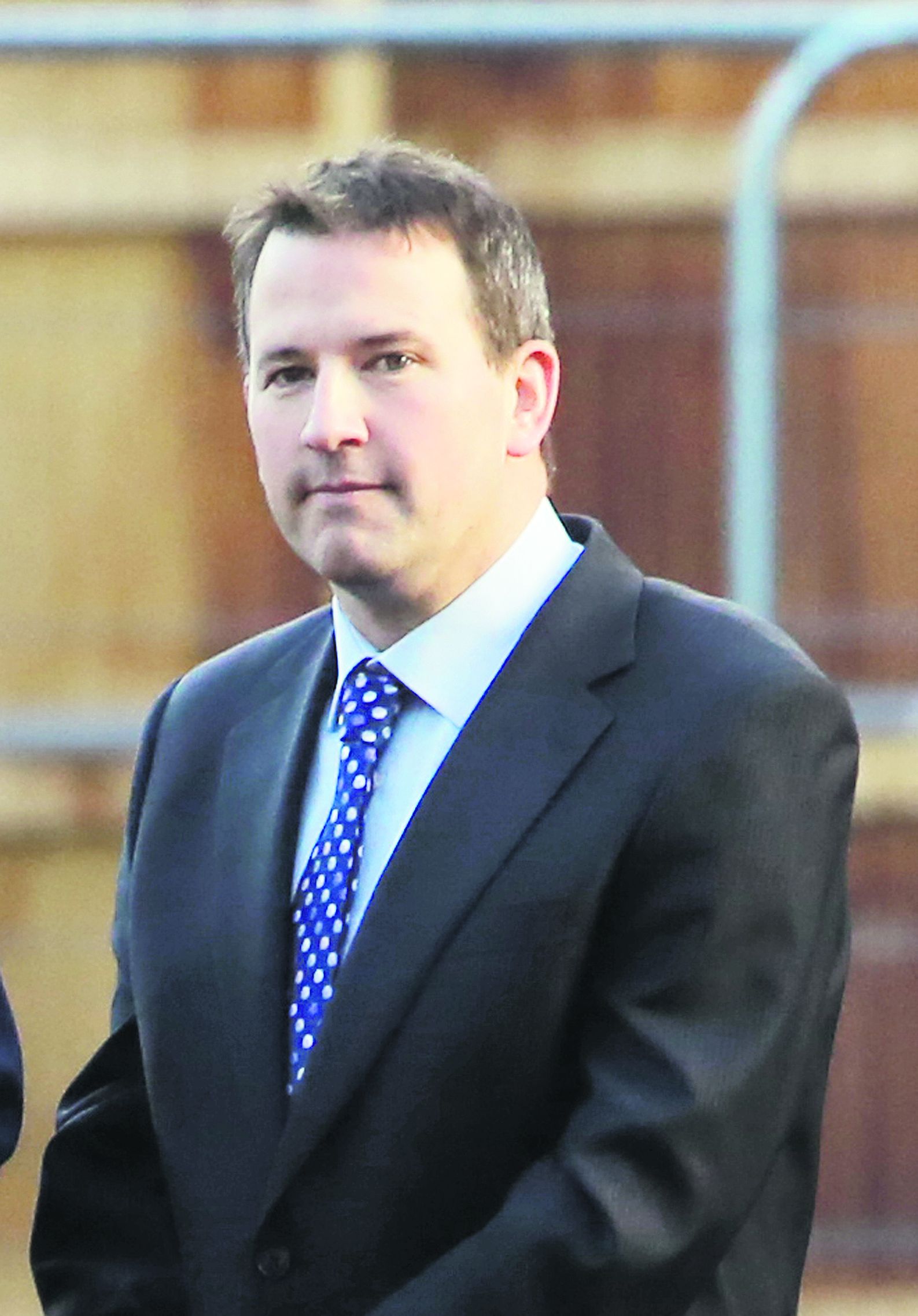 MURDER accused Graham Dwyer told his wife he knew his alleged victim Elaine O’Hara – and called her an ‘awful girl’, his trial heard this week.

‘Do not believe the gardai, they actually have no evidence apart from my name and someone else’s phone number in that awful girl’s diary,’ he wrote in a letter to Mrs Dwyer that she received on February 28 last year, the court heard.

Mr Dwyer’s wife Gemma told the court that she recognised a spade found near where Ms O’Hara’s remains were discovered in the Dublin Mountains as being from the garden of the home she and the accused lived in.

‘That’s our spade,’ she told a packed Court 13 of the Criminal Courts of Justice complex – while Mr Dwyer sat a few feet away from her.

She said she recognised the spade, which gardai said they recovered from near the spot in Killakee Wood, Rathfarnham, south Dublin where the remains of 36-year-old childcare worker Elaine O’Hara were found.

Mrs Dwyer, who is – like her husband – an architect, was giving evidence in the trial of her husband Graham, who is accused of murdering Ms O’Hara in Killakee Wood on August 22, 2012.

Mr Dwyer, a native of Bandon, but with an address at Kerrymount Close, Foxrock, Co Dublin denies the murder charge.

Gemma Dwyer said she met her husband around 1997 while they were both studying architecture at the DIT campus on Dublin’s Bolton Street.

Some elements of her husband’s letter to her were read to the jury, including the lines: ‘I did know her, I was helping her and I was not totally honest with you. There is another man, someone who likes Real Madrid and wears pink underwear, who is involved in this. I believe this girl committed suicide and this man disposed of some embarrassing items on her behalf.

‘She tried to kill herself several times. Why do you think none of her family are pushing this?

‘I saved her life once. She was just released from a mental health hospital and she bought eight prescription drugs.

‘I should have gone to the police back when she was missing, I might have known where she might be, but I didn’t.’

Detective Sergeant Peter Woods then gave evidence that he went to the accused’s home on December 5, 2013 and took possession of a second spade found at the family home. It had been left in a compost heap after the search of the premises in October 2013, he said.

Earlier, the sister of murder accused Graham Dwyer told the trial she knew nothing about a mobile phone number that gardai had interviewed her about.

His sister Mandy Wroblewski was asked to write down her home and address on a piece of paper, which was handed into court, shown to both sides and to the jury.

She was asked if it would have been common to receive communication from her brother by post.

‘Birthday cards, anniversary cards to myself or my husband,’ she replied. She was asked if there would be any mistakes in the address and she said that sometimes the number would be missing.

She wasn’t in a position to say who had written the addresses as, she said, both Graham and his wife’s handwriting were similar.

She was asked about a 083 number previously mentioned in the trial. She didn’t recognise it.

On one, she discovered there had been log-on attempts to the website, alt.com, using the profiles, SubOrSlaveForYou and Submissive391.

She could also see other profiles viewed using Submissive391; one of these included Architect77, which had been viewed four times in 2007.

Another profile viewed on the site was Architect72 and she found evidence connecting this profile to the email address, [email protected] She was then able to find traces of communication between Ms O’Hara and that email address.

An email from [email protected] to Ms O’Hara on September 19th, 2008 was then read out.

‘I hope you’re keeping ok,’ it began. ‘I’ve assumed you are trying to get better and trying to stay away from what we do together. I completely understand. I am always thinking of you and hoping you are safe and not suffering on the inside,’ it continued. ‘Anytime you want, I will gladly carry out what I promised I would do, regardless of the consequences. All you have to do is ring me from a call box and say where and when, even if it’s months or years away,’ wrote the sender. ‘I am always waiting. Get in touch any time you want to for a chat or even for the simple, harmless things you want to do. Take care x Sir.’

The jury heard the Apple laptop contained clothed and unclothed photographs of the alleged victim.

Giving evidence to Judge Tony Hunt, Detective Garda Brid Wallace of the force’s Computer Crime Investigation Unit also said she found several documents on Ms O’Hara’s laptop when she examined it – including one relating to bondage and slavery.

D/Garda Wallace told the jury that she examined the Apple laptop with special software that can extract files from it, even if they have been deleted.

She said that, as well as searching for the details of text messages, she examined the laptop for text documents, image files and movie files.

She said she found movie files, some of them maintsream, some of an ‘adult pornographic’ nature.

There were also images of Ms O’Hara that appeared to be self-taken and some that had been ‘obviously taken by a different person’.

These included photographs in which she was clothed, partially-clothed or unclothed.

The detective had also used specialist software to view a number of documents on the laptop.

The first document was a book entitled Serial Violence: Analysis of Modus Operandi and Signature Characteristics of Killers by Robert D Keppel and William J Birnes. It was part of a series entitled: Practical Aspects of Crime and Forensic Investigations.

The court heard the letter had an address in Newtown Park, Blackrock, south Dublin that it was known Ms O’Hara was using between 2010 and 2012.

The accused fantasied about stabbing a woman while having sex with her, his ex-partner told his murder trial last week.

Emer McShea also told the court that he used a bread knife to pretend to stab her while they were having sex.

Ms McShea, who lives in Ballyshannon in Co Donegal, told the Central Criminal Court about her past relationship with architect Mr Dwyer.

They had formed a relationship in the early 1990s while they were in college.

Ms McShea and Mr Dwyer had a son together in 1992, Sennan.

She said that at one point the accused began to bring a kitchen knife into the shared bedroom and pretended to stab her while having sex, but didn’t stab her.

The court then heard that in November last year, Ms McShea came home from work and noticed a card addressed to her son Sennan while she was collecting her post.

She recognised the handwriting as that of Mr Dwyer, the court heard, and then contacted her son – who gave her permission to open it.

It was a birthday card, with a note on the inside that said: ‘Everything going well here, all forensics clear and we are sure of an acquittal now that we have a mountain of evidence that it was a suicide.’Ms McShea and Mr Dwyer’s son Sennan also took to the stand and agreed that he had gone on holiday to Cork with his grandparents in 2006, at the age of 14.

Mr Dwyer’s younger brother Brendan told the court the last time he met the accused was at Blind Strand [near Courtmacsherry] in Cork in September 2013.

When asked who was there, he replied: ‘Myself, my dad, Graham, our brother James and James’ brother-in-law.’