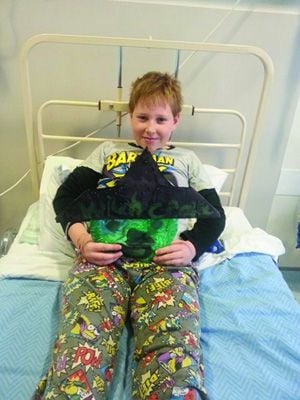 AARON O' Sullivan (9) from Lissarda near Macroom is just one of the sufferers of a rare disease who are compelled to leave the country for medical care.

Aaron suffers from EDS – which involves a wide range of debilitating symptoms, including chronic pain and fatigue, fainting, heart irregularities and frequent partial joint dislocations. His symptoms are so disabling, that he occasionally has to use a wheelchair.

Despite feeling consistently unwell, Aaron has had to make several arduous journeys to London for expert care. Aaron's sister Kerri, (15), his cousin Mia (6), and aunt Gerrie also have EDS and must also travel to the UK for treatment.

On Rare Disease Day last Saturday, the Irish EDS and HMS groups called on the HSE to stop the neglect of thousands of people in Ireland with EDS – Ehlers Danlos Syndrome (EDS). HMS, or Hypermobility Syndromes, is an umbrella term for a group of potentially life-affecting medical conditions of hypermobility.

EDS, a rare connective tissue disorder, occurs in approximately 1 in 5,000 people and can affect every system in the body. It can lead to a wide range of apparently unconnected symptoms, including joint pain and hypermobility, chronic fatigue, gastrointestinal issues and heart complications. Symptoms can vary from mild to life-threatening.

A huge deficit in expertise and resources in this country means that an increasing number of people with EDS are forced to travel abroad for treatment, according to HMS committee member Karen Egan. ‘The majority of these people have no option but to raise funds themselves to cover the staggering amount of costs associated with accessing treatment abroad. In some cases, medical costs run into the tens of thousands of euro.’

Karen added that people’s life savings are being haemorrhaged, and many extremely sick people have to organise their own fundraising events. Disturbingly, nearly 50% of patients surveyed by Irish EDS and HMS stated that financial considerations prevented them pursuing necessary treatment abroad. Many EDS patients are struggling to hold down jobs, look after families and contribute meaningfully to society, whilst simultaneously forging their own clinical pathways at great personal cost, both financially and in terms of their well-being, Karen added.

The HSE Treatment Abroad Scheme provides funding for patients to access medically necessary treatments abroad. However, EDS applicants are very frequently refused as they are informed that ‘appropriate treatment’ can be accessed in Ireland.

Karen Egan vehemently contests this assertion. ‘On many occasions doctors begin consultations by asking patients how to spell Ehlers Danlos Syndrome. That is a good indication of the level of knowledge we are dealing with in this country,’ she told the Southern Star.

‘A growing number of specialists are actually advising patients to travel abroad for treatment as they feel ill-equipped to treat the complexity of EDS symptoms which can arise,’ according to Karen.

She added that some patients have been told their doctor does not feel comfortable treating them. Most people with EDS meet a very fractured and sometimes even unsafe level of care in this country, she claimed.

The HSE launched the National Rare Disease Plan, based on EU Council Recommendation 2009/C 15/02, in July 2014. Whilst the rare disease community welcomed this plan, we have yet to receive any concrete updates regarding progress towards implementation. The very existence of the National Rare Disease Plan is, in itself, an admission that current service provision is not of an acceptable standard, Karen said this week.

She is now appealing to the HSE to address the growing crisis for EDS sufferers in Ireland. ‘We need concerted efforts to educate the medical professionals in this country and also broader parameters in terms of eligibility for the Treatment Abroad Scheme for people with EDS, in the absence of appropriate care and services here in Ireland. It is time to stop the neglect,’ she said.