I WONDER what difference it made when Toyota replaced their Corolla name for the compact hatchback with Auris, back in 2007? Probably not a lot.

The important thing was that the name ‘Toyota’ was in front of it. Though in Ireland for some 12 years, it also meant that Corolla wasn’t the top-selling nameplate here. But when we combined the sales of Auris and the Corolla sedan, they were the collective top seller.

Anyhow, that’s all tarmac under the wheels since this 12th generation Corolla arrived and the hatch regained its original name. On sale here since 2019, the model went back to the top last year, and so far this year has just been pushed off the perch by the latest Tucson from Hyundai.

I think they’re probably happy enough at Killeen Road — the Toyota brand is comfortably leading the pack thanks to having no less that four models in the top ten sales here. And Corolla is by a long margin the Japanese maker’s most popular car in Ireland.

I’ve driven both the saloon and the estate version since this generation arrived. I know that I liked both visually. And that means there was unlikely to be anything to turn me off the hatchback. Indeed, there isn’t. It’s a good looker, and follows the theme of recent years when almost every Toyota model has come well out of the stylistic doldrums which had been an issue in previous generations. Which, among other things, allowed the Korean Hyundai-Kia juggernaut to leapfrog their Japanese competition in both design and perceived quality. 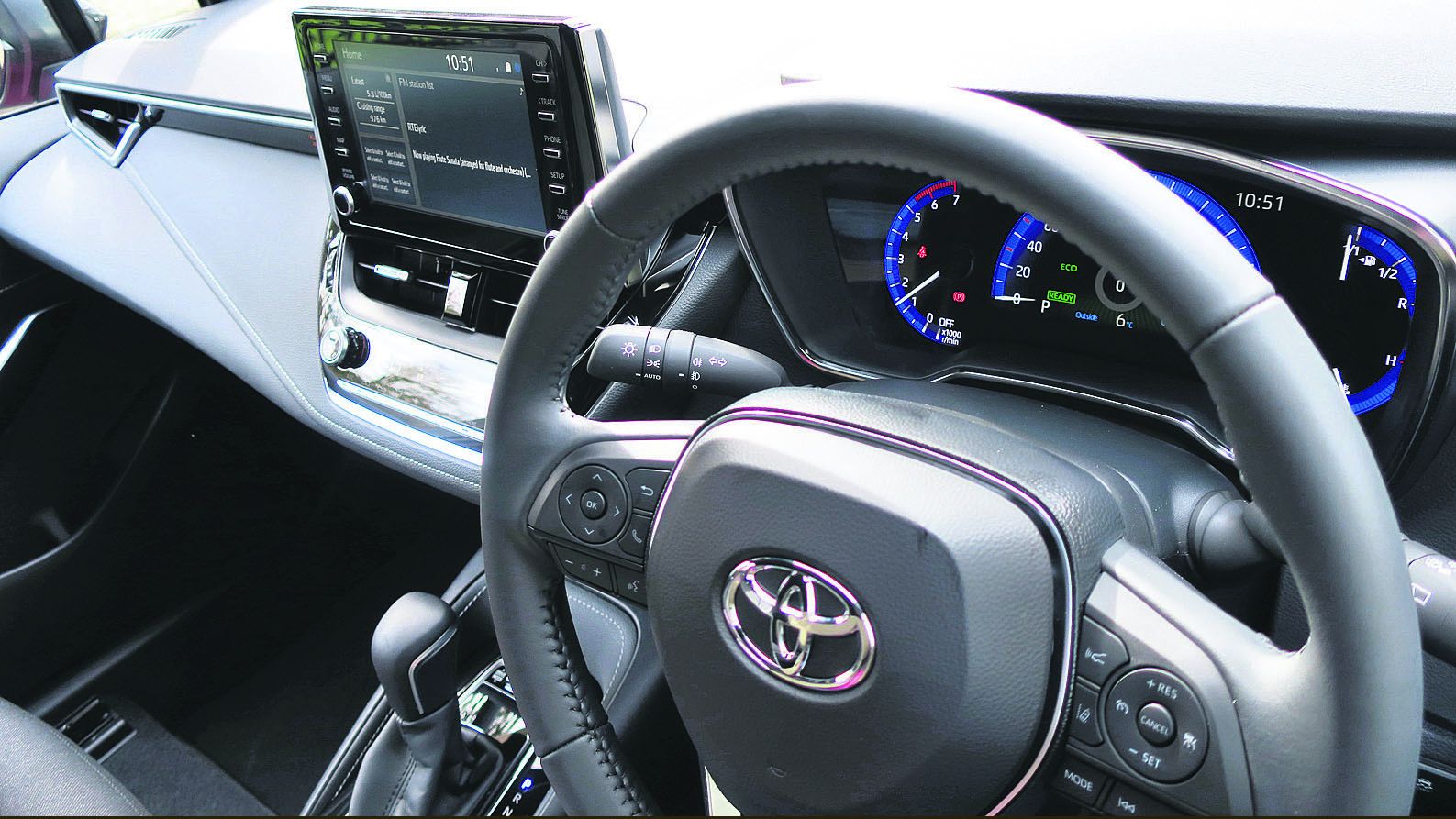 Sit behind the Corolla dashboard now and there’s an immediate sense of satisfaction. Perceived and actual quality, check. Good style, check. Unambiguous instrumentation, check. Good seats, check. My only inclination to complain is that the steering wheel might be a tad on the thin side — but that would be absolutely subjective.

Plenty of room in the back for a couple of adults or three teens. Decent luggage space behind them too for the dog, if they had one, and the bits and pieces of daily shuttling family around. And while crossover-SUVs have been the growing threat in car styles for some years now, it’s interesting to note that five of the top ten cars in Ireland are hatchbacks. The format is far from dead.

Corolla is a hybrid, of course — nowadays you can only get that powertrain in the model. A 1.6 petrol engine mated to the electric motor and battery. That saves fuel costs over petrol alone, by more than €1,000 over three years according to Toyota’s reckoning. It saves adding 1.7 tonnes of CO2 to the planet’s atmosphere, or is the equivalent of planting 25 trees over that same period. It dramatically reduces nitrogen oxide emissions. And I always appreciate the fact that the hybrid system comes with an automatic transmission as standard. 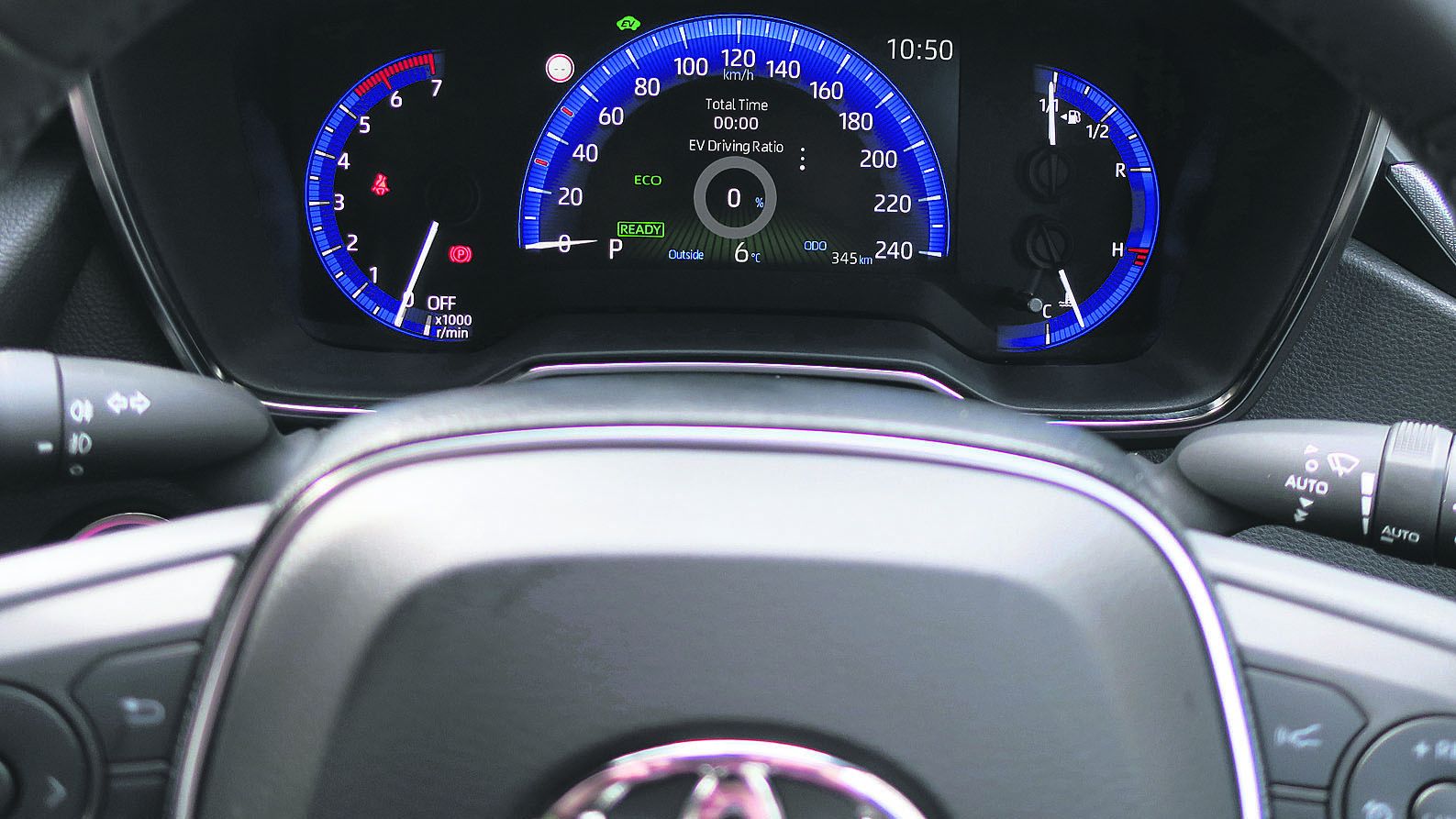 One of the additions to the Corolla this year is quite tiny, a space in the settings that lets you know the percentage of time you have been driving on electric power over a journey. The idea being, I suppose, that it will encourage you to be less leaden with the right foot.

The results didn’t surprise me. Hybrids are really good in some driving circumstances, not so useful in others. For instance, an hour’s trip through some twisty mountain roads suggested the car was in EV only 3pc of the journey. But once on the flat, that quickly recovered to 12pc. And tipping around town it was scoring in the late 20s and probably more if I was spending much time in slow traffic. So yes, hybrid does work, and I’d say that over those afore-mentioned three years, the claimed savings will happen.

The Corolla comes with all the safety and driver aid stuff that I really don’t bother mentioning anymore, because they’ve become standard.

There are also three driving modes, Eco, Normal and Sport. As usual, they offer different responses to throttle, shift settings, and in the case of Eco, air-conditioning. For most of my time with the car, I found it quite fine in Eco. Getting an overall 5.1L/100km, I was quite happy with.

The car proved to be a steady and well-insulated drive, even on poor enough surfaces on some of those mountain roads. That has always been a given with Toyota, the products are essentially unbreakable. (I remember arriving at the top of a mountain in Bolivia, after a fairly rough drive, to a village where all the cars seemed to be 10-year-old Corollas. Endeth the lesson.)