THE sound was very recognisable. A deep throaty V8 that I’d heard before, several times. That I’d driven a few times too, the first time a few years ago in Munich. I turned, and there it was — a yellow Ford Mustang GT coming up the hill. I remembered how much the car, and the sound, had attracted attention.

It still does. I watched it go past. Noisy brute. Then I got into my car of the week, checked the traffic, and pulled away from the kerb. In absolute silence.

Nobody was going to call my Volkswagen ID.4 a noisy brute. The second dedicated electric car from the German brand is sleek, smooth and silent.

Sleek in looks, very much. There’s nothing of the blocky SUV look like the Tiguan, but rather some very svelte metal-shaping. Clever detailing in the style of the roofline and especially the rear three-quarter view. Enough to turn heads. Maybe not as much as the Mustang, but interest garnered nevertheless, without the need of a V8 sound.

It’s a good looker inside, too. That was mentioned by anyone who looked in, or got in, while I had it. There’s a finish here that, while on a minimalist bent, is not in any way spartan. The fittings quality is high, and the trim was a well-conceived mix of dark tan, mid-grey and black that gave a comfortable feel in the space. 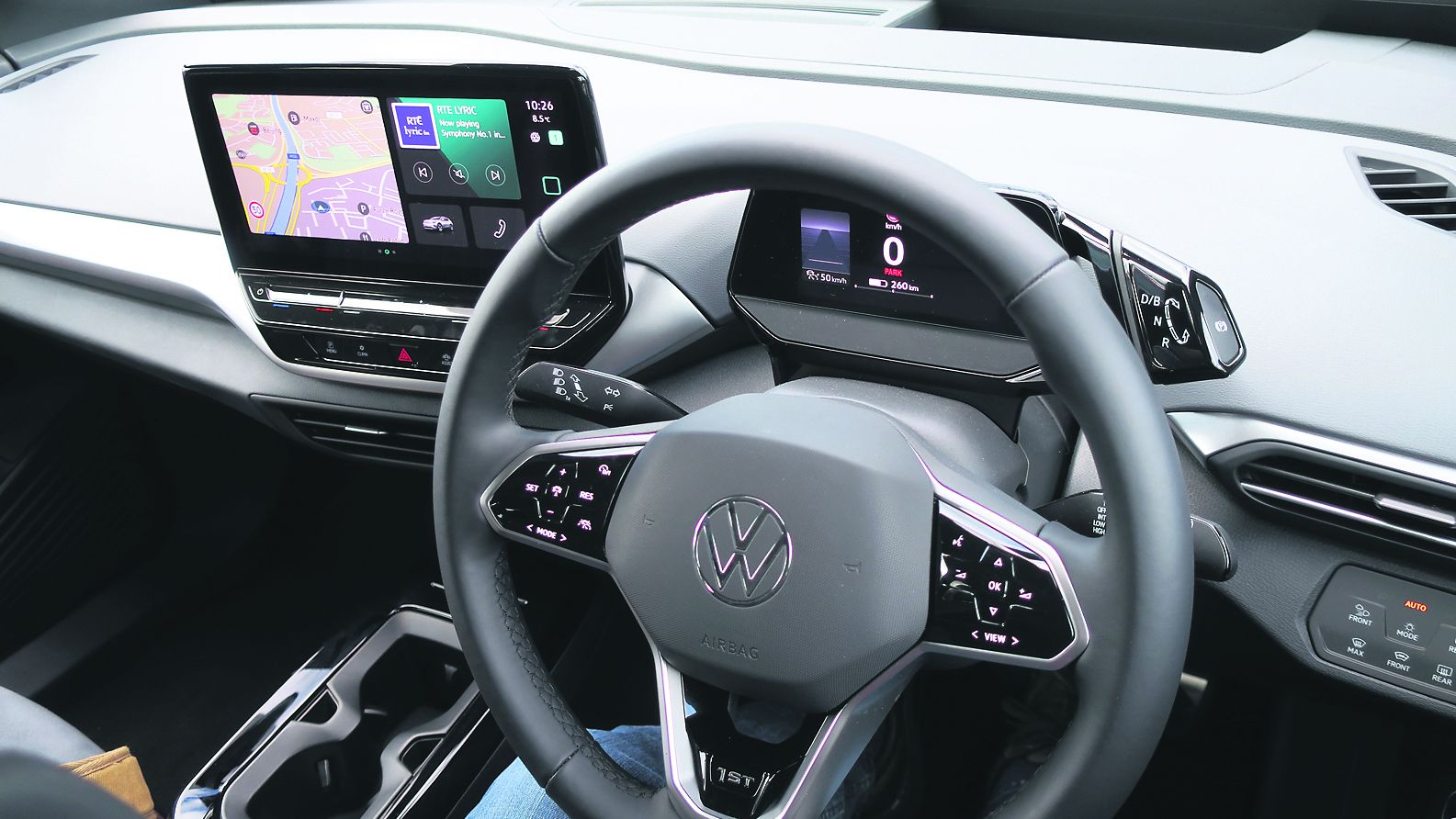 Instrumentation is similar to that in the ID.3 hatchback I drove late last year. The ‘floating’ style of both the primary information panel and the centre-dash screen are distinctive to VW’s electric vehicle ethos.

The driver’s information is designed very much not to overwhelm, so there’s a very basic set, which can include inline navigation prompts when a destination is set on the centre screen.

The review car also came with a head-up display of the same detail ... but also with a genuinely impressive interactive set of extra visual guides and warnings when the driver assist systems are in operation.

The centre screen has all the usual features, with clear and attractive graphics. The ‘touch and slide’ for volume and temperature adjustment that we got first in the current Golf is a feature.

One niggling annoyance was the fact that adjusting the seat heaters was a ‘double tap’ procedure for anything you wanted to do with them. It’s a measure of how well the ID.4 has been thought through that there wasn’t much else which got me sniffy about the car. 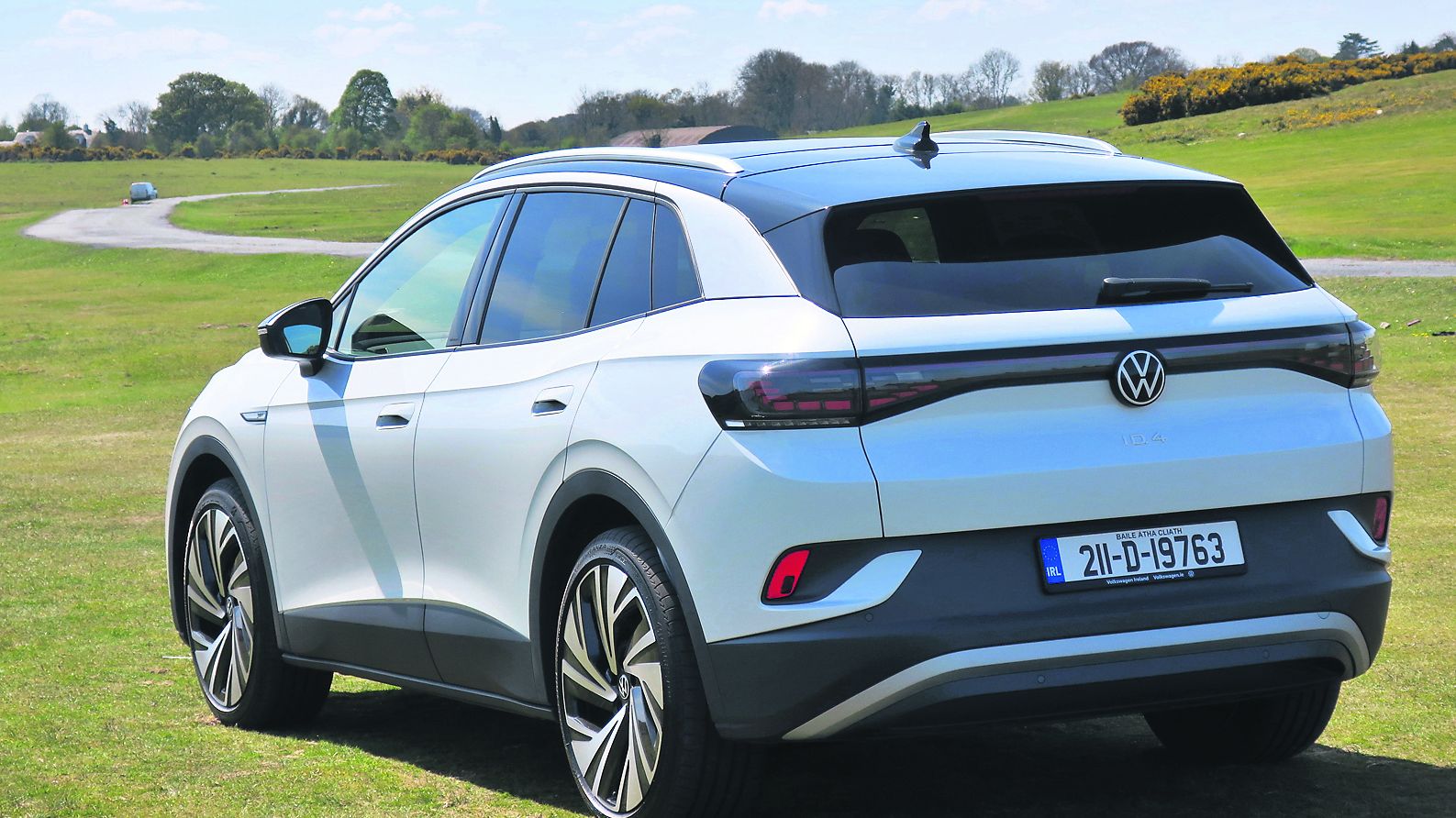 It’s big. Longer, wider, and lower than the Tiguan. Longer than Hyundai’s Tucson. And though longer than the ID.3, it sits on the same wheelbase. Both cars offer rugby-player level room in the rear seats.

I remember being impressed by the hatchback’s driving feel and silence. Both of which apply equally to the ID.4. It’s hard not to feel that Volkswagen is going all-out to become the electric car brand of choice, and with choice, for tomorrow’s world. Today.

Most of my week with it I simply kept the car topped up to 80pc charge from my standard 13A outside socket. After a run down the country and back which left the battery significantly depleted, I brought it back to 80pc at my local ESB high-capacity station in under half an hour.

It meant that I always had at least 330kms available whenever I left home (more than that if I was driving in regenerative urban conditions). More than enough for any normal driving needs.

A slower proper home wallbox charger would keep it topped to 100pc most of the time.

In short, a car that works as any car should.

Without being a loud road runner.

What I liked:  I never disturbed the neighbours.