WHEN Mercedes-Benz produced their first CLS almost two decades ago, they created a new segment — the luxury four-door coupe. One which has been followed by other premium and luxury brands since, but somehow it always seems to me when I get into a CLS that Mercedes still ‘owns’ the space. In a recent time with the current generation — it’s the third since they first launched it — the car felt just as it had originally, a perfect fit.

The idea at the time was to bridge the gap between the E-Class ‘workhorse’ luxury offering which also had versions for taxis and the then ultra-salubrious S-Class. By basing it on the E-Class platform, the CLS was big enough to offer four-door access and good rear seat space for two, while stylistically providing a more distinctive car. The company had produced coupes before, but not with the comfort of rear seat passengers in mind. That said, the CLS was by its nature less roomy than the E-Class, but the designers produced a comfortable space nevertheless.

The new car was well received. It was the era before SUVs became the alternate trend against saloons, and CLS attracted a niche following that was significant and worth its place in the Mercedes range. In 2011 the second generation was produced with somewhat more pizzaz based on the F800 Concept shown at the 2010 Geneva Motor Show. But this time the car got some technical uplift too, gaining the option of all-wheel-drive as well as the AMG performance variant which had also been available in the first one. An estate version was also produced, marketed as a Shooting Brake, but it looked pretty terrible.

The current version, my review car, arrived in 2018. The estate variant is no longer, apart from the odd styling it was probably a victim to the inexorable rise of the SUV as a daily car even in the luxury sector. And it’s arguable that even the saloon, now a five-seater, by the way, has also suffered for the same reason, as global sales didn’t get the fillip from the latest that the second generation had given to the model. But there’s no gainsaying the style, total elegance in a size that’s not intimidating. When I had a chance to notice, stopped in traffic, I could see that people still look at a CLS. 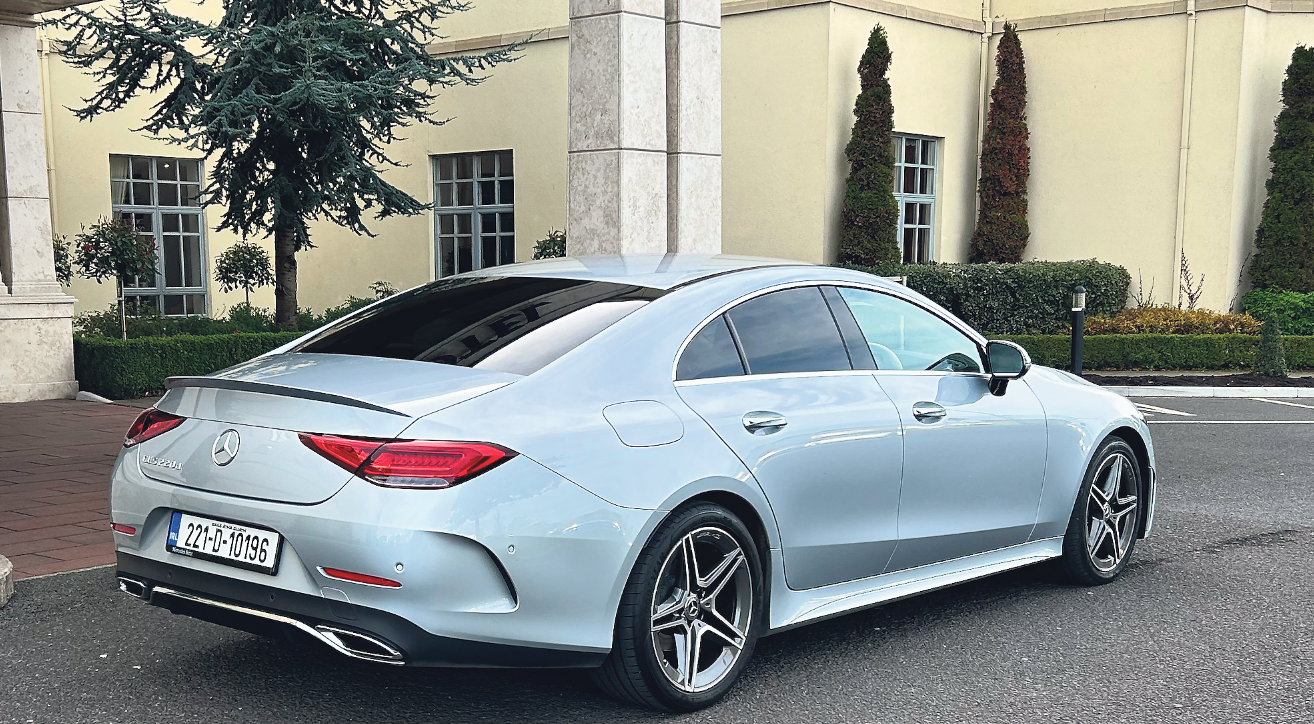 Even though I’ve had a year of many Mercedes-Benz cars, largely because of their rampant rollout of new electric EQ models, and I have enjoyed them, there was a real sense of satisfaction when I got into this one. Back to ‘normal’ with a 2.0 very refined diesel and a 9-speed silky auto transmission which wafted me through several counties during the week. Notwithstanding its strong torque, the diesel engine didn’t match the accelerative capabilities of some of the EQ models I’ve been driving, but a 7.5s sprint is respectable.

The interior aesthetics are as smooth as the outside sheetmetal. Though it did take a bit of getting used to when the unfortunately named MBUX multimedia and instrumentation was first introduced across the brand’s models, I have become very comfortable with it and can manage its various choices quite intuitively. The beige leather trim included the steering wheel, which as a consequence looked quite chunky but suits the whole cockpit sense. The grey wood-texture trim of the lower dash had continuity in door panel sections and, as the pictures show, it all seems to work well.

There are a number of AMG performance details which come as standard with the car, some cosmetic like the alloys and elements of the body-styling. Others are technical, such as a more powerful braking system and a lowered suspension. The LED headlights system I very much appreciated on some dark nights, as I did the automatic dipping. And the onboard navigation package seems to be hooked into Google’s excellent traffic density indication.

It was one of those weeks when I had the chance to put up some respectable mileage, and I have to say I enjoyed every kilometre. This may be the age of the electric, and of the SUV, but there’s still, thankfully, a place for cool and elegant saloons. Granted, an expensive space.

What I liked: A super smooth driving week.