IT was a weekend of sporting triumphs with Kellie Harrington bringing home gold to Portland Row and the Cork hurlers eventually killing off a particularly vicious variant of Brian Cody’s Kilkenny to earn a place in the All-Ireland Final for the first time since 2013.

There was a feeling of glory days returning, somehow, as if all was well with the world again.

Then we were landed with a bad dose of The Glenroes, that feeling of dread you get on a Sunday night after a lovely weekend, with half your homework left to do and Miley Byrne staring out at you through a farmyard gate, as if to say ‘what the hell are you doing with your life at all at all?’

The Glenroes this week arrived in the form of the IPCC’s report on global warming. In short, Earth’s climate system is changing across the entire planet and we humans are worsening its effects which are ‘widespread, rapid and intensifying’.

Some of the changes are now inevitable and ‘irreversible’, climate scientists have warned. It would make you want to just crawl into a corner and lie down.

There is still hope, however. If we halve emissions by 2030 and achieve net-zero emissions by 2050, we can still contain temperature rises to within 1.5 degrees above pre-industrial levels.

If we don’t, well you’ve all seen the images of wildfires from Greece this past week. And despite recent articles claiming that Ireland will be one of the top ten places to move to in the event of a global climate catastrophe, this would really be the equivalent of moving to the attic with the kitchen on fire. Basically, the future for our kids and grandkids is too terrifying to contemplate if we don’t change our ways, and fast.

Politicians around the globe were quick to respond to the contents of the report, of course. ‘Today’s report makes for sobering reading, and it is clear that the next decade is going to be pivotal to securing the future of our planet …’ said UK prime minister Boris Johnson, probably from a private jet somewhere.

In Leinster House, the government wound up a load of Green Party spokespeople and unleashed them onto the plinth to face the music.

It can be overwhelming, reading these reports. We’re all afraid of what’s to come but what can we really do ourselves on a daily basis, given our way of life is so inherently destructive to the natural world?

Like you, I’ve hovered over the recycling bin for hours on end trying to decipher what I can, or can’t, put in. Is this hard plastic or soft plastic? Am I really saving the planet – I’ve just spent ten minutes washing the lasagne off with perfectly good drinking water? Will putting this avocado stone in the food waste bin really make a difference, given it’s already done more air miles this year than Mick Jagger?

Meaningful change will have to be made at a global level and the system of growth-obsessed consumerism on which all our economies are based needs a radical rethink.

How this can be done fairly across the developed and developing worlds with a so-called ‘just transition’ will be a political challenge of unprecedented magnitude.

And you’ve all seen how ‘just’ we are in the West with the vaccine rollout.

But this is a solutions column, as you all know. This week, for a change, I’m writing from West Cork, overlooking a field of extremely healthy-looking cows who are presumably farting us slowly towards extinction.

In recent days, I’ve had the chance to travel across our beautiful region, through small townlands and bustling market towns, and I had an idea. We’ve already got a blueprint in Ireland of how to capture the public imagination and get communities working to meet climate change head-on.

The key, ladies and gentlemen, is inter-community tribal hatred. We saw it playing out in full force on the hurling pitch last Sunday when The Rebels met The Cats and we see it play out in small communities every day across the land. Nothing unites us more than our petty resentment of ‘the other crowd up the road’. 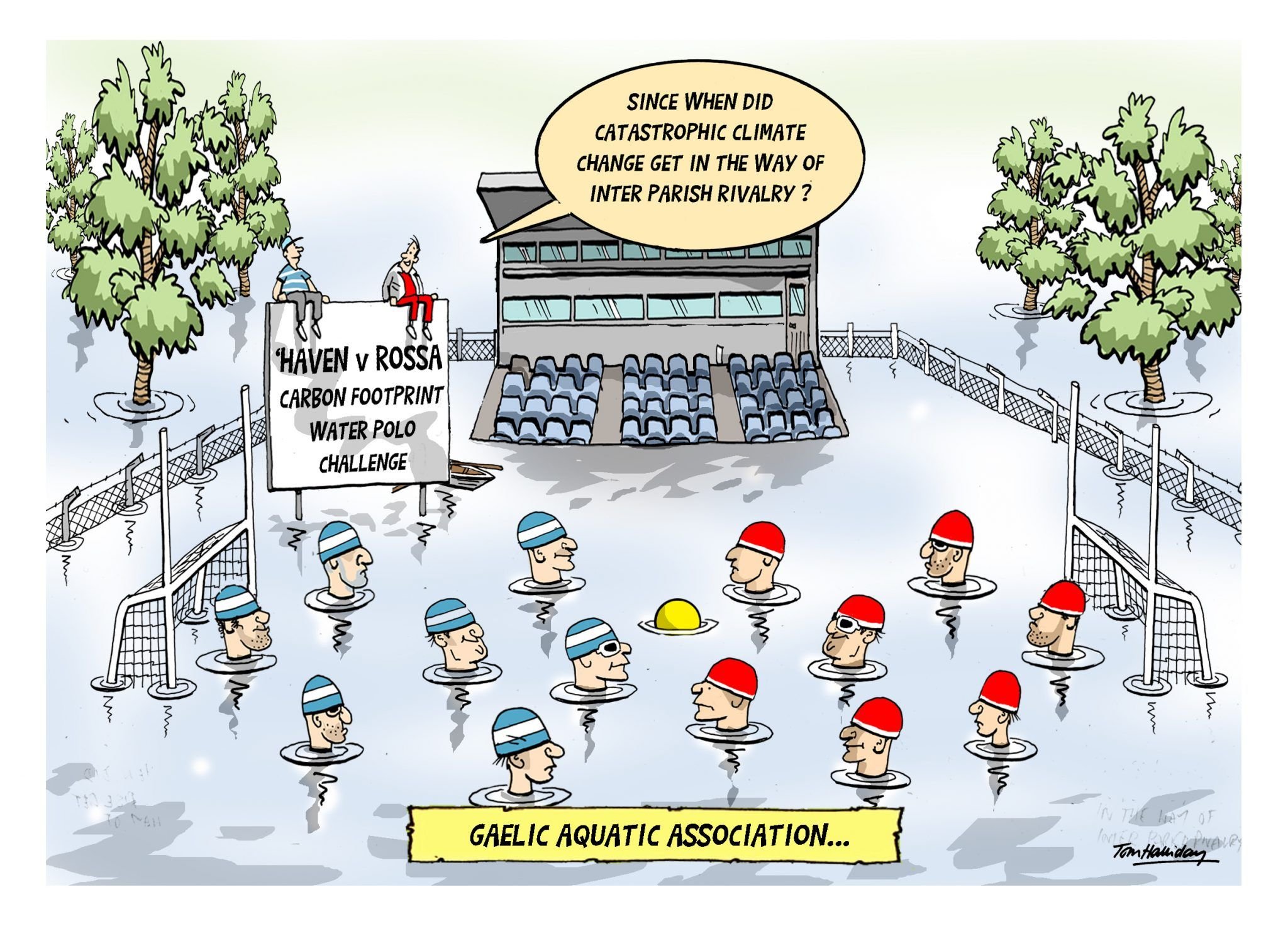 So I think we need to harness this local rivalry by creating a sort of national Tidy Towns competition, except for climate action. Brother will fight against brother, in an effort to retrofit their bungalows. Townies will go up against boggers as they carpet-bomb urban centres with bee-friendly wildflower seeds.

Areas could then be judged on a sort of ecological heat map – eco-heroes get a green colour for their area, with the bad polluters getting red. We’d essentially be taking our inter-community rivalries and using them to save the planet.

Rewards could come in the form of grants, perhaps, but mostly the reward will be the smug satisfaction of beating ‘the other crowd up the road’, which as we all know is priceless.

Imagine, by way of example, if you pitted the Skibb crowd against the Castlehaven crowd to reduce their carbon footprint?

I guarantee you they’d both reach net zero emissions within a calendar year.

Now all I need is a catchy title. Maybe All-Ireland Eco Wars? Or Friends of the Earth/Enemies of the Parish