FARAWAY hills are greener, they say. When I’m pottering about Dublin’s north coastline my thoughts often return to West Cork, where I imagine myself living some idealised version of rural life, inevitably involving daily surfing, rearing pot-bellied pigs or playing the blues in Connolly’s of Leap.

And whenever I’m out of Dublin for a while, I start to pine for Marino in the same way. I miss the ability to get cuisine from any corner of the world delivered to my front door within 20 minutes or being able to nip out to catch Bruce Springsteen in concert without needing to get out of my pyjamas.

Neither of these existences is real, of course, each one a confused construct of my own imagination and an example of the never-ending and self-defeating human tendency to look outside of the present moment for our happiness. Silly sods.

How confusing must it have been, then, for poor old Micheál Martin, out in Washington DC and getting himself all spic ‘n’ span to meet Joe Biden and hand over the bowl of shamrock, only to test positive for Covid and have to spend the whole thing self-isolating?

Faraway hills are green but it’s fairly galling when you actually, finally reach those faraway hills only to be confined to your flipping room.

So instead of pressing the flesh with the great and good of Irish America, and getting to high five in the Oval Office alongside the likes of Mary Lou, Rob Kearney, Fortycoats and virtually anyone with a trace of Irish blood within a thousand kilometres, poor Michael had to be content with putting the feet up to watch Bad Vegan with the rest of us.

Apart from some of The Contrariat on social media, most people seemed to feel sorry for the Taoiseach, and wouldn’t have begrudged him a Top O’ De Mornin’ moment with Sleepy Joe. Especially given all the bad news he’s had to deliver during The Covid Times.

Although many have dubbed him the unlucky Taoiseach, you’d wonder if isn’t all playing out quite nicely for Micheál given his personal approval ratings of late, some particularly strong media appearances, and the impression that there aren’t many viable alternatives within Fianna Fáil.

It’s the quiet lads that you feel a bit sorry for, that you have to watch.

WITH all the world turning their horrified gaze to the war crimes and the humanitarian crisis unfolding in Ukraine, it’s been unfortunate that reports of heatwaves at the north and south poles in recent weeks have more or less gone under the radar.

Temperatures in Antarctica reached record levels at the weekend, an astonishing 40 degrees above normal in places. Mark Maslin, professor of earth system science at University College London, said: ‘We have entered a new extreme phase of climate change much earlier than we had expected.’

I don’t want to be adding to any of your woes in this difficult period, but the pandemic and Putin’s war are likely to pale into insignificance if these projections bear fruit.

Mary Robinson, speaking recently on The Late Late Show, said we now have one ‘moonshot’ chance to solve the climate crisis, and this should, if anything, be accelerated by the geopolitical situation and Russia’s new isolation.

Will we do it, though? Are any of us really that worried? The very future and safety of our own children and grandchildren are at stake, yet we seem to be collectively spellbound by some strange apathy.

Ryan Tubridy was on the radio the other morning advising people how to cut down on their fuel use in an attempt to hit Putin’s wallet directly – driving more slowly, taking additional weight out of the car, not idling when stuck in traffic … Sure, these are great little hacks to cut our carbon footprints but reports the same day that 70 RTÉ executives share car allowances worth a total of €822,218 gives you a sense of the broader picture, and the bigger challenges ahead.

I was hopeful, however, when I heard about Clonakilty’s plans to become a net-zero town via a community-based solar farm.

It’s grass-roots, local-level leadership like this that we excel at in Ireland, and which will provide a beacon of hope for the next generation. Bualadh bos to all involved.

His friends are in low places

IT’S strange to be witnessing an information war unfolding on our small screens. Putin seems to have chosen to confront the most media-savvy president in history, Volodymyr Zelenskyy. Zelenskyy and his team are winning the war of persuasion in the most dramatic fashion, even dialling into parliaments all over the West to make the case for further measures to help protect Ukraine. By contrast, Putin appeared at Moscow’s Luzhniki World Cup stadium like some sort of tyrannical Garth Brooks leading a pro-war rally attended by thousands of flag-wearing ‘supporters’. He proceeded to denounce the evils of the West while wearing a €12,700 Loro Piana jacket. The big donkey.

Cracks are appearing, though, with Arnold Schwarzenegger posting a nine-minute video to the Russian people, telling them they are being lied to and appealing to their good sense. It was viewed by millions of Russians.

In a further display of defiance, Russian cosmonauts landing at the International Space Station dressed in the Ukraine colours. Presumably, the reach of the Russian secret police doesn’t extend to outer space.

I’ll tell you one thing, even though faraway hills are greener, after the events of the last few weeks, I’ve never been so glad to live in the West. 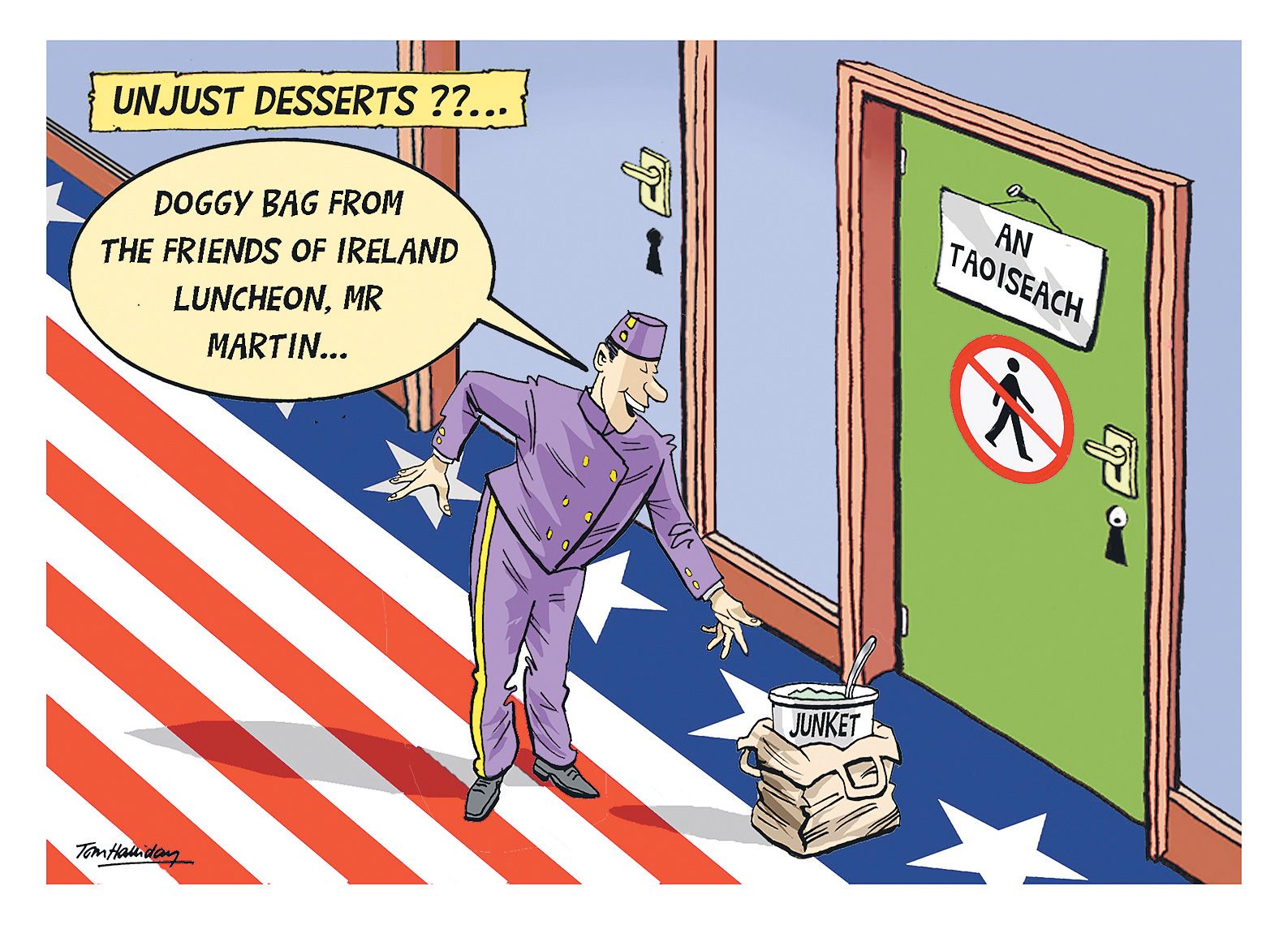