I WOKE Monday morning to an alert on the phone informing me it was Blue Monday, apparently the gloomiest day of the year, and there followed a long article with advice on ways to lift my mood.

This was The Irish Times, by the way. The paper of record, no less. I was feeling fairly chipper until I read it, too.

The January frost on my back lawn was glistening in the morning sun. The public health situation which I promise not to name was looking better than it had for months, with ICU numbers going steadily down.

2022 felt like a sunlit upland of positive vibes and untapped potential. But here was a certain paper telling me I should be feeling depressed. It got me thinking – who decides on naming these things in the first place? I have a suspicion that Black Friday, Cyber Monday and Cheesy Tuesday are mar dhea days created by marketers to blackmail us into buying more crap. In fact, I know this because I created Cheesy Tuesday myself in an attempt to justify all the smoked Gubbeen I’d purchased at the height of lockdown.

So I did some deep archival research (I Googled it) to get to the bottom of this Blue Monday nonsense – and guess what I found? Yep, Blue Monday was created in 2005 by the UK company Sky Travel which claimed to have calculated the date using an ‘equation’ by ‘scientists’ who definitely weren’t actors dressed in white coats.

So it’s basically a complete fabrication designed to cod us into booking our summer holidays to lift the January funk.

So next time someone comes telling you you’re supposed to be feeling blue, you know not to take an ounce of notice. And how could you be feeling blue anyway, with Cheesy Tuesday just around the corner? 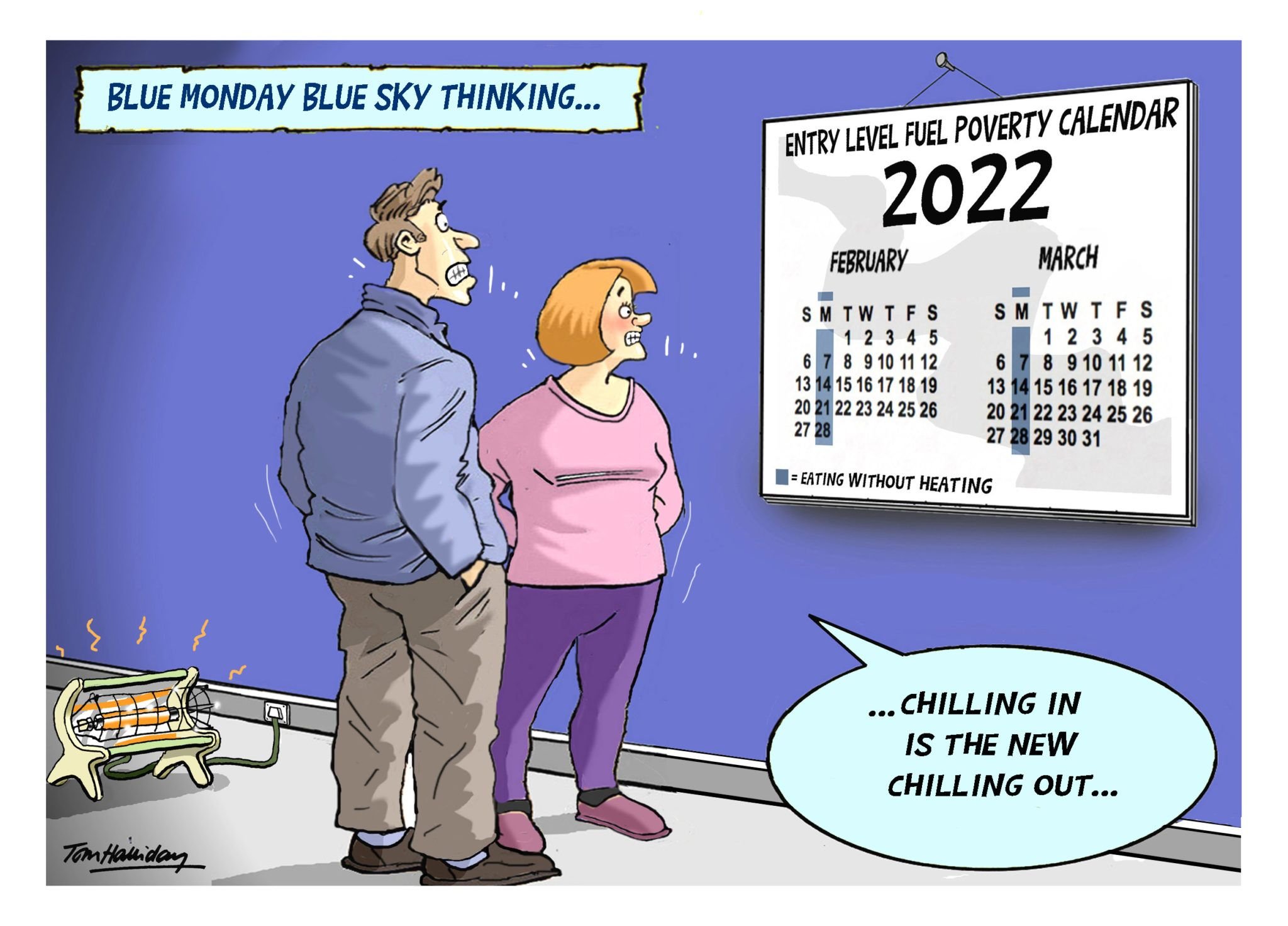 BLUE Monday isn’t the worst thing to emerge from across the water in recent times, of course. Boris Johnson’s Tory government takes that prize all day long.

I call it a ‘government’, but of course I really should refer to it as a ‘glorified students’ union Ents department’.

There’s arguably never been a better time for those of us whose guilty pleasure is to engage in a bit of post-colonial schadenfreude.

I reckon Michael Collins would have a fine smirk on his head if he could have read the headlines in the various UK rags these past weeks.

Given the spate of cascading revelations, it appears that contrary to widely held beliefs, the Tories could in fact organise a piss-up in a brewery.

It appears they were actually doing little else when the rest of the UK were confined to barracks at the height of the Covid restrictions.

There were BYOB sessions on the lawn and lockdown lock-ins on the eve of Prince Phillip’s death.

The events were becoming so regular they were dubbed ‘wine-time Fridays’ with No  10 staff even investing in their own fridges to keep their wine chilled.

It’s almost like they are engaging in some protracted experiment to see how much crap the British public will actually put up with.

At what point will Bojo actually be forced to step down? Does he need to give Covid to The Queen? Burn down The Rovers Return? Eat a baby live on television?

If this is what ‘taking back control’ looks like in the UK, then I say ‘long live our EU overlords’!

And just as the wheels seemed to be coming off with all the party revelations last weekend, culture secretary Nadine Dorries then announced that they were essentially dismantling the BBC as a public service broadcaster over the next five years.

What cultural vandalism, I thought.

And a great way to get the lockdown party revelations off the front pages too!

From Clare to there

THIS past week I’ve been immersing myself in the wonderful autobiography that is  Shared Notes by the renowned Irish fiddle player Martin Hayes.

It’s an open, moving and sometimes very funny memoir about a man immersed in the tradition, living a life given over to art, music and a deep consideration about what this musical heritage means.

Over the course of the book, Hayes recounts his very circuitous journey back to the musical simplicity of his roots.

There are tragi-comical attempts to become a frozen food entrepreneur in 1980s Ireland and stories from his many years on the breadline playing music in Irish bars across the USA.

At the heart of the book, though, is the story of a fascinating transition from a young man growing up on a small farm in Clare, steeped in the politics of Fianna Fáil, to a Seattle-dwelling, teetotal vegetarian artist who became more engaged with Eastern spirituality as his musical roots in Ireland ironically grew even deeper.

What emerges most clearly is the wonderful sense of community around Irish traditional music, a community that has stayed strong over the many years when the music was almost considered a joke amongst many middle class Irish people.

Luckily, there were those who persevered and, thanks to them, the treasure trove that is our traditional culture has been preserved for future generations.

One hundred years on from Irish independence, the music has arguably never been in a healthier place.