Beara GAA Chairman MICHAEL MURPHY – from Castletownbere – reflects on the division’s highs and lows in 2022, and its ongoing challenges like falling numbers and rural depopulation

KIERAN McCARTHY: On the field, this was a year of progress for Beara. The return of the senior football team. Beara Community School winning the All-Ireland colleges’ D football title. Beara U19 footballers winning the Premier 1 final. They are all positives. Have these successes brought the division and its clubs closer together – and how important is it for the future of the division?

MICHAEL MURPHY: Looking back, it’s been an exceptional year. Highs and not so highs. It was brilliant to see our senior team back training and getting games played in 2022. Hopefully next year will be a better one. To the players who didn't participate in 2022 for whatever reason, you are more than welcome in 2023. Our U19 lads did us proud to win the county, and winning the minors the year before is amazing. The Scoil Phobail Bhéara team winning the All-Ireland topped the year. Just recently the Beara U16 lads won the Premier 2 county final. I hope the lads realise what they have achieved.

KIERAN: Off the back of the underage success, how important is it for Beara GAA that these young players come through to the senior set-up and not slip between the gap between underage and adult football?

MICHAEL: It is really important that these players are facilitated and I feel we, the GAA community, have a duty to help make it happen. All players need games. If it’s all practice and training, no player is going to stick to that. We will need to see the master fixture list/plan for next year and see what can be managed. A lot of our lads are in Cork, Tralee, Limerick, Waterford, Carlow, Dublin and other places. Getting lads together is not easy. It will be difficult to get games for the U21 players as there isn’t a county competition.

MICHAEL: What a bunch of guys; they’re scattered around the world and still have an amazing connection. We thought it would be a handy bit of craic, run a golf classic, have a raffle where we’d raise a few bob, take the ’97 team to Páirc Uí Chaoimh on county final day and show everyone how old they’ve gotten. It couldn’t have been more different.

As you all know, their goalkeeper Pádraig Crowley has a health issue, and they, the team, wanted to help in having support in place for the future educational needs of his children. Things snowballed from then on. The GAA family far and wide stepped up.

A man who left Beara 70-plus years ago sent a cheque to help out. He still reads the Beara notes in The Southern Star. Another person who lives close enough to Creeslough in Donegal, where they had their own misfortunes, heard of our plight and stepped up. A fella in Ballinspittle who was at the ’97 replay felt he should help out and contributed. Connie Paddy from the 1967 Beara team set up a table and chair outside O’Brian’s filling station to help sell tickets. These are just a few of the many people who have blown us away with their support and generosity. Thank you all for the help and the support you have given Pádraig and his family.

KIERAN: In his secretary’s report to the Beara GAA Convention, Joseph Blake commented ‘Falling playing numbers at underage and at adult level are having massive consequences for all the clubs in the division’. How is this being felt by clubs in Beara?

MICHAEL: Falling player numbers are not unique to Beara. It’s all along the western seaboard. Clubs do worry about this. A typical example is my own club Castletownbere where five lads have emigrated to England, Australia and Canada this year – that’s a third of a team. It’s not rocket science to figure out why.

One of the reasons is, I feel, we have lost control of our long-term future to a planning system that simply does not serve the people trying to live and survive in rural Ireland. We need young people to be able to survive and it’s extremely hard. It is in our DNA to want to live and own our home. With the rollout of broadband nationally and people being able to work quite successfully from home I felt it’s an opportunity lost that younger people can’t be facilitated to build in rural Ireland.

The fishing community, which is the main source of employment in Beara, is struggling. The current national decommissioning scheme, if it achieves the target of removing 60 boats with an average of five crewmen per boat, is 300 people directly gone from the sea. For every person at sea there will be two to three ashore in the spinoff so that’s putting 1000-plus out of meaningful employment. Beara won’t escape a lot of this.

We can’t dwell on the doom and gloom. We have a lot of good players coming through the current system so let’s look after them. The Beara Board Strategy review sub-committee, including Beara Ladies GAA guided by Jim Hanley of Bere Island, is currently working on player numbers and how best we can plan for their future. This will be completed in the next couple of months.

KIERAN: Do you think the GAA has a real grasp of the concerns and challenges felt by rural GAA clubs, like in Beara?

MICHAEL: I think the GAA knows about the issues and concerns we have. If they don’t it’s our fault for not getting the message to them. Our county board makes itself very accessible to communication. Also, I think everyone gets caught up in their own world or club, call it what you may. The GAA knows where we are but the logistics of rural life and travelling is just frightening. Recently a few of us attended a meeting at 6.30pm in Páirc Uí Chaoimh. Paudie Bernie O’Sullivan left his home in Garnish at 3.40pm in the afternoon and with traffic we just arrived at 6.30pm into the meeting. The traffic was a bit lighter on the way home. All in it was the guts of an eight-hour round trip. We must get an improvement of the services provided by the GAA into our division to help alleviate some travelling. 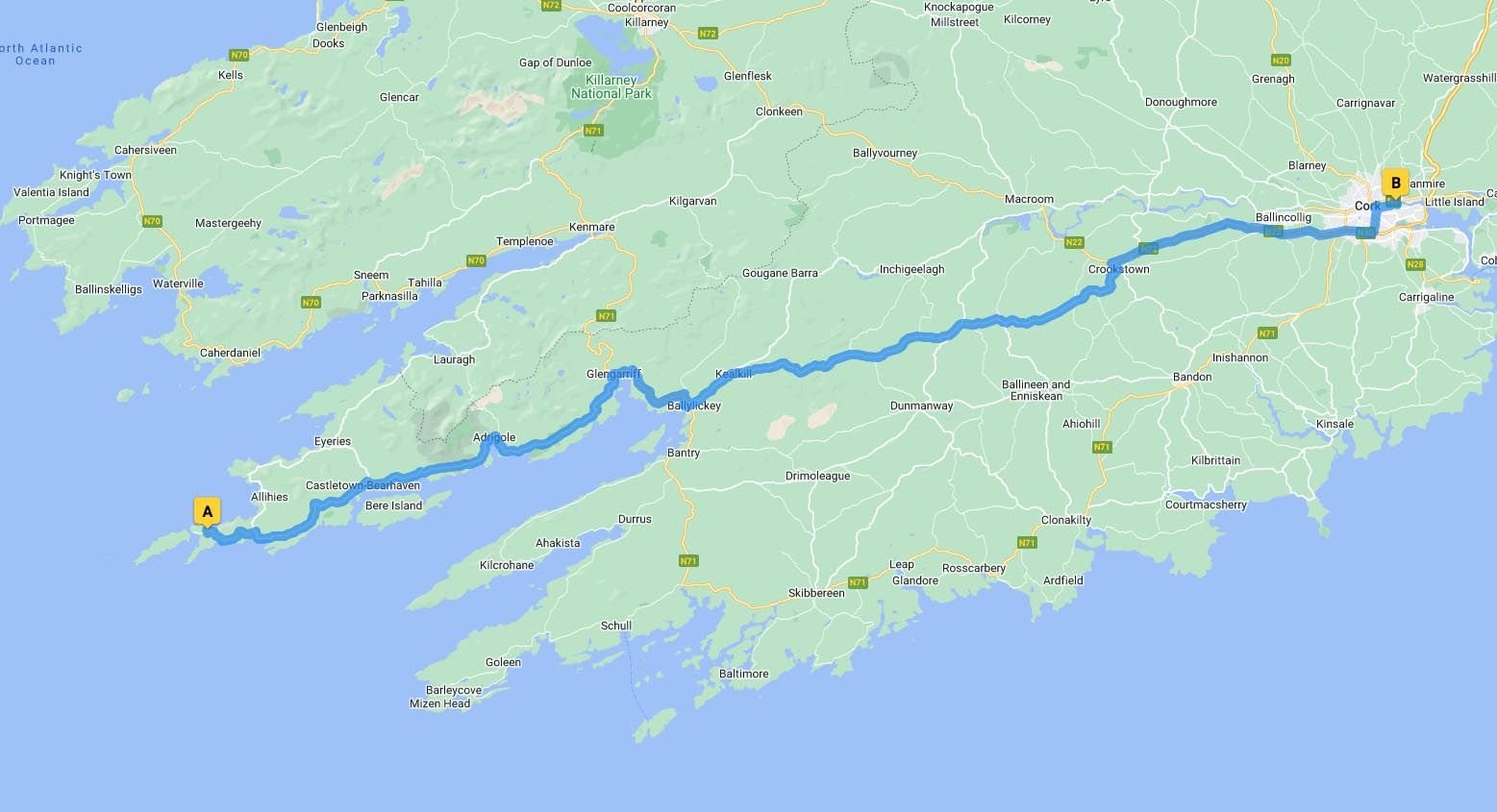 The journey from Garnish to Cork GAA HQ in Páirc Uí Chaoimh is, according to AA Route Planner, a five-hour round trip.

KIERAN: The possible changing of the minor age grade – from U17 back to U18 – and the decoupling that could come with it, will have a big impact on rural clubs. Tell us your thoughts on this.

MICHAEL: With regard to the age-grade change, obviously both options have good and bad points. I think the move into the current grades of U17/ U19 and just running it for a year is too short a time to give it a chance to work. A lot of confusion came with it and over a couple of seasons a lot of issues would have been overcome. But that doesn’t really matter now as the county board convention motion was voted on recently.

However, bringing the decoupling age to U18 is just a massive mistake and I feel players develop differently in their teenage years. You can have a player who was brought on to play for 15 minutes of games coming up through the years and by U18 he’s your starting full back; this player needs to be playing with a higher standard of players to continue his improvement. To basically stop this is like taking a gap year at the most critical time in the player's life.

Another point I would like to make is with the decoupling at U18 goes, has a big stick been created to beat ourselves with? Nothing is forever. Society is changing at the moment and it’s the rural areas that are low in numbers. Who’s to say that areas that have rising numbers at the moment won’t be lock-up areas in a few years’ time? We all know of larger towns who in the past had plenty of children living in the town centres or around it. Then the children have grown up and moved away. What were homes became small businesses, they seem to be getting scarce now too. I would like to ask what kind of competitions will be run for clubs with small numbers. Will 15-a-side be a thing of the past? Will 11-a-side be the norm? This will bring a different quality of player into existence and he may never transition onto a 15-a-side game at a level good enough to feed into the county panel.

KIERAN: What does the future of divisions – and divisional boards – look like?

MICHAEL: The future of all divisions and the boards will continue if there is a need for what they do. It’s hard to say where this road is going to take us. I feel that the Beara board and all the Beara club boards realise that our young people have so many obstacles to contend with and if all the work we do makes the place better for them that’s a good thing.