PHIL Healy has moved a huge step closer to becoming an Olympian.

The Ballineen bullet (26) played a starring role as the Irish mixed 4x400m relay team qualified for this summer’s Olympic Games in Tokyo.

Healy’s heroic effort in the second leg of last Saturday night’s heat at the World Relays in Silesia, Poland was crucial in the Irish team finishing third in the race – and their time was fast enough to send them through to the final but also book their spot at this summer’s Olympics.

The team of Healy, Sharlene Mawdsley, Chris O'Donnell and Thomas Barr also smashed the Irish record with their 3:16:84 run, as well as booked their place at the 2022 World Championships in Oregon.

In Sunday’s final, the Irish team – with Andrew Mellon replacing Barr in the line-up – finished seventh, but they had already achieved their main target: Olympic qualification.

‘It’s a brilliant feeling to have qualified the team for the Olympics,’ Healy told The Southern Star.

‘Our heat on Saturday was the third heat and while we were in the call-room we had seen the first two heats so we knew that we needed quicker than 3:17:9.

‘After the race it took ages for our time to come up on the screen and we wanted to see the ‘Q’ next to our name to know that we had qualified. It was a great feeling.

‘It’s very exciting knowing that you have one race that can possibly secure an Olympic spot – you will never have that in an individual so it was unreal to have the excitement.’

What an incredible run by @philhealy2 and the entire Ireland 4x400m mixed relay team who are through to the World final tomorrow & have also secured Olympic qualification!@TomBarr247 @sharlenem229 @cfccod pic.twitter.com/5atI1G8Lvz

This was the first time this Ireland mixed 4x400m relay team had raced together so there were a lot of unknowns before the World Relays – but they looked at home on the big stage. Key to Saturday night’s Olympic qualification performance was Healy’s second leg. She covered the first 200 metres in 23.20, just 0.2 of a second off her Irish 200m record, while Healy’s 36.5 for the first 300 metres is, according to her coach Shane McCormack, half a second quicker than the fastest 300m ever ran by an Irish woman outdoors. Impressive figures, but as Healy explains, her surge was very important for the second half of the race.

‘I hadn’t run a 4x400m since 2017 so I was nervous but I knew that if I didn’t make the break (at 200m) in a good position, then it’s game over from there because there is too much traffic once everyone cuts in,’ the Bandon AC star said.

‘I had to push it through the first 200 metres. I had a split of 23.2 for the first 200 and that did cost me in the last 30 metres – but if I didn’t do it, the team wouldn’t have been in contention and the team, possibly, may not have qualified. That was my job – to go out and put the team in the best possible position.

‘Based on where you are at the 200-metre mark on the second leg, that’s how they line you up on the changeover then for the third leg. Because I was first at the 200-metre mark Sharlene was then on the inside when I was passing over the baton and it meant that I didn’t have to run wide; that saves time as well. It helped set us up from there.’

The end result is that the Irish mixed relay team has qualified for the Olympics and while the final team selection won’t be confirmed until closer to the Games, Healy is extremely likely to be named on the team. Still, she expects the competition for places to be fierce in the coming weeks and months.

‘We were the ones that got the ticket to Tokyo but that means nothing now. It will come down to who is the fastest,’ Healy explained.

‘Thomas Barr’s aim was always to go and qualify the team, but he was never going to be running in Tokyo with the team if it qualified because the relay is the day before his individual event. We know that there is an availability for another male spot on the team.

‘The women’s side is wide open too – anyone can come in and take our spots. That will drive everyone on because no-one is secure in their spot and everyone has to step it up.’ 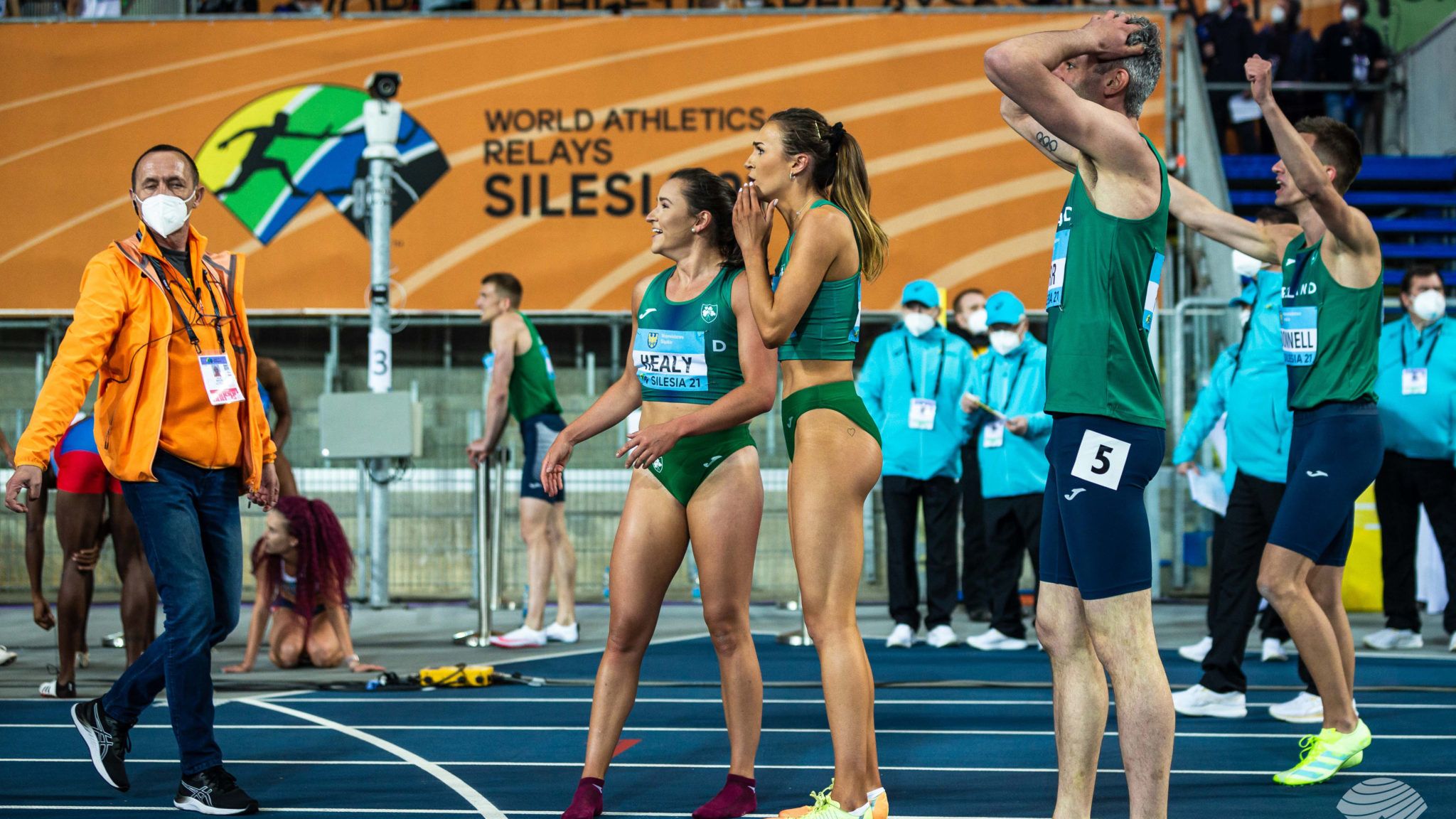 The magical moment that Phil Healy and the Irish mixed 4x400m relay team found out that they had qualified for the Olympic Games.
(Photo: Dan Vernon)

It means Healy’s dream of becoming an Olympian has taken a huge step forward, and she’s also in a very good position to qualify in the women’s 200 metres as well – she’s comfortably inside the top 56 that gain automatic qualification. Again, this won’t be confirmed until the end of June when the qualification window closes.

Between now and then she will compete in a number of 200m and 400m events, as she targets doubling up on both at the Olympics if she gets the ranking points she needs in the 400m.

‘I will start racing again at the end of May and it all kicks off there because it’s a short window until qualification ends at the end of June,’ said Healy, who landed back in Ireland from Poland on Tuesday.

‘We have two weeks of competition lined up in May. First up is the Belfast Irish Milers Meet on May 29th. Then it's onto Sweden, The Netherlands and Switzerland, with a mixture of 200m and 400m. Fingers crossed they go well and I can push myself up in the rankings of both.’

And now she has the comfort of knowing that she will be on the plane to Tokyo in July.

‘There is always the unknown in the individual but knowing you have a guaranteed ticket is a massive relief,’ Healy added – as she took a huge step closer to becoming an Olympian.